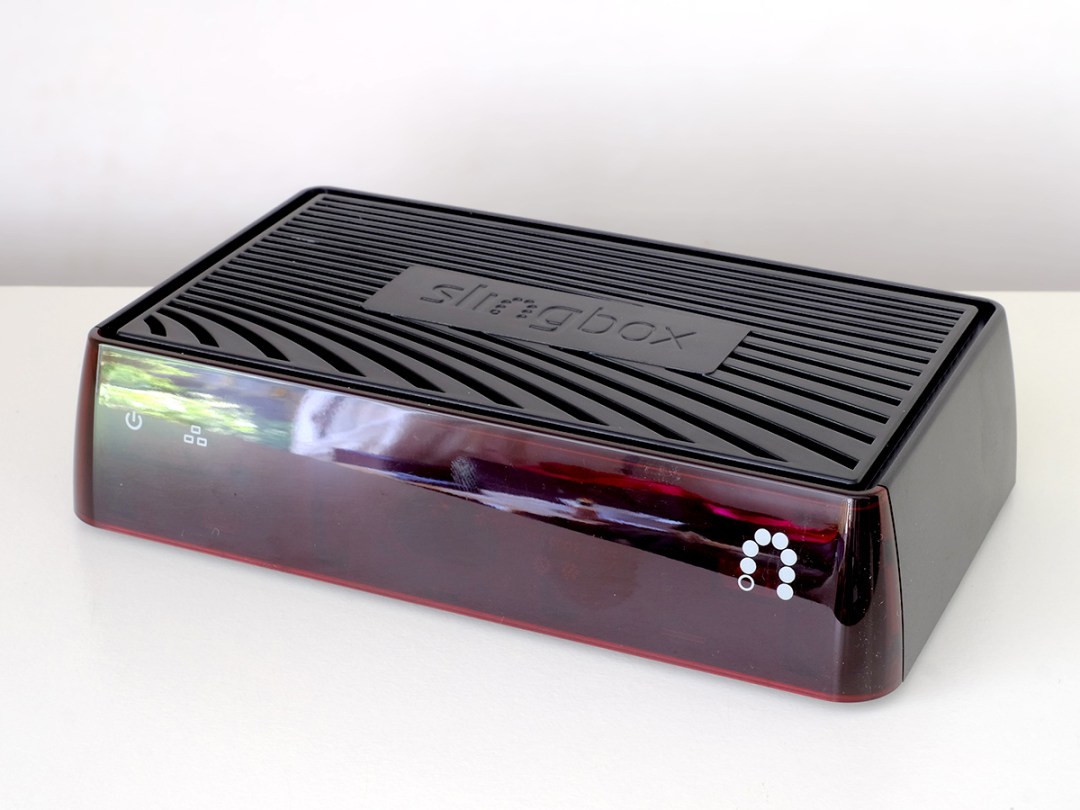 The need for DVRs is fading away. Heck, most of the time I don’t use a TV tuner anymore, even when watching TV. However, there are still ways to get the experience and content of your DVR or Sky Box on your phone, laptop or tablet. The Slingbox M1 can make it seem almost like you’re connected to your home entertainment kit, even if you’re a hundred miles away.

Distance is no object, and that can be very handy when travelling abroad as your Netflix, iPlayer and Amazon Instant Video apps won’t work when you’re not in Blighty (at least not without some naughty VPN masking).

Once setup the £120 Slingbox M1 does work well, especially given how much scope there is to mess up with something like this. If you’re still in love with your DVR, it’s a pretty great solution.

However, it’s also quite a money-grabbing one that demands some patience and understanding.

The Slingbox M1 is sold as a way to get the experience of your home set-top box on-the-go. Sure enough, that’s what it does. But the best way to understand it is to break how it works down a bit more.

It’ll do the same job for just about any IR remote-control device that outputs video over Scart, S- video, component or (with a bit of effort) HDMI. That’s just about anything under your TV bar a game console, then.

What the Slinbox M1 actually does is to act as a middle man. It sucks the video content from your set-top box, blurts it up into the cloud over your Wi-Fi connection and over to your phone, laptop or tablet, whether they’re using mobile internet or the a Wi-Fi hotspot of a coffee shop in Antigua.

You then control whatever the Slingbox M1 is plugged into using an IR blaster that you place in front of the sensor of the source, itself controlled through the Slingbox app. It’s like a parasite, just a really helpful one.

So, while the Slingbox M1 works best for thinks like PVRs, you could actually plug it into a DVD player, CD player or £15 Freeview box. Loads of stuff. There’s a reasonably huge database of devices in the Slingbox app to get you up and running with the right remote commands, although many of you will have to find a ‘similar’ device from the same manufacturer. But all the devices I tried were catered for in the end.

Realising how many things can be used with the Slingbox M1 made me think, “well that’s pretty cool”. However, you have to chomp through a few things that might leave a bitter taste in your mouth before you get to that stage.

First, while the Slingbox M1 costs £120, the version we got only comes with the cables needed to hook up SD-quality Scart and S-video sources. I never thought that in 2015 I’d end up dealing with Scart cables again.

You probably want to stream in HD, right? You’ll need a component cable then, which doesn’t come in the box and will cost about a tenner from the likes of Amazon or Maplin. But of you’re a Sky user even a one of those won’t help you because Sky dropped component from its HD boxes years ago. Here, horrible old standard-def composite is your only option.

You’re probably wondering: why the hell doesn’t the Slingbox M1 just take HDMI? It’s what everyone uses. The issue is that an awful lot of HDMI streams use security measures to stop pirates from, y’know, pirating. So in order to fire it across the internet it needs to use an analogue signal, stripping out the HDCP protection.

Couldn’t the Slingbox M1 do this internally? Technically it could. But it doesn’t. The more expensive Slingbox 500 has an HDMI input, but doesn’t appear to offer the digital-to-analogue conversion needed to side-step HDCP either.

It’s also worth remembering that you can only plug a maximum of two video sources into the M1, one over component, one over S-video. And even then you need to make sure the IR blaster can communicate with both.

It’s pretty limited, in other words.

That’s because while the Slingbox M1 seems advanced, what it actually does has a physical, ‘mechanical’ side to it. It’s really quite out-of-kilter with the way most of us treat digital content these days.

It is, however, reasonably versatile in terms of what can catch the video and audio content at the other end. There are apps for Windows, Mac OS X, Android, iOS and even support for Chromecast.

How Slingbox treats these apps is pretty suspect, though. So, you’ve just spent £120 on your video streamer, you should be good to go, right? Wrong. As well as having to fork out for a component cable, you have to pay for mobile apps too.

Handing over £9.99 for a not-exactly fantastic Android app felt pretty painful, while the iPhone app costs even more at £10.99. Sure, the Mac OS X and Windows apps are free, but are also loaded with ads unless you use full-screen mode (which is often not actually full-screen with SD content).

It seems Slingbox knows things like the M1 only have a few years left before they become redundant, and is squeezing every penny of revenue out of them while there’s still an audience left.

Not turned off yet? In practice it works pretty well. It transmits at high enough quality to hide that it’s effectively swallowing the original video signal, then regurgitating it, bird-like, for your eyeballs. And as it’s done through an analogue signal, there’s plenty of room for quality loss. Even the SD Scart signal from a DVD player I plugged in looks reasonable, if very soft compared with what we expect these days.

With a good internet connection the Slingbox M1’s performance is very solid. I noticed some tiny millisecond glitches when switching away from the app using my trusty MacBook Pro, but that could be as much down to system resources as anything else. A solid internet connection at both ends is a must, though: remember that your home Wi-Fi is uploading the video as well as it being downloaded at your device’s end.

All this work in the background also means there’s a slight delay in any remote commands you issue using the virtual controls of your mobile/laptop app. I didn’t find this delay too annoying as there’s only so much tapping you do in video-viewing. However, it’s a reminder that this approach to streaming isn’t the future, it’s a stop-gap up-cycling of the old ways of TV.

The Slingbox M1 is very much a one source video, one point of output deal too. Try to use the phone app and one of the laptop/desktop apps at the same time and you’ll be prompted as to whether you want to nick the stream off the original steamer. Only one can run at a time.

There’s also no web portal option, making it seem much less nimble. Let’s not forget too that unless you’re going to do some fiddling Google/Apple accounts, any family members who want to get on-board with their phones will have to pay another tenner for the privilege.

The Slingbox M1 is a device from a class of streamer that’s quietly bubbled away in the background over the past few years. And aside from support for things like Chromecast, parts of it are starting to feel increasingly clunky now that we’re getting used to having things like Netflix at our fingertips.

However, if you’re still tied to your set-top box the Slingbox M1 will do the job of firing content over to you, wherever you may be.

One of the biggest issues is just getting you to like the thing without feeling a tiny bit exploited. There are no-doubt reasons for plugging the OS X/Windows apps full of ads and charging a small fortune (relative) for the mobile apps. Reasons to do with offsetting ongoing costs and keeping the initial price low, but having to foot the bill just doesn’t feel good when it lands at your feet.

It’s starting to feel quite dated, but this is a good option for frequent travellers

Works with loads of different hardware

Fiddly and a bit limited