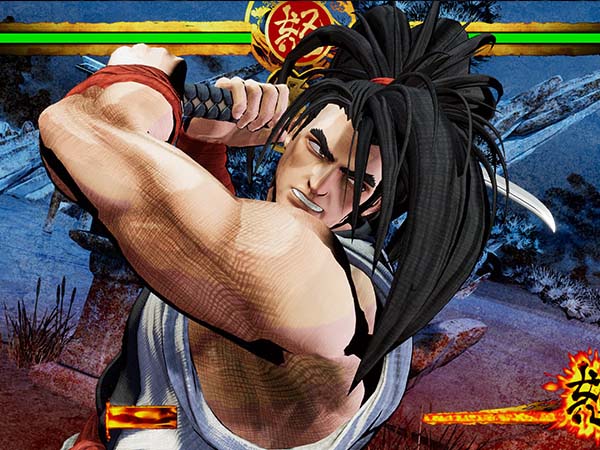 After years in meditative hibernation, this once-lost Shogun warrior has reemerged to do battle with old nemeses Street Fighter and Mortal Kombat, and to take a few arms home with it in the process.

While not as complete and polished as its big-name rivals, SNK’s re-imagined classic Samurai Shodown is a more measured, sudden and thoughtful fighting game than its peers, but also one that’s surprisingly easy to get into. Hajime!

The obvious difference between Samurai Shodown (yep, no W in that name) and its 2D-fighter peers is weaponry. They’re not just there for effect, either – this is very much a fighting game that wants players to feel just how dangerous those shimmering blades can actually be. Attacks can do absolutely enormous damage if timed correctly, and therefore it doesn’t pay to try and jump in button-bashing – a cool headed opponent will simply parry or sidestep predictable attacks and slash off half your life in a single blow.

This isn’t Bushido Blade or For Honor, though. The game’s roots are still firmly in the arcade tradition, with quarter-circle special attacks, projectiles and giant 15-foot jumps, but bouts play out noticeably different from Street Fighter’s, or even SNK’s own King Of Fighters. Typically, they’re more cautious and defensive, with lots of footsie play and a general hesitance to commit to anything.

On the other side, if you’re a confident, aggressive player, you can blast through a timid opponent’s weak defense and flatten them like a monster truck rolling over a hot wheels set.

Be warned, though – this isn’t a fighting game for the kids. Every blow sends showers of claret into the atmosphere, which splatters all over the combatant’s garb, and if you finish a match with a heavy strike, you can cleave your opponent in two or slice off a limb. It’s surprisingly gruesome – weirdly more so than the OTT gore of Mortal Kombat 11 – just leaving your strewn foe in two bits on the floor.

One interesting aspect of Shodown‘s combat is weapon-disarming. There are a number of sneaky moves that let you whack the sword out of your opponents hands, leaving them to scrap with their bare fists until they can regather their weapon. These moves are tough to execute, but time it correctly and you could suddenly find yourself with a free run at your defenseless opponent’s carotid artery.

Saying that, there is an even sexier technique if you do get your weapon knocked down. This takes immense timing, but you can actually catch your enemy’s blad in your open palms and strike them down, giving yourself enough time to grab your own weapon, and disarming them in the process.

It makes you look like the god-like child of Neo and Bruce Lee, but please don’t try this in real life. Even for a YouTube challenge video.

Samurai Shodown is a pretty slim package compared to most modern fighting games, but it does include an interesting mode – Dojo. Here you battle ghosts of random players from around the world, all the while improving the ghost data of your own fighter. It’s asynochronous, so you’re not actually playing a real person, but the AI data does a decent job of making your enemy actually feel like its being controlled by a human – weird habits, stupid mistakes and random jumping all included.

There’s no real purpose to playing this mode other than to improve your own skills – the game doesn’t have a huge selection of cosmetics or unlocks – but it makes for a nice change of pace to battling the in-built AI, and is obviously far less intimidating than venturing into online ranked play.

Saying that, it’s actually proven very difficult to find opponents in online ranked play – perhaps due to the relatively niche appeal of the game – so Dojo provides a decent middle ground.

TALE OF THE TAPE

As is customary these days, Samurai Shodown includes a story mode, but don’t get excited about playing an MK11-style cinematic journey through feudal Japan. Instead, you have a series of fights against the rest of the roster, interspersed with some slow, uninteresting narrative text, and brutally long loading times (they’re pretty bad all through the game, in fact).

And in typical fighting game fashion, the final boss is cheap and aggravating. If you’ve got the patience Musashi Miyamoto and for some reason can’t get enough of badly-written Samurai fiction, then you could find some enjoyment out of crawling through this mode with every character, but for everyone else, it should be avoided quicker than a katana-slash to the belly.

There’s not a lot there for your money, but the actual fighting is about as good as it gets.

Clean, interesting, measured and violent – Samurai Shodown has a different feel and pace to its peers, surprising depth, and just enough absurd violence to keep the maniac inside you smiling. Providing you have someone to fight, it’s close to being a combat classic.

A slight package containing a very strong 2D fighter and not a lot else. If you’ve got real-world opponents though, it’s close to essential

You can cut a man in half