After a few awkward years, a new first-person perspective in the most recent entry finally modernised the Resident Evil series while returning it to its horror roots.

Resident Evil Village retains that same perspective and character, putting you back in the shoes of Resident Evil 7 protagonist Ethan Winters, but is also an opportunity to take an even bolder step into what the series can do with its first entry in next-gen.

In recent years however, Capcom has also been keen on revisiting past glories with remakes of Resident Evil 2 and Resident Evil 3. That’s also the case for this eighth mainline instalment, which doesn’t quite represent a great leap forward for the series so much as it pillages from what’s gone before.

Nothing but blood and death

Resident Evil Village takes place three years after the events of Resident Evil 7 (with a couple optional videos and reports to bring you up to speed) as Ethan and his wife Mia have relocated to Eastern Europe starting a new life with their newborn baby Rose.

That familial bliss doesn’t last however as their home is suddenly attacked by a military team led by … Chris Redfield(?!). Before you can figure out what the hell’s going on and whether the series hero has turned to the dark side, you wind up in an eerie village that looks like it’s from another time, where Ethan spends the entirety of the game in search of his daughter.

For a character whose face we never see, Village does a lot more to try and make you identify with Ethan, who really gets put through the wringer in some gruesome ways. He’s undergone military training in the intervening years so he’s more capable with guns, although combat is still clunkier than your typical first-person shooter). Unfortunately, you won’t get a chance to get attached to any of this godforsaken village’s survivors, who all meet their demise pretty quickly. As one character remarks, there is “nothing but blood and death”.

The characters that make more of a lasting impression, then, are its villains – each one standing out thanks to their grotesque exaggerated designs – and the village itself. While not exactly open world, it’s still one of the largest environments seen in a Resident Evil game, taking you to some wildly different locales, from a creepy castle to a seemingly massive underground factory.

The castle is arguably the strongest section of Village, where its darkly lit claustrophobic corridors, gothic decadence and clever puzzles hark back to classic Resident Evil. It’s also home to the scene-stealing vampirific giantess – and meme queen – Lady Dimitrescu and her thirsty insect-ridden daughters, whose pursuit of you is probably the most chilling, even if they don’t turn out to be so physically threatening as being chased by Nemesis.

Village, though, finds itself struggling to reach the same highs after this section, and although there is a lot of variety on display, with monster designs that escalate in challenge, Lady Dimitrescu casts her long shadow over them all. There’s also quite a bit of backtracking, which while common in the series does drag when the setting isn’t a mansion but a whole village.

It’s not quite the next-gen Resident Evil experience some had anticipated (especially since it’s also available on last-gen consoles), which is more apparent with how much it tries to recapture elements from Resident Evil 4. There’s the tense and chaotic ambush at the start of the village where you’re literally saved by the bell, the way you can play inventory Tetris with your items in your briefcase, or the way defeated enemies drop money, which can then be spent on items and upgrades sold by the game’s quirky merchant calling himself The Duke.

Sure, if you’re going to steal, then steal from the best. It does however invite unfavourable comparisons with one of the greatest games of all time. As nostalgic as it is to see these elements return, and as intriguing as Village‘s scenarios can be before its third act goes off the rails in a way only those with an interest in Resident Evil‘s absurd lore will appreciate, it never comes close to matching RE4‘s novelty, surprise and embarrassment of gameplay riches from more than 15 years ago.

Although it’s a larger game world, Village‘s length matches that of previous instalments so you can expect to wrap the story up in about 10 hours. That’s including taking the time to explore the village to find all the optional treasures and upgrades. One especially ludicrous touch is that you can also hunt animals and give their meat to the Duke to cook up meals that boost Ethan’s stats.

But as with the RE2 and RE3 remakes, there’s plenty of incentives to replay, where completing different challenges nets you points to unlock new stuff like weapons, figures and loads of concept art, with the latter being especially insightful for fans wanting to know more about the lore and design covering both RE7 and Village.

The highlight however is Mercenaries, again first introduced in Resident Evil 4, which is unlockable after beating the main game once. This arcade-type mode takes you on a silly but entertaining shooting gallery across the game’s different locations under a time limit, while you can also collect orbs that gift you with buffs like extra damage for long-range weapons or slowing enemy movement.

It’s a fun diversion but there’s a decent challenge with trying to get a decent score, based on how many enemies you kill, your kill combo bonus, as well as taking into account your leftover resources, while you need at least an A rank in order to unlock the next course. Of course, there was also meant to be PvP mash-up Resident Evil Re:Verse included, where players pick characters from across the franchise history to fight against each other, but that’s been delayed until later this summer.

It’s perhaps apt that, as Resident Evil celebrates its 25th anniversary, Village ultimately spends its time looking back more than it does push things forward.

There’s a terrifyingly terrific time to be had exploring the village and overcoming its monstrosities, but while it does its best to combine RE7‘s first-person frights with RE4‘s delights, it’s mostly a pastiche rather than an experience bringing something wholly new to the table.

Learns from the best of new and old Resident Evil games, but stops just short of greatness

Great variety in environments and enemies

Recaptures a lot of elements from Resident Evil 4

Mercenaries mode is a hoot

A two-punch combo to make your home office super slick 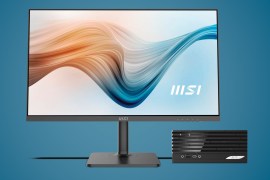