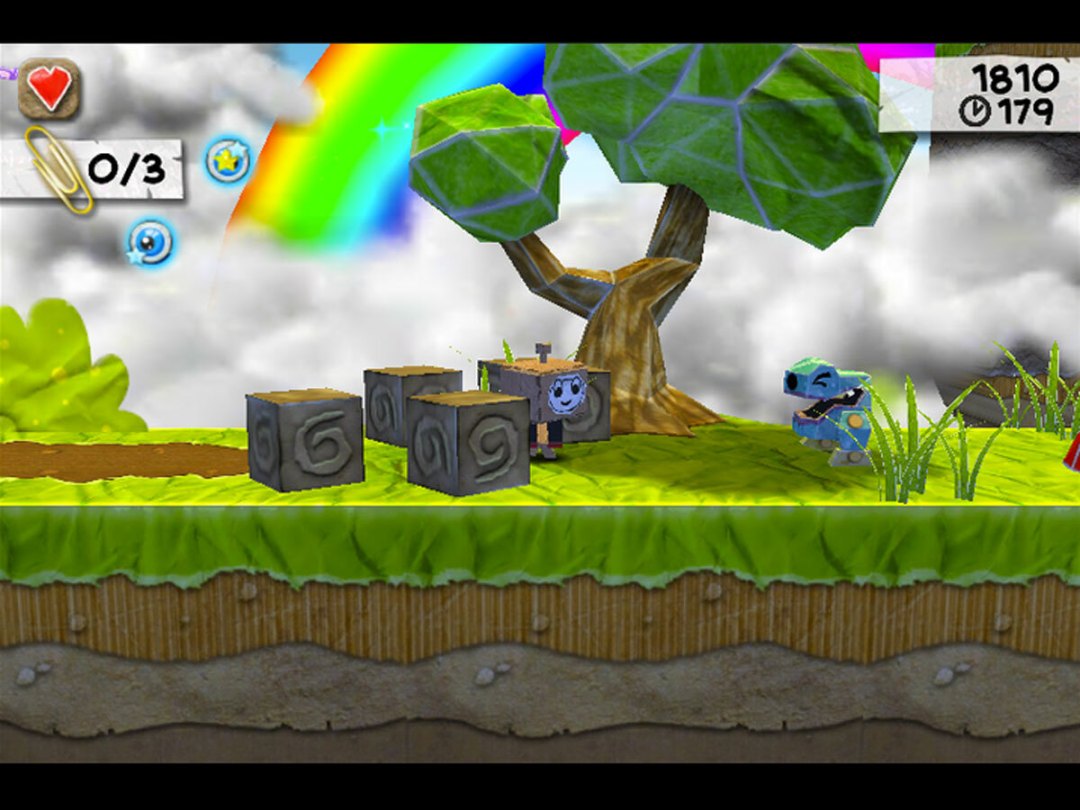 Platform games are a tried and tested formula. So why try and fix what ain’t broke? That’s certainly the motto that the makers of Paper Monsters seem to have lived by, and much to the game’s credit.

You play as a nameless hero – a character that can only be described as a perpetually-smiling cardboard box boy – in a world made from paper. The evil Lord Papyrus and his minions have taken over the world, and you’re the guy looking to save the day.

There are 16 levels in the main adventure for you to traverse, with the choice of an on-screen D-pad or virtual joystick on the left to move and a tap on the right side of the screen to jump (a double tap produces a double jump). Later in the game you take different forms, including a missile-firing submarine or a flying box boy, complete with a propeller on your head.

These simple controls make the game easy to pick up, while its familiar platform mechanics makes it easy to play too. Enemies are dispatched by jumping on top of them Mario-style, and oversized pipes will take you to a bonus part of the level, that you couldn’t otherwise get to. The game’s currency is buttons instead of coins, and can be used to customise your character’s outfit in the game’s shop, similar to LittleBigPlanet.

Despite the nods to platformers that have come before, Paper Monsters still feels like its own beast. The colourful level design offers just enough challenge to keep casual gamers on their toes, with extra areas to discover and hoops to jump through for gamers with the exploring bug.

Additional challenges include rounding up three golden paperclips hidden in every level – often in seemingly-inaccessible areas – as well as special golden buttons (worth 50 silver buttons) and adventure cards hidden throughout the levels, lending added depth to the main gameplay.

Paper Monsters is a bargain for its small price, with no in-app purchases needed for more levels or to improve the experience. Platform pros may find they make short work of the main game, but there are a number of bundled sidegames to try your hand at – including an endless running mini game that’s great in its own right and two main story extensions, themed around Halloween and Valentine’s Day.

From the controls and design to the soundtrack and gameplay, Paper Monsters is an absolute delight to play. If you’re looking for a gorgeous-looking platformer with that pick up and playability, you’ll find everything you need and more with Paper Monsters.

Available for iOS and Android