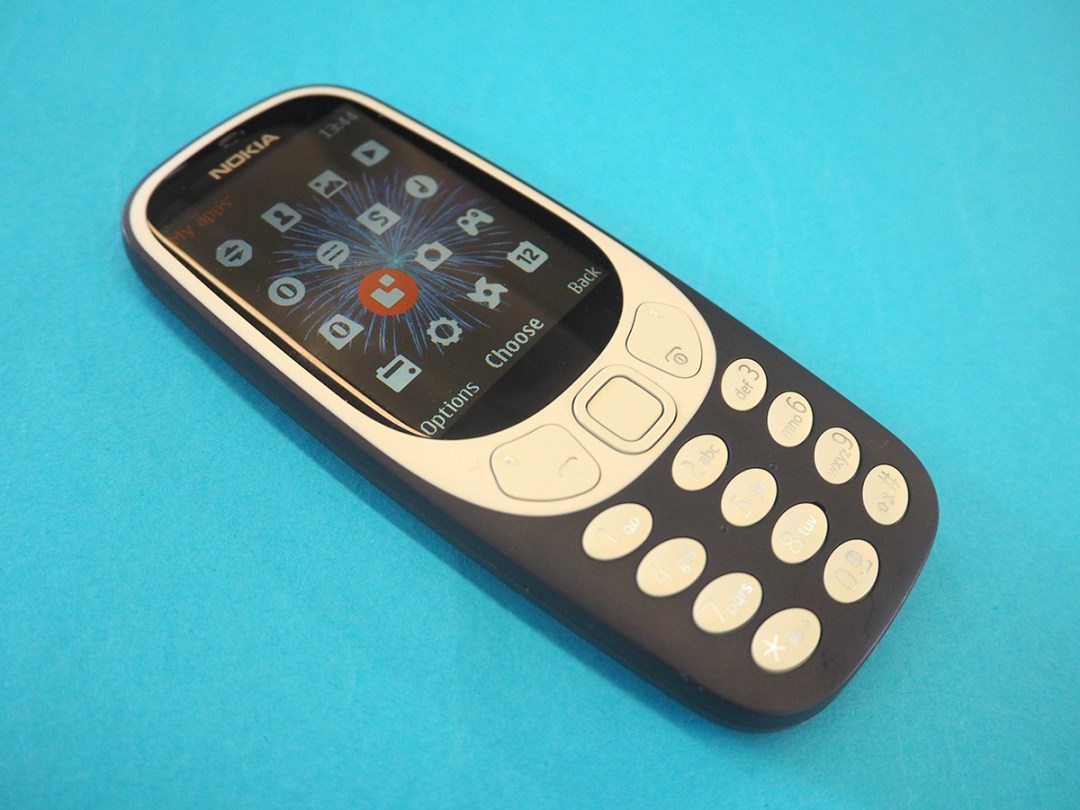 Tamagotchis. Cassette walkmans. The penny farthing bicycle. They all had their time, but now they’ve all been resigned to history.

Until February, you’d have put Nokia’s iconic 3310 among them. But not any more – it’s back, rebooted and ready to cash in on our demand for nostalgia. Hey, anything to distract us from Brexit, Trump and whatever else 2017 is going to throw our way, right?

If you’ve been dying to type out messages in T9 text speak, the 3310 fits the bill, and it’s got battery life that’ll shame the smartphone sat in your pocket right now, but is that enough?

Time to take off those rose-tinted glasses, and see this phone for what it is: a nostalgia-laced marketing ploy that you really shouldn’t waste your cash on.

With its curvy plastic shell, the new 3310 shows an unmistakable likeness of the original – only this 2017 edition is thinner and lighter. All that plastic means it won’t shatter into a million pieces if you drop it, too – not something you can say about a modern smartphone.

You get a few more buttons beneath the screen this time around, but the two-tone colour scheme is straight out of old-school Nokia’s design handbook. The whole thing feels unmistakably cheap, though – even if the looks might earn you a few retro points when you bust it out on a hipster burger joint.

You can’t replace those front and back shells like you could before, either – the colour you pick will stick with you for the life of the phone.

Look around the edges and you’ll spot a few modern touches, such as the 3.5mm audio socket and microUSB port for charging. There are no proprietary connectors this time around.

Prise off the back cover and you’ll spot a microSD card slot nestled next to the microSIM slot, for taking your tunes with you on the move. It’s practically a necessity, as the phone has a frankly pathetic 16MB of storage – and only 4MB of that is actually available to use.

There’s a removable battery, too, because why not go the whole hog on retro features?

You’ve really got to force that rear cover off, which could be a pain if you’re planning on regularly swapping your SIM card back and forth between this and your main phone.

In case you hadn’t sensed a pattern here already, the 3310’s screen is as basic as it gets. I really hope you weren’t holding out for AMOLED or a 4K resolution.

At 2.4in, it looks absolutely tiny next to a current-gen smartphone, and the WVGA, 240×320 resolution is blocky and pixelated. Brightness is mediocre, and when you take it outside you’ll struggle to see anything on it at all.

It isn’t touch sensitive, of course – you’ve got to use the physical buttons to get around the OS. With no onscreen keyboard, I hope u rmbr how 2 write in txtspk.

The colour screen makes sense, seeing how Nokia has added a camera, but a part of me wishes this new 3310 had a grayscale display just like the original. If you’re going to reboot a 16-year old phone, you might as well do it properly.

The built-in speaker is a whole lot better than the bleeps and bloops you could create on the original 3310, but it’s not really going to do justice to your MP3 files. Everything sounds tinny and shrill, as you’d expect for such a bargain basement phone.

Few feature phones find room in the budget for a camera. Most ditch it to keep the price as low as possible, but Nokia has managed to squeeze one into the 3310.

Honestly, though? I’m not sure it was worth the effort.

Things don’t look all that bad at first glance, but zoom in and you’d swear the phone was secretly applying watercolour effects to your snaps – there’s nothing but blur and warping. The 2MP snapper struggles to capture detail even when you’re outside in perfect light, so as soon as the sun starts setting you know you’re in trouble.

Move indoors and it’s a similar story – only you don’t have to zoom in to spot the lack of detail. The LED flash doesn’t help fill in the gaps in low-light, either. Colours are muted, and anything in shadow is basically lost to the darkness.

Picture quality really isn’t very good at all, and video is even worse – but then what did you expect from a £50 phone?

It might come in handy when you’re in a pinch, and having something is better than nothing, but the flash is genuinely more useful as a torch than for illuminating low-light pics.

Hey, you wanted retro, right? Well, Nokia’s Series 30+ software is about as retro as it gets.

With no touch screen, you get around with a good old fashioned D-pad, Enter and Back keys. The main menu has a simple grid layout that lets you jump between calls, SMS messages, your address book and a few built-in apps.

It ticks all the usual boxes: calculator; alarm clock; stopwatch; countdown timer. The unit converter is a nice touch, too.

There’s an FM radio, or you can load up a microSD card and shuffle your MP3s using the music player. You can’t skip back through tracks, though, because there’s no proper queueing system. It really is basic.

There’s technically even an app store, although the Opera Mobile Store is only good for a few god-awful Java games, which were already showing their age a decade ago.

You get a web browser, too. Kind of. Opera’s WAP browser takes an absolute age to load any page, and with no built-in Wi-Fi, you’re limited to a 2G connection.

That limited connectivity also reveals a bigger problem. The 3310 is locked to the 900 and 1800 GSM signal bands, which are ancient by today’s standards here in the 4G-covered UK. Parts of Australia and Asia have started switching these bands off, and they were never used at all in North America, so if you were planning on travelling with one of these… don’t. It just won’t work.

NOT YOUR DADDY’S SNAKE

Snake on the new 3310 isn't the game you fondly remember from the original phone. It's a GameLoft-developed reimagining, with colour graphics, multiple game modes and an awkward set of controls that are far more complicated than those on Nokia's original game.

You still munch as much fruit as you can without running into your own tail, only you aren't constricted to up, down, left and right now – you can move at any angle you like.

There's a bit of retro fun to be had, but after a few games you'll be longing to crush some candies or clash some clans.

With such a bare bones operating system and no real apps to speak of, the 3310 didn’t exactly need much in the way of power. You’ll only ever be doing one thing at a time with it – usually tapping out texts or making calls, which it can handle just fine.

The web browser is painfully slow, but that’s more because of the connectivity on offer than the hardware underneath. Scrolling takes an age, and not every page renders properly, but again that’s mostly down to the low screen resolution.

It’s basic at best, but then what did you expect? You ask for retro, you get retro.

The 3310’s saving grace is battery life. Whereas your typical smartphone will last a day between charges, you can easily stretch this out to an entire week. Two weeks aren’t out of the question, as long as you don’t attempt to beat your Snake high score at every opportunity.

Are you ever really away from a mains socket for that long, though? I’d much rather bring a battery pack than give up my smartphone for one of these, even if it was just for a few days.

WHAT ELSE IS OUT THERE?

Burner phones are nothing new. There’s plenty of choice out there if you’re after a no-nonsense handset for calls and texts, and don’t want to charge it up every night. Most will set you back £20-30, but are unlikely to have fancy extras like a camera. They won’t have that same retro appeal as the 3310, either.

Stepping up to Android doesn’t have to cost a fortune, though. Vodafone’s Smart First 7 is only £15, but has a 3.5in touchscreen, 2MP camera, and runs Android Lollipop. It might not be the latest version, but it’s better than nothing.

Up the budget a little bit and you can pick up a 4in handset like ZTE’s Blade A110. Your £70 will also get you a 5MP rear camera and 8GB of built-in storage, and access to the Play Store for downloading all your apps.

When the first rumours of its resurrection started swirling, I just couldn’t understand why. Why was everyone was going mad for the 3310? After spending a week with one, I’m still none the wiser.

Feature phones never died – they’ve been stinking up supermarket shelves since 2007, when the iPhone arrived and completely shifted what people wanted from their handsets. You can pick one up for a tenner – so why should this one be any different?

If the 3310 had shown up under any other name, it would have sunk faster than the N-Gage. Sure, battery life is really good, but it’s no better than any other burner phone – even though it costs twice the price.

It’s a fine festival phone. Your gran could pick one up and not be instantly bamboozled. Stash one in a drawer or the glove box and you’re covered if your big bucks main phone takes a tumble. But that’s about it.

Nostalgia is big business right now, and fair play to Nokia for riding that wave. Look past the branding, though, and there’s nothing here you can’t get elsewhere for less cash.

Buy the Nokia 3310 here from Vodafone

Rose-tinted nostalgia can’t disguise the 3310 for what it really is – a basic burner phone that’s good for nothing but battery life.

Nothing beats a bit of retro nostalgia

Battery life for weeks, not days

Just a cheapo feature phone underneath all the branding