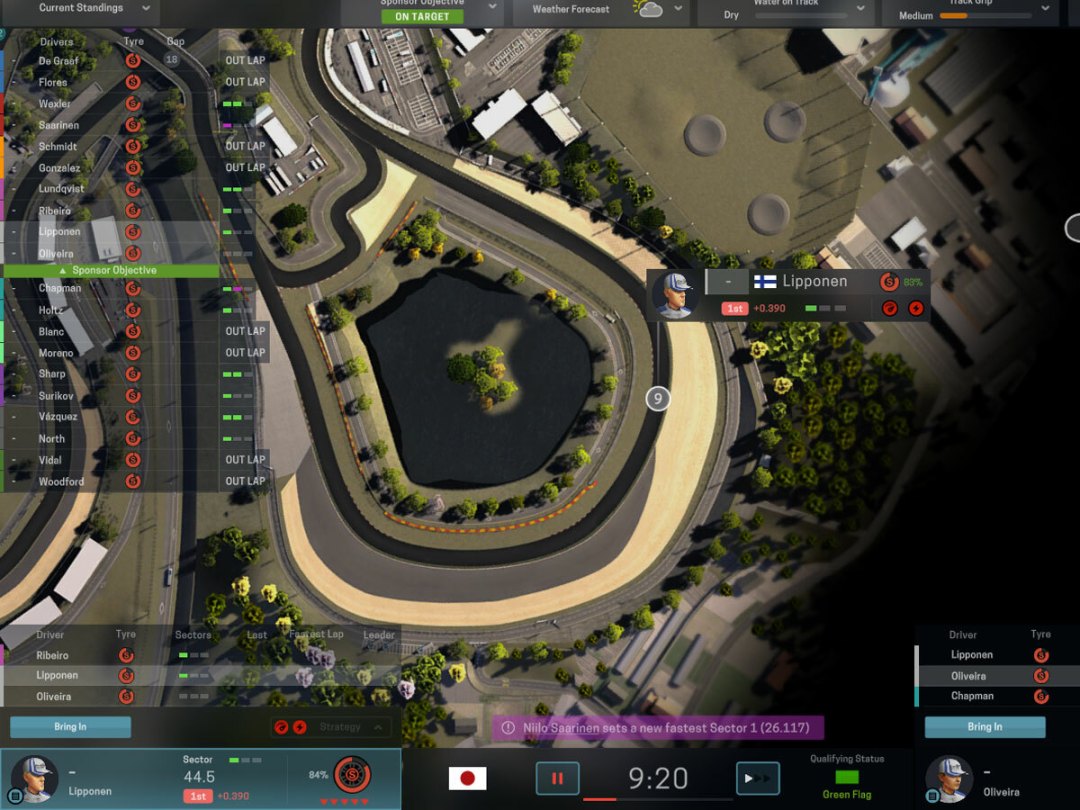 Most motorsport fans might think that they want to be a racing driver. Screaming at the TV on a Sunday afternoon, though, what they actually want is to be a team boss.

See, while the drivers get to hare around an asphalt loop for a couple of hours, it’s the bosses that make all the big – and, sometimes, bad – decisions, from race strategy to R&D to sponsorship.

If you’re a football fan, this sort of role has long been an easy thing to simulate, with a slew of Football Manager games hitting consoles over the years.

Racing fans, though, haven’t had much luck with management games since Formula One hit the ZX Spectrum in 1985 – until now, that is.

Straight off the grid, Motorsport Manager is an absolutely stunner. From menus to tracks to graphics, the interface is clean and fluid, while the race simulations themselves are wonderful to look at.

Everything here feels like it’s been fully thought out. In races, for example, the simulation is delivered as an excellent combination of TV-style coverage – with a track map and driver positions – and in-depth data, including driver status, weather forecast and the like. Yes, there’s plenty to stay on top of (this isn’t one you’ll easily play with the TV on), but it’s all layed out very naturally.

Better, still, the racing simulation itself is absolutely divine. It uses a heavy tilt-shift focus effect which won’t be to every taste, but it’s an incredibly detail-focussed interpretation of a Formula 1 race.

You can play either in top-down or isometric view, with the latter sapping quite a bit of graphics power. On an i7 MacBook Pro, we had to switch to top-down to avoid lag and jitter. If you’ve got the power to go full-scale, with crowds and full detail enabled, though, it’s definitely worth it.

That said, even in top-down Motorsport Manager feels truly immersive. Rendering is excellent, with cars zipping around naturally – without a sense of things feeling overwhelming, even with time sped up threefold.

The only shame? This is an unofficial game, so the circuits and cars themselves are similar interpretations of well known teams and locations. It’s not a major distraction, particularly as the architecture and layouts of the circuits tend to match their real-world equivalents very closely – Doha, for example, is a thinly veiled Abu Dhabi fake – but it would’ve been an excellent final touch.

Motorsport Manager review: Get your bossy boots on

Not that you’ll have much time to worry about little things like that, mind: like any good management game, Motorsport Manager makes you feel responsible for things. Lots and lots of things.

While this can get overwhelming, it’s also thoroughly realistic, with very little hand-holding, despite the accessible feel of the interface and dialogue.

It does mean, though, that you’ll need a degree of commitment to make playing Motorsport Manager worthwhile – something that isn’t helped by the relatively steep learning curve.

Sure, the game walks you through everything when you begin, but this is done all at once – and there’s a lot to take in. As in many a management game, it’s all on you to handle sponsors, driver happiness, research and development, travel, budgets and more – not to mention running the actual race weekends.

After a few in-game weeks of sheer panic, though, this is all actually more likely to pull you further into its clutches than to scare you away.

Though things can get a little repetitve – answer emails; upgrade headquarters; improve cars; repeat – there’s also a gentle but fulfilling reward curve, which works best if you start with a less established team (you can choose any of the available teams when you begin, though expectations match their reputations). Start with a small team, gradually develop, eventually win races and you’ll feel like you’ve properly mastered the game.

And master is the right word because, come race weekend, you’ve got a whole lot of things to stay on top of.

It’ll start with a practice session – which is unfortunately short – where you get to try out setups and help your drivers improve their familiarity with the car and the way it runs. There’s plenty to do here, but the timer is never on your side. Really, you only get two or three attempts to adjust downforce and suspension stiffness, send out your drivers and get their feedback before the session ends.

Then it’s on to qualifying, where you’ll pick the best setup, tweak it and sling the cars onto the track – where you’ll also be responsible for finding a gap of clear track in which your often temperamental drivers will try to set a fast time. All while you’re also watching the weather, checking parts for wear and tear and generally flying by the seat of your pants.

A lot of this detail is explained the first time you try it but, come the next weekend, it can all feel a bit unfamiliar, so much of the game – at least as you improve – is spent hurtling through proceedings with equal measures of effort and guesswork.

As you might imagine, this is only more the case during races which, again, would do well to be longer. Tire strategy is probably your biggest concern, as you instruct drivers to manage their fuel and rubber, or to push and chase the lead, before calling for pit stops – in which you can give your mechanics the risky hurry up or play it safe and slow.

In fact, almost every decision involves a sub-decision – and appropriate repercussions. It’s all very realistic and, at times, the combinations can feel so endless that you elect only to bother with certain aspects – whether that’s car setup, race strategy or hitting your sponsor objectives.

In fact, it’s this level of depth – and the way it’s balanced – that’s perhaps Motorsport Manager’s biggest negative. See, while this feels like a game with pretty graphics and arcade-like accessibility, it’s also got levels of tweakability and adjustment to rival a full-on management sim that real team bosses might benefit from using.

That said, there’s also inconsistency: while the setups and strategy decision feel truly intricate and detailed, other elements feel comparatively shallow. Emails, for example, are predictable and unoriginal, slightly detracting from an otherwise engrossing – if slow – progression through the game.

Motorsport Manager was originally a smartphone game, albeit an excellent one, and it can feel at times like this PC and Mac version is torn between retaining that mobile game feel and going full sim. In essence, it’s too hard for some, too light for others, and perfect for no-one.

On top of that, the game can feel quite repetitive, what with fielding similar enquiries, budgets and decisions after every race. What should really pull you in is the obssessive attention to detail, as you pursue the perfect setup at every circuit – but there’s rarely enough time to do this, with practice sessions and races often too short to achieve a full picture.

It’s unforgiving, too, though that’s probably a reflection of reality more than a criticism. Really, the only negatives – besides a small number of bugs – are the points at which Motorsport Manager shies away from complexity in favour of supposed accessibility. Simulators should be tricky, and there should be no apology for that.

It’s not without its flaws, then, and there are more than a few moments when you’ll find Motorsport Manager seriously frustrating. Casual players might be baffled by the complexity, while those keen to endlessly tweak will find the time constraints restrictive.

There’s no question, though, that this is a mighty fine simulator – and it’s only going to get better.

In the meantime, there’s plenty here to keep you occupied. Yes, it takes a bit of effort, but dive in and there’s every chance that Motorsport Manager will steal days of your time.

An immersive, addictive F1 management sim with a slick interface and plenty of complexity

Complete commitment to nailing the details

Plenty to tinker with

Circuits and teams are unofficial

Races could be longer