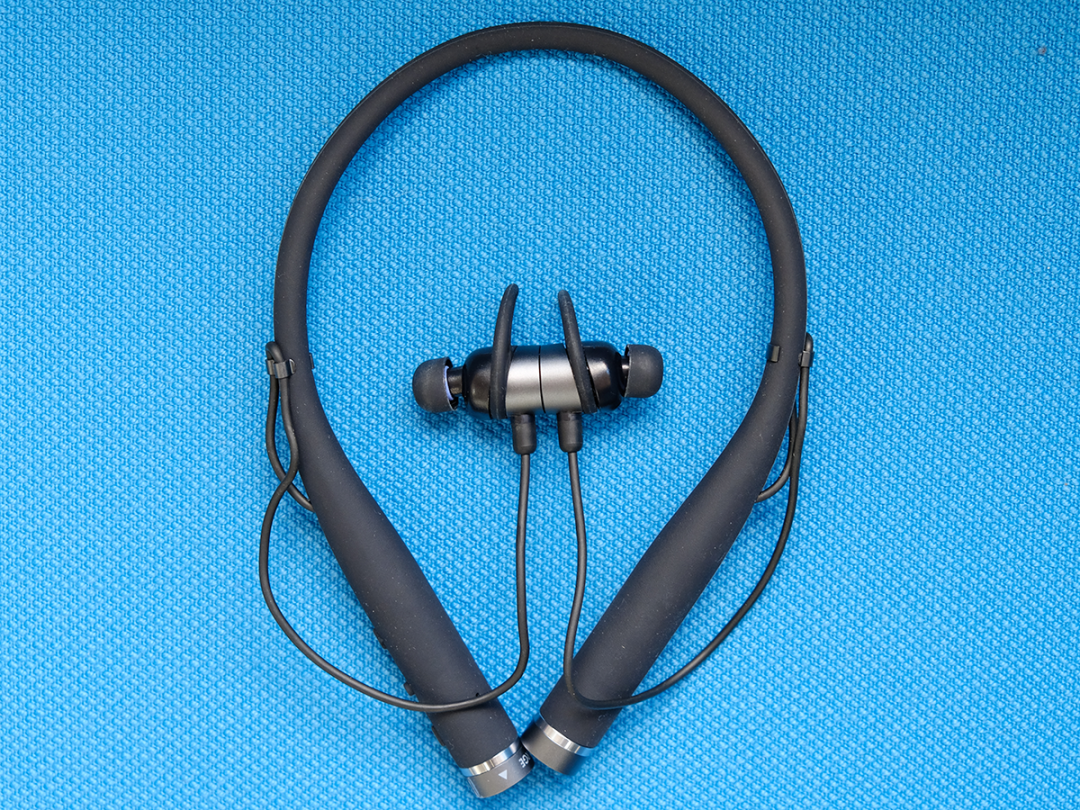 Before AI became commonplace in our homes, pop culture warned us that spending too much time with these robo butlers would likely result in one of two scenarios: we’d fall in love with them, or they’d attempt to kill us.

In reality, though, it turns out the consequences of allowing an AI into your life are even worse than we could have imagined. They can get you (shudder) exercising.

That’s right, the latest marvel in the AI family is Vi and she’s looking to replace your shouty fitness coach. By living in a pair of wireless headphones she can accompany you on jogs, collect useful data and offer advice on how to improve your running technique.

But is this budding technology truly ready to displace your human personal trainer and wrist-wrapped fitness trackers?

Design: up to your neck in it

While most AIs have set up home in plastic cylinders theses days, Vi has settled for a pair of headphones – sensible since she wants to be your running buddy.

These don’t feel like a cheap pair of headphones either; Vi clearly has a large mortgage. The buds are connected by wire to a sleek rubber neckband. Importantly, this feels comfortable resting upon your shoulders and gives your buds great support so they don’t go bouncing out of your ears mid-sprint.

Look at the neckband from a distance and you won’t even notice the controls. Both the power and volume (which can also be used to skip tracks by long-pressing) buttons are very subtle in design, being made from the same rubber as the rest of of the neckband. However, they protrude just enough to make them easy to find when you’re frantically fumbling to skip that Katy Perry track.

Charge the headphones up via the hidden microUSB port and the word “Vi” will flash up in green on the neckband. It’s small features such as this that completes the polished styling of these headphones, giving Vi a suave home that Alexa can only dream of.

Comfort and fit: a bud for all ears

I was impressed by the range of buds and wingtips included with the headphones – no matter how weirdly shaped your ear lobes are, there should be a good fit here.

I spent a good few minutes of trying on different sizes as if I were in the Primark changing rooms. When I thought I found my match I went out on a run.

By the end the buds started to become a little uncomfortable and music seemed slightly muffled. Looking back at my statistics on the app, I saw that there was a big chunk of time where I was registering a zero heart-rate. Either something had gone wrong with the headphones, or I had momentarily turned into a zombie.

Fortunately for me it turned out to be the former, but after a quick change of ear buds and wingtips I found a much better fit, which ensured that the headphones stayed securely in place no matter how fast I ran. As a result the heart-rate reader became significantly more reliable. Comfort was also improved, while audio was noticeably clearer.

So while it does take a lot of time switching and swapping buds, it really is essential if you’re to get the best experience out of Vi. And thanks to the range of options, you really shouldn’t have an issue – unless you’re Gary Lineker perhaps.

Given Vi’s aim of making your fitness tracker redundant, I only thought it fair to bring my Fitbit Ionic along for the run to give it a chance to put up a fight. Vi is packing some serious punches, though, with its sensors including a gyroscope, accelerometer, and barometer.

With such tech you get a fair few statistics of your performance including distance ran, average pace, step rate and even elevation. The ‘Personal Records’ badges on the app’s homescreen are a nice touch too, showing the figures of your best achievements such as ‘Most Calories Burnt’ and ‘Longest Distance Run’. Small things like this went a long way to motivating me to improve.

Handily, by hijacking your phone’s GPS, the app also shows the route you took on a map. It even displays the temperature and wind readings for each run, so it’s easier for you to make excuses that strong gales slowed you down last Tuesday.

Graphs are colourful and well-presented, plus it’s incredibly interesting to see your speed and heart rate mapped on a time graph together. And since heart-rate readings are more accurate when taken from your ears than your wrist, Vi instantly has an advantage over the Fitbit Ionic. Game on!

Saying that, being primarily a fitness device for running, Vi currently lacks features for alternative workouts besides the recently added treadmill and cycling modes. If you’d like to track data for a wide variety of sports and workouts, a fitness tracker is definitely the better option here.

OK, so a decent fitness band will have the upperhand on the Vi headphones in terms of variety of tracking skills, but Vi makes up for its shortcomings with its hands-on approach to your running. Having an AI chat to you during your run really does give you a unique experience.

The first thing you’ll notice about Vi is how realistic she sounds. Her voice is far more personal than the robotic voice of Alexa. The odd joke also helps to give her a personality, which in turn makes her words of encouragement that more motivational.

She’s not just a cheerleader either. Vi will occasionally tell you to pick up the pace if you’re under your target speed, engage you in an optional mindfulness exercise or even recommend a post-workout smoothie.

She can also lead a couple of training programmes such as the ‘Step to the Beat’ workout. Here, she’ll play a rhythm that you’ll need to match with your step rate. Not only does this technique help to increase your energy efficiency, but it also reduces chance of knee injuries.

If you’re a seasoned runner all of this babying could feel condescending. Vi is really only for beginner runners who need that extra push to get off the sofa. But since I fit that description perfectly, I found Vi to be hugely beneficial to improving my running stats and motivating me to run that extra mile. If you’re not a fan of how talkative she is, you can lower her level of chattiness in the Settings – but wouldn’t that defeat the point of AI headphones?

One major issue I did have with her, though, is that she’s as deaf as a 90-year-old granny. Almost every time I requested her to give me an update on my progress or read out my heart-rate reading, she’d fail to understand me.

If she can’t decipher my words at the beginning of a jog, god help her for later when I’m gasping for air like a flapping fish. The touch panel used to activate voice commands, found on the back of the right earbud, isn’t very responsive either, which made the process even more infuriating.

The app: keeping it simple

Vi’s app has one of the best interfaces I’ve ever used. It’s responsive, colourful and simple. The homescreen displays your overall stats, personal records and current heart rate, while also giving you a list of all of your previous workouts which you can dive into for bigger portion of statistics.

Other than the settings – which give you a huge array of options from unit preference to warm-up length – there isn’t much more to the app. I personally found it refreshing not to be bombarded with pages and pages of information, but stat obsessors may be left wanting a little more.

Connecting to the smartphone is an absolute doddle too. I’ve often found it a right hassle to successfully sync up a smartwatch or fitness tracker to my phone, but Vi has been working perfectly fine from day one in this regard.

If I want to start listening to music, I hit the power button and within seconds I’m enjoying my ‘90s pop punk playlist on Spotify. Bluetooth latency seems pretty solid too, as I enjoyed watching many Parks & Recreation episodes without once suffering the abhorrent sight of out-of-sync speech.

It wasn’t uncommon to experience brief audio dropouts, though, particularly when I was moving which isn’t convenient considering these were designed for runners. I’d only miss a split-second of audio each time, so it wasn’t too problematic – just rather annoying.

To my great surprise, Vi’s sound quality is pretty great. Detail is sharp, although bass is a little subdued. You’ll get a better performance from the cheaper SoundMagic E10BT, but considering you’re getting a helpful AI companion and a series of sensors with Vi, you’re still getting great value.

Thanks to Spotify integration you can play your playlists through Vi’s app. However, while listening to music via the app, volume would fail to drop whenever Vi had something to say. Strangely this was not an issue if I listened to music directly through Spotify.

Since my current jogging route currently runs along a busy road, it’s painfully obvious that Vi lacks any sort of noise isolation. That said, its absence is likely intended. Considering these headphones are made for joggers, you’re going to want to hear every car horn, bike bell and angry dog in order to avoid any nasty injuries.

One very recent update has also added AirPod-like powers to Vi. Take one bud out of your ear, and the volume will decrease by 50%. Take both out and the track will automatically pause. Sure, these skills may sound like gimmicks, but they save you precious seconds of scrambling for your phone to hit pause when a neighbour approaches for a discussion about the weather.

This feature is not flawless though. It would sometimes randomly lower the volume when I still had both buds firmly in my lugholes. But considering this feature was introduced in a very recent update, I’m sure minor bugs will soon be fixed. For the meantime, you can always turn off the feature in the app’s settings if it’s getting on your nerves.

The Vi headphones are impressive in most departments. Sound quality is decent, its sensors are accurate, six-hours of active use battery life adequate and app interface user-friendly and simple.

However, a couple of issues such as unreliable voice detection and only being beneficial to beginner runners prevent Vi from truly challenging your fitness watch. The only real advantage Vi has over your wrist ticker is the hands-on-approach of the AI, but if that’s what you’re really craving there’s no doubt that Vi can be of help.

As someone who needed that kick in the rear to get jogging, Vi made me look forwards to each run and offered a perfect blend of encouragement and advice to keep me on track.

Within the few weeks she’s been at my side, the progress I’ve made is already obvious. Any personal trainer would be proud.

Voice control is a bit rubbish

Lack of features for experienced runners