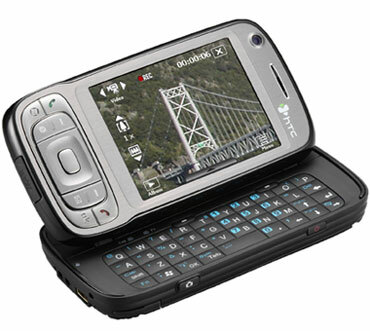 Symbian fans are currently spoilt in the hardcore business smartphones department thanks to the Nokia E90 Communicator. It features a luxury full QWERTY keyboard, speedy HSDPA speeds, a 3.2MP camera and all the PIM functionality a roving exec could wish for.

But what of the Windows Mobile OS? Well, Microsoft fanboys shouldn’t despair – smartphone specialist HTC has just unveiled a mighty challenger in the guise of the HTC TyTN II. It’s a thought too frightening for some, but this hunk of business love matches the E90 pound for pound.

The beast in thee

The TyTN II is a big step up from the original in both features and tonnage. Cosmetically, its redesign isn’t radical but its swankier lines and darker battleship grey finish make it look very prosaic.

But in order to house the new powerful feature squad it’s gained some flab and, unless you have industrial line-up pockets, the 190g TyTN II will be shunted to the briefcase.

To compete with the E90’s laptop-esque form, HTC has fitted a tilting display mechanism. Slide open the phone (the display automatically switches to landscape) and discreet integrated hinges let you angle the screen up to 45 degrees.

It’s designed to make web browsing more ergonomically pleasing via the pen-driven 2.8in touch-screen and if you have dainty digits you could even get away with touch-typing using the incredibly spacious keypad.

Full fat web surfing via Pocket Internet Explorer browser is also swift thanks to 3.6Mbps flavoured HSDPA (operators are upgrading their networks to handle these new speeds as we speak) and the Wi-Fi express. Either way the TyTN II is highly conducive for World Wide Web perusing on the hop.

As expected, this device is powered by the latest Windows Mobile 6 OS, so Salarymen are privy to the wonders of push email with attachments, Outlook Synchronisation, Word, Excel, PowerPoint document reading and editing amongst other new tweaks and small refinements.

Be warned though, email set-up is still isn’t BlackBerry-easy.

Built-in GPS is the obvious bunk-up from the TyTN, and HTC embeds a taster package from reliable and renowned sat navers TomTom. You will have to shell out for the complete Navigator 6 solution but we were particularly impressed with the sputnik fix times from a cold start. We timed it at under a minute which is outstanding.

Other advancements on the original giant is a RAM boost to 128MB – making it faster than its predecessor at firing up and running programs and apps – while the camera is now three-megapixel large, packing autofocus, white balance, self timer and a smattering of photo effects. Unfortunately, there’s no flash but the pictures are just about printable, if suffering at times from over exposure.

It’s also worth noting, if you can’t afford the TyTN II’s wallet bashing  SIM-free price, then T-Mobile has it own version, the MDA Vario III, free on selected tariffs. Both the HTC TyTN II and Nokia E90 are powerful mobile mammoths – choosing between the two will really come down to your OS allegiance and whether you have a soft spot for touch-screens.