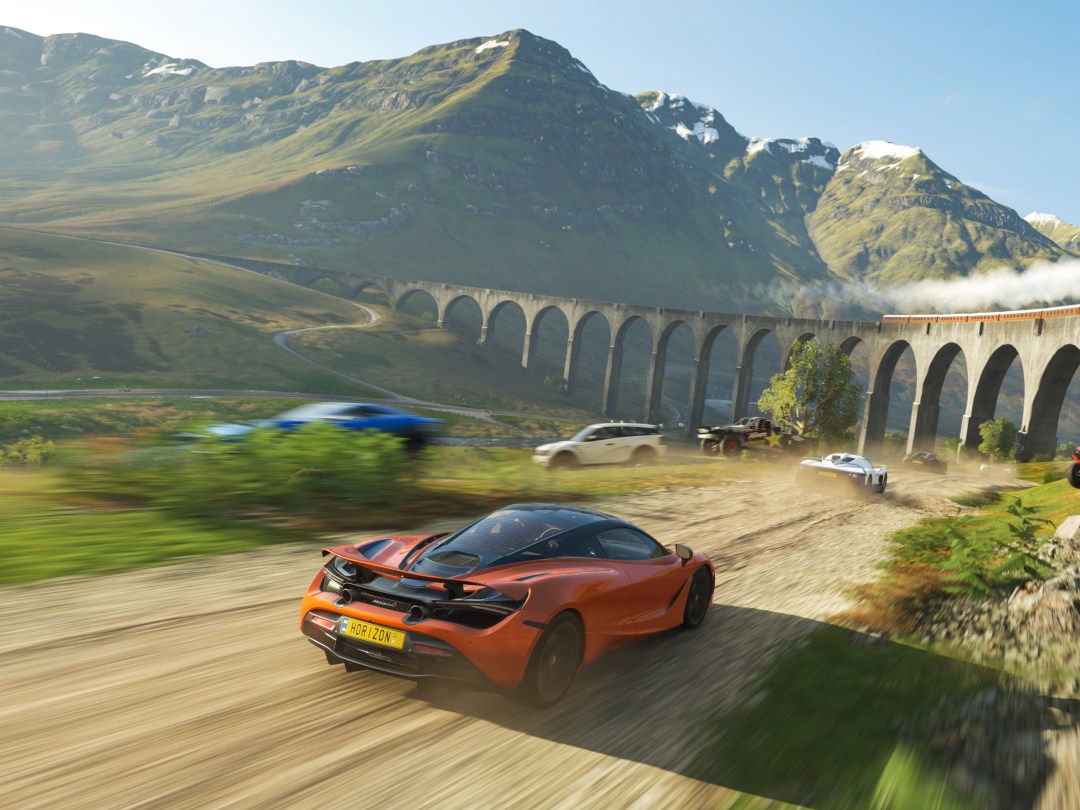 Crossing the finish line in a racing game has never felt as inconsequential as it does in Forza Horizon 4.

That’s by no means a knock against the latest entry in Playground Games’ rubber-burning series, but rather the highest compliment you can give a racing game. The simple act of driving, while soaking in some of the most gorgeous sights to ever grace any game, is so satisfying in Forza Horizon 4, the fact you’re actually competing falls to the wayside.

That’s not to say winning isn’t rewarding in Forza Horizon 4. On the contrary, leaving the competition in the dust carries its own thrills and rewards. But the blissful act of tearing up the blacktop from behind the wheel of a dream ride was enough to stretch a permanent smile across our face, even when we were dead last.

Of course, this feeling shouldn’t be foreign to long-time fans of the franchise. The arcade-y spin-off of racing simulation series Forza Motorsport, Horizon has been bringing the speed limit-breaking goods since it first hit the Xbox 360 in 2012.

Its familiarity doesn’t breed fatigue, however, as Forza’s latest lap continues to refine and evolve the series with an unapologetic focus on seat-of-the-pants fun. One of the first things the game introduces is a layout of its control scheme, a screen displaying shockingly few essential inputs beyond “steer”, “brake”, and “accelerate.”

This welcome accessibility continues when, just seconds later, you’re using these very inputs to cruise through the eye-popping English countryside at 120-plus miles per hour. In the driver’s seat of a 2018 McLaren Senna, you’re immediately trading paint with competitors, swerving around flocks of (unhittable) sheep, and inching the speedometer past 150 mph on straightaways. By the time you reach the immaculately-rendered cobbled streets of Edinburgh, you’ll feel like Vin Diesel.

The simple, spot-on controls and accessibility don’t come at the cost of depth though, as Forza Horizon 4 is absolutely brimming with options for intermediate and expert players. More seasoned speedsters will want to dive into the settings menu, where a dizzying amount of difficulty, assist, and control tweaks can be tailored to specific preferences, play-styles, and skill levels.

Similar depth can be found in the game’s customisation options, where vehicles can be tuned and tweaked to your heart’s content. Whether tinkering under the hood or applying cosmetic touches to the body of the game’s 450-plus rides, fans will find the upgrade system surpasses that of even previous entrys’ robust offerings. New features, like the ability to acquire perk-granting properties and personalize your avatar, also brings some of customisation out of the garage.

You can’t dig into all this depth right out of the gate, as Forza Horizon 4‘s various upgrade and progression paths are fueled by a number of leveling loops and currency categories – including, primarily “influence” – that’s granted for everything from streaming on Mixer to manicuring farmland with your tires. Thankfully, the game’s bursting with opportunities to earn, level, and progress, inviting players to take part in challenges, career objectives, and other myriad tire-screeching tasks across a broad range of categories and disciplines.

Whether tackling one of over two dozen career paths or simply tooling around the game’s sprawling, shared open-world, Forza Horizon 4 always feels fresh. Vehicles all handle differently – moreso if you dive into those aforementioned customization options – while the sheer amount of varied activities and objectives ensures you’re never doing the same thing for very long.

In fact, we were consistently torn between chasing the latest carrot the game was dangling before us or speeding off in the opposite direction to forge our own pedal-to-the-metal path. It doesn’t hurt that every system, mechanic, menu, and user interface element sports a level of polish to rival the sheen coming off the beautifully realized cars. Playground Games has been doing this a long time, and every last detail – from the intuitiveness of the controls to the tiniest of HUD icons – reflects that impressive lineage.

The developer’s attention to detail and quality craftsmanship is spotlighted especially well in Forza Horizon 4‘s changing seasons. The much-touted feature doesn’t disappoint, delivering so much more than spring’s rainy days, winter’s icy conditions, summer’s sun-baked blacktop, and autumn’s falling leaves. Each season ushers in a host of changes that not only bring unique cosmetic beauty and effects, but also environmental alterations that affect the terrain and how your vehicles react to it.

Toss in the game’s postcard-perfect British setting, season-specific wildlife, dynamic weather and day/night cycles, and how the calendar impacts each event in its own way, and this feature does more than provide a pretty backdrop. In short, the seasons – which change weekly – don’t feel like a gimmick, but an organic inclusion seamlessly woven into the open-world’s already-immersive fabric.

There’s nothing Forza Horizon 4 doesn’t nail and, amazingly, it can all be enjoyed solo, with friends, or with the larger racing game community. Its shared sandbox world is implemented in such a way that you can be as social, anti-social, cooperative, or competitive as you please without missing out on anything.

Like every other aspect of the game, the online element doesn’t ever feel like a “feature” that could potentially get in the way or halt the fun, but rather a seamless extension of the overall experience. All that, and it promises to indefinitely host hourly, daily, and weekly events, adding even more content to this beast of an offering.

Forza Horizon 4 is not only a bar-raising racing game, but an exceptional sandbox experience that’s set a new standard for the presentation and implementation of shared open-worlds. It’s also the prettiest game to ever be powered by an Xbox console.

Whether you’re an automobile aficionado looking for your next fix, a thrill-seeking fan of fast cars, or just someone who’s wondered what it’s like to tear a pimped-out supercar through the Lake District, Forza Horizon 4 is worth buckling-up for.

Accessible/fun for all skill levels

The inevitable sequel has lots to live up to