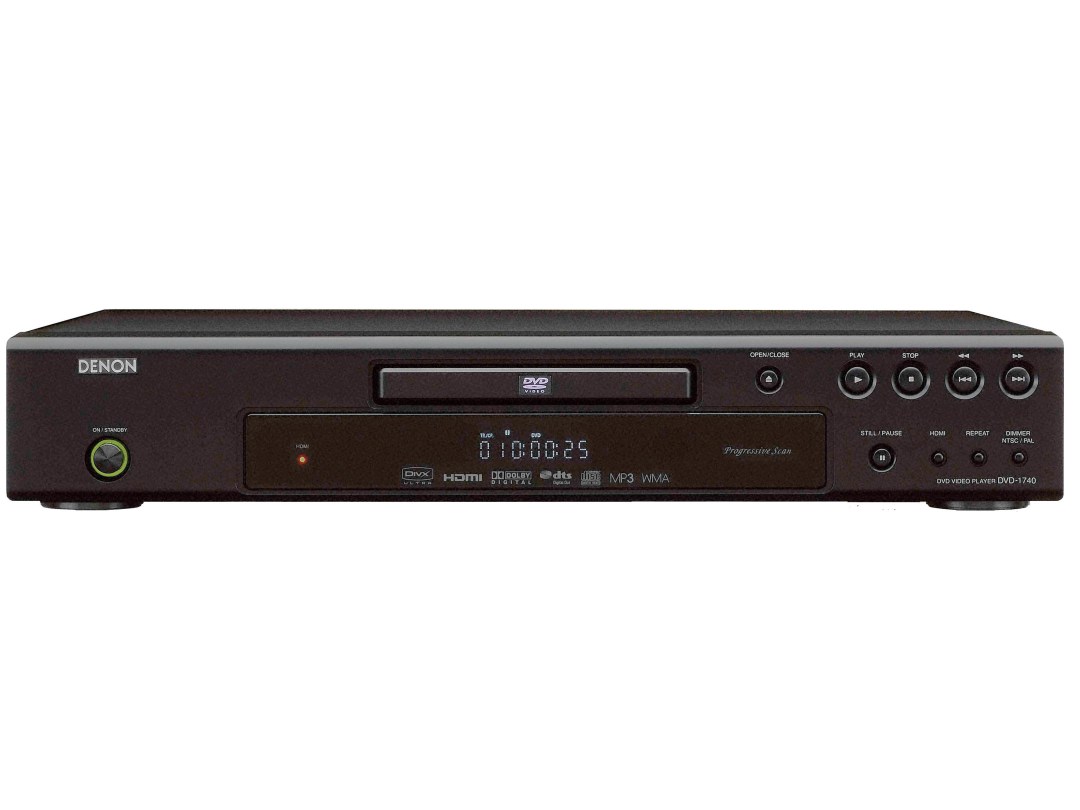 While most brands keep slashing prices to stay competitive at the budget end of the DVD marketplace, Denon prefers to keep upping the feature count on its most affordable models while keeping the price more or less the same.

This may be admirable but it also means the gap between the cheapest decks from rival brands and the £150 or so needed to buy Denon’s new DVD-1740 grows ever wider. Our main job when reviewing it, then, is simply to decide if the deck really offers enough to make its price hike worthwhile.

The DVD-1740 certainly makes a strong first impression by eschewing the current budget DVD vogue for ever smaller, slimmer and often suspect builds, in favour of a chunky, robust and reassuringly traditional shape.

Another important progression from its impressive DVD-1730 predecessor is the inclusion of upscaling to 1080p, up from 1080i.

But also out to win hearts and minds in today’s tree-hugging world is a new ‘ECO’ standby mode that manages to cut power consumption down to just 0.8W (from more than 1W on the 1730).

Otherwise the 1740 seems very similar to its predecessor. Under the bonnet, for instance, reside a 12-bit,108kHz video DAC and a Burr-Brown 24-bit,192kHz audio DAC, which are both a level above the entry level norm.

In terms of format flexibility, meanwhile, the deck can handle MP3, WMA, JPEGs and any DivX format – including v6 and VOD.

Another nice touch is the facility to adjust some basic picture parameters, such as contrast and brightness – invaluable when trying to optimise a picture to suit a particular screen type.

We must say, though, that some form of DVD-Audio, SACD or USB support would have been appreciated for £150 – especially as arch-rival Pioneer does offer such features for the same sort of money.

One other niggle is the fact that you can only adjust upscaling via a button on the main player, not via the remote. You soon forget such shortcomings, though, once you kick back and enjoy the 1740’s performance with CDs and DVDs alike.

With the latter, even with a DVD as notoriously tricky to show as Magnolia, the picture quality is simply outstanding for £150. Colours look mesmerisingly intense, noise levels are superbly minimal with or without the upscaling circuitry, black levels are deep, detailed and believable, and edges look crisp and clean with minimal jaggedness.

Our only moan about the deck’s visuals is that 1080p images can look slightly fizzy, as well as jerky during camera pans. But every other output level delivers results far better than you’ve any right to expect.

As if the video glories weren’t enough, CD playback from a wide variety of albums was universally excellent, with outstanding clarity and real dynamism.