When it comes to look and feel the 960 IS definitely our favourite IXUS in a while. It’s bulkier and weighter than normal, but in a good, reliable way, rather than a weigh-your-troos down fashion.

And it’s no surprise that the 960 IS is bigger than many compacts when you look at the features Canon has crammed inside the titanium casework.

For starters, the 960 IS is one of a new breed of 12MP compacts, joining the FujiFilm F50fd and Nikon P5100 in a rather select club offering the kind of resolution that, in terms of numbers, matches the current crop of entry-level SLRs.

After that bombshell the other features seem conservative. Okay, so the lens is a 3.7x zoom –the 35mm equivalent of 36-133mm – but the 2.5in LCD, image stabiliser and Face Detection technology are pretty standard nowadays.

This isn’t a problem, though, because it’s the application of these headline-grabbing technologies that matter, and under the bonnet the 960 IS has some interesting stuff going on, including the DIGIC III processing engine found in Canon’s latest line up of SLR cameras. It also has an optical viewfinder, which is a true rarity in the compact market nowadays.

In use the 960 IS is pure Canon, with an easy to use menu system supported by a sensible collection of controls. It also offers something for most levels of camera users, from the full manual options for serious snappers right across to the comprehensive 18 scene modes for beginners to get the best shot for their situation.

All these work well, as does the face detection offering, ably picking out friends in even a darkened room – which is where we normally meet our friends.

The anti-shake mechanism from which the 960 gets its IS suffix is also excellent. It doesn’t really draw attention to itself, but allows you to shoot at slower speeds and in lower light without resorting either to the flash or to upping the ISO towards the 1600 maximum.

Image quality is where this camera really comes into its own though, with sharp and clear images chock full of vivid, natural colours. It doesn’t quite stay free of the increased noise that’s usually the price compacts pay for higher resolution, but at lower ISO settings this really shouldn’t be a problem. The 960 IS also allows you to be more creative than most compacts – not with quirky colour modes, but with its response to different types of shooting conditions.

So while this flagship IXUS may seem expensive, it’s going to be near the top of the feature tree for a while, and in terms of image quality is worth every penny. 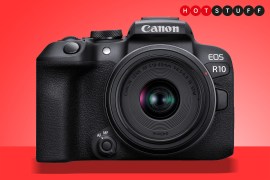