The new iPad is now just plain old ‘iPad’. But in contrast to the revolutionary original, this latest Apple tablet looks like a regression – half-way between its two Air-branded predecessors.

It might be easy to give this latest iteration a cursory glance and conclude it doesn’t do anything new, but take one look at the price and you’ll change your tune. 340 quid for this iPad suggests that Apple is shooting for the masses.

Spend a few days using one alongside either iPad Air incarnation, and it’s entirely appropriate to wheel out two overused cliches: ‘beauty is only skin deep’, and there’s ‘power under the hood’.

From a design standpoint, though, this iPad offers no real surprises, bar Apple’s obsession with thinness apparently coming to a screeching, juddering halt. If you’d been expecting the new iPad to be so thin it might give you a nasty paper cut, prepare for disappointment.

It’s 1.4mm thicker than the Air 2 and about 30g heavier, too. In other words, just like the original iPad Air. And honestly? Good. I’ve long been sick of devices getting thinner over and above practical considerations. This apparent compromise seems like the right choice.

The tiny extra heft to this iPad doesn’t make it feel worse in use. If you can tell the difference when one tablet is the equivalent of a packet of crisps heavier than another, congratulations – you never need buy weighing scales again.

The extra thickness does feel very slightly worse in the hand if you’re holding an iPad Air 2 or iPad Pro at the same time, but if you’re doing that regularly, it might be time to seek help. It’s a smart trade-off for a flush camera and bigger battery.

Said battery does – marginally – outperform the iPad Air 2’s, whether you’re looping videos like a tech writer for Stuff, or doing sensible things like playing games and faffing about on Facebook.

A bigger concern with this latest iPad is the display.

In many ways, it’s excellent. As anyone who’s used a Retina iPad before will attest, Apple does screens well. The 9.7in display used here is almost eye-searingly bright at maximum settings – more so than any iPad but the Pro. It’s clear, and with an identical resolution to previous iPads. In other words, content is pin-sharp, unless your nose is wedged against the glass.

But presumably in an attempt to save costs, the new iPad’s LCD panel isn’t fused to the glass, and it lacks an anti-reflective coating. The first of those things supposedly results in lower contrast and less vibrant colours. But there’s little appreciable difference when using it alongside an iPad Air 2. You do get a noticeably hollow ‘thunk’ when tapping the display, though, and the newer iPad is much more of a fingerprint magnet than its predecessor.

The anti-reflective coating is the bigger problem, reverting the tablet to being a mirror as soon as there’s even a hint of bright light nearby. To be fair, it’s not like the iPad Air 2 was perfect in this regard – no tablet that’s essentially a slab of glass can be – but this feels like a cost-saving too far, and I found this hard to get past when switching over from the older model.

Fortunately, things step up significantly when you hurl apps and games at the new iPad.

In pure benchmarking terms, this new tablet meaningfully outperforms the iPad Air, at worst edges ahead of the iPad Air 2, and is no slouch compared even with the iPad Pro. Real-world testing has more subjectivity, but this was the area in which my disappointment with the display started to fade. So much for it being a ‘budget’ iPad.

Feeding my Korg Gadget addiction, I fired up the app, and created a loop with several iterations of the notoriously processor-hungry Lexington gadget. The iPad didn’t bat an eyelid. On duly flinging the track across to an iPad Air 2, the older tablet choked horribly until some tracks were frozen.

This pattern continued elsewhere. Games would at worst play identically to on the iPad Air 2, or sometimes a touch more smoothly. In Split View, there were no wobbles. The combination of the A9 first seen in the iPhone 6s and 2GB of RAM seems perfectly suited to current App Store goodies. And it also bodes well for Apple’s future plans – this isn’t another iPad 3-style compromise.

Elsewhere, the iPad essentially offers the same ports, connectivity and camera as found in the iPad Air 2. This means Apple’s ‘courage’ regarding headphones has yet to make its way to tablets, so you can plug in your best cans for a richer audio experience than the stereo speakers alone can offer.

You get Touch ID, which was missing on the original Air. There’s an optional cellular model, of course. And then there’s the usual Lightning port for charging which, as ever, takes hours.

It’s in this general area that the new iPad and iPad Pro are most clearly differentiated. This cheaper iPad has no smart connector, only two speakers, and doesn’t support Apple Pencil. Frankly, that seems fair enough, given the target market, and it’s not like you can’t find alternate keyboard cases and styluses knocking around anyway.

The cameras are fine for animation apps, FaceTime and shooting 30fps HD video, but you probably don’t want to be using the rear one for a great deal of photography if you’ve got a smartphone on you.

As noted earlier, the price is a major shift for this particular iPad. Despite the massive kicking Sterling’s received since last summer, the new iPad still clocks in at 40 quid cheaper than the iPad Air 2, and is over £200 less than the iPad Pro.

Apple’s still playing upsell games in urging you to part with an extra 90 quid for four times the storage (and if you can afford that, you absolutely should), but this new base level feels like the first time the iPad’s properly come off of its lofty perch and aggressively courted the mainstream.

Sure, there are cheaper Android tablets out there, but it’s hard to find any properly comparable ones at this price-point – and that’s even more the case once you factor in the significantly richer app and game ecosystem that the iPad enjoys.

The lack of an anti-reflective display coating is a great pity and perhaps a compromise too far, and the hollow thunk on tapping the screen knocks the iPad’s typically premium feel; but elsewhere, this iPad performs admirably, and as such seems well placed to tempt anyone with an iPad Air or earlier to upgrade.

Frankly, if this model won’t get iPad sales moving again, it’s hard to know what will – beyond a radical rethink in terms of iOS for iPad and the very nature of the device itself.

Read what you like into Apple’s branding, but with this latest iPad being short of any modifier (Air! Mini! Pro! Just Buy It Already!), it feels like Apple’s saying this is the iPad for almost everyone.

If you want something smaller, buy a mini, and if you need a Pencil, grab a Pro, otherwise just get this iPad.

Is it the best iPad? No. That accolade still rightly belongs to the Pro. And occasionally (again: that reflective screen), Apple should perhaps have reconsidered some of its cost-cutting decisions. On the whole, though, it’s hard to grumble at the new iPad’s marriage of form factor, power, app ecosystem, and price.

If you’ve an iPad Air or earlier, this is a strong upgrade; if you’re new to tablets, you won’t find anything better for the price.

It might look like a regression, but this iPad is affordable and has enough power within to serve you well for years.

Powerful and snappy in varied use cases

Price is ideal for newcomers and upgraders

Speakers still not up to much 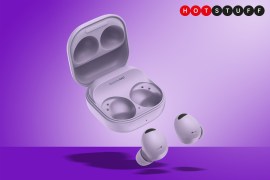