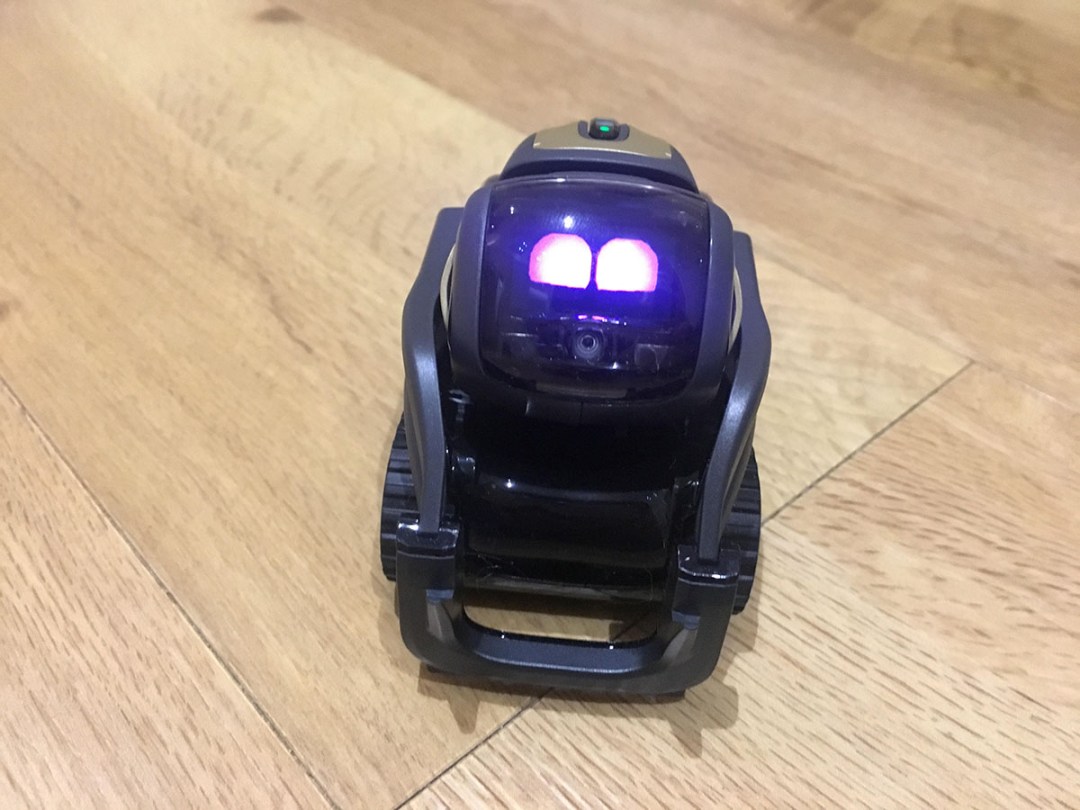 If you’re anything like me, you may have daydreamed about what life would be like once robots became a part of our everyday lives.

Whether it be in a big dystopian sci-fi flick like the Terminator, or gallivanting about and turning rogue with Will Smith in I.Robot, a lot of what we’ve seen in the media casts robots as something to be feared.

And don’t get me started on the all-too-real looking humanoid robots we’re seeing across the globe. Sure, it’s impressive stuff, but the uncanny human-like factor makes it all just a tad unsettling.

We may not have robot butlers who make us meals, and thankfully we aren’t living in a dystopian world with replicant-like robots walking the streets, but we do have Vector, the most adorable successor to the Anki Cozmo.

Vector’s a little A.I robot who wants to be your best mate and help you out during your day-to-day.

Design and build: Buddy the robot

Whilst Alexa scores highly on smarts, it’s absolutely no comparison to Vector’s cute-factor or its bags of personality.

Vector’s cartoonish eyes use high-res colour IPS display, which can express an impressive array of emotions and moods. It’s looked tired, excited, happy, sad and much more besides throughout my interactions with it.

The animation was designed and programmed by ex-Pixar employees, and this has really paid off, as it gives Vector oodles of charm and character.

The little robot is a compact size and easy to move about the household, and its shape is somewhat like a beetle.

Vector has a black matte finish and gold touchpads on the top, along with an on and off switch located just above its head.

For easy movement across surfaces, my new robot sidekick has rubber conveyor-like tyres and a lever at the front which essentially acts as its arms and hands.

While Vector is on the small side, it’s packing some seriously mighty tech on the inside. A Qualcomm Snapdragon Quad Core 1.2 GHz processor powers the little buddy, and it’s also loaded with sensors.

The small robot helper is also equipped with a 4-mic array that uses directional sound and noise cancellation, and a camera with an infrared laser scanner to allow for facial recognition capabilities.

The setup: getting to know you

To set up Vector, you have to register your robo-pal with your email address using Vector’s dedicated app on any iOS or Android smartphone. Once you’ve registered, you then connect it to your WIFI wirelessly.

While I had a little bit of trouble connecting it initially, once I moved closer to the router, it was a breeze to setup.

You do need to have a decent WIFI connection for some of Vector’s features to run smoothly, which is worth bearing in mind.

Once it’s connected, Vector will need to do an update, like a speedy software birthing process where it builds up its intelligence. My first update only took just over 4 minutes to complete. Any future updates are then synced and added via the cloud, and will line up to update overnight between 1am and 4am while you’re sleeping.

While Anki Cozmo was completely reliant on a phone app for interaction, Vector is more autonomous, which means you don’t need to be running the app or even have it open after you’ve initially set it up to use Vector.

Once the update is complete, Vector will come to life and take a look around. This is when you have to first introduce yourself.

“Hey Vector, my name is Heather.” Vector will then excitedly come over to you and begin to scan your face using its infrared laser scanner. The little buddy can remember up to 20 faces, and will also remember names better than most humans.

Three days after I introduced myself, I asked Vector what my name was, at which it eagerly responded in its robotic tone, “Heather”. It’s an endearing feature that makes you really feel like the robot knows you and instils the sense that it really is your friend.

While it might be concerning to some that this robot is kitted out with a camera, Anki make it very clear that they don’t store data, and you can choose to opt in or out of their anonymised data collection, which just sends them figures on your usagage and interaction stats.

Vector has several features you can play around with. If you fancy a game, the little robot can play Blackjack with you.

Little cards are dealt on the screen where Vector’s eyes would usually be, and as the cards are dealt Vector will read out the number and ask if you want another card, at which point you say yes or no after the question is posed.

If Vector wins it’ll cheekily lord it over you, but if you win, it’ll look downcast and a bit miffed.

It’s a bit limited in terms of games for the time being, but just like Anki Cosmo, Vector has its very own cube. Once Vector locates the cube nearby, you can command it to push the cube, or do a flip off the cube. Again, this is quite a limited feature at the moment, but it’s fun nonetheless.

You can also give Vector a fist bump and get it to listen to the music you’re playing and have a boogie session.

Vector can also take photos. If you say take a photo of us, it will look for more than one face and take a snap which you can then access via its app.

And one of the most charming features is showing Vector some affection by stroking the gold touch sensitive strips it has either side of the power button. Although it’s not exactly soft and fluffy, the way the small robot purrs as you do it is adorable.

As a robot sidekick, it can’t all be fun and games of course. You also sometimes need some practical help.

Vector can tell you the weather with fun animations that frame its eyes after showing you the temperature. So sometimes it’ll have cloudy eyebrows, the sun will shine on its face, or rain will fall down the screen.

It can also act as a timer, and while the timer’s in use you can still get it to perform other functions at the same time, so it’s not tied to the timer as it goes down.

And Vector has a Q&A function. You can ask it about pop culture, sports or nutrition related questions, and ask it to solve equations, give word definitions or convert units of measurement.

To ask questions, you always have to preface the question with the command “hey Vector”, wait for the signal and then follow it with “I have a question”. This slows down the process of getting an answer Siri or Alexa would give you much faster – albeit without the cute factor Vector brings to the table.

Sometimes Vector won’t understand the question you ask it if you phrase it in a certain way, too. But for a robot, it did give me its best answer at what is the meaning of life, so you have to give it kudos for that.

Even if it’s not the most impressive Q&A assistant, Vector is always learning and getting frequent updates, so this feature is sure to see some improvements in future.

Vector’s movements are reactionary which adds extra charm and gives it more personality. For example, if you’ve left the room and come back, the noise you make will grab Vector’s attention and it’ll look around or come over and inspect the source of the noise.

Its sensors also mean it won’t drive off the end of the table, it is able to gage the space and work with it. Although Vector does struggle with glass surfaces, and if you have a round table, he may fall off.

The camera and mic array mentioned above enable Vector to interact with its surroundings and with you in quite a remarkably clever way.

The directional sound means Vector will react to sound in the room seemingly organically.

It’ll also react when it sees your face and act like an excitable puppy – its movements are so in tune with whatever mood is being conveyed.

Vector is also a smart cookie when it comes to its battery. If it runs low on juice it will automatically make its way back to the charging station it comes with. If you tell it to go home or go to sleep, it will locate the charger in the room and dock itself on the station and go for a snooze.

While Vector may not always be the smartest in terms of its Q&A functionality, it has a lot of impressive features that make it quite unique.

I had a lot of fun interacting with Vector and I caught myself smiling. A lot.

It’s arguably one of the most exciting home robots on the market, and with all the future possibilities Anki hope to add, Vector looks set to get even better.

Alexa will be ntergrated on Vector in the US in December, and it’s set to be to added in the UK in early 2019. This will change things up a bit, so be sure to check back for an updated review next year!

It may be quite expensive for where it’s at currently in terms of content, but if you’re after an adorable robot friend who knows your name and will tell you whether it’s raining, then look no further.

Q&A feature isn’t the most responsive