Toshiba has announced two laptops at opposite ends of the tech spectrum at CES.

First up we have the Toshiba Kira – a high-end slim Ultrabook which packs in a pixel-packed 13.3in 2560×1440 touchscreen display covered in Corning’s scratch and shatter resistant Concore glass.

Despite its svelte magnesium alloy profile, it manages to pack in a fourth generation Intel i7 Haswell processor, and although hardcore gaming is off the cards due to the lack of a dedicated graphics card, Intel’s integrated HD4400 graphics can churn out 4K movies without a problem.

Three USB 3.0 ports, a HDMI out and SD card reader make up the connections while Harman Kardon speakers should provide some beefy sounds.

A 256GB SSD and 8GB of RAM, coupled with a nine hour battery life and a 1.35kg weight round off the spec sheet.

It’ll be available in February for around £1300.

Toshiba’s first ever Chromebook will be a lot easier on your wallet, thanks to its £250 price tag.

16GB of internal storage is bolstered by 100GB of free Google Drive storage, and its battery can pump out up to nine hours in the office. It’s got a HDMI port, two USB 3.0 ports and an SD card slot to boot, and it can be yours in February for £250. 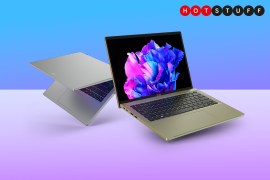