If there’s one thing we learnt from the robot segment of LG’s CES keynote, it’s that the robot uprising is imminent. And we’re fine with that.

I mean look at how unthreatening they appear to be, in all their curvy forms – there’s absolutely nothing to fear. No, from an airport cleaning assistant to a central home butler, they’re merely here to help render us humans incapable of doing even the simplest tasks in futur…oh, we get it now.

The Hub Robot is like J.A.R.V.I.S, but cuter. Designed to connect the different elements of your smart home, it includes Amazon’s Alexa voice recognition tech inside it, meaning it can carry out the most mundane of tasks such as turning on the heating or starting the washing machine. When it’s not making eyes at you, the Hub Robot’s face will transform into an interactive display on which you can view your fridge’s contents, get weather and traffic updates, and see reminders.

It’s also aware of everyone’s movements and is capable of recognising individuals in your family, meaning it can greet everyone uniquely. To make that less creepy, the Hub Robot can express emotions with its giant blue blinkers and also swivel and ‘nod’ its head. Oh, and it comes with its own army of mini-mes, designed to be placed around the house as assistants to your robot assistant.

Hate mowing the lawn? Then you are a sane individual. But the good news is, there’s now a robot for that, working pretty similarly to how LG’s own robo-vaccuum – the Hom-Bot – cleans your place. It’s going to prevent your gardens from getting unruly without you having to get physical.

The Lawn Mowing Robot is smart enough to know where it is at all times and recognise obstacles so you’ll never find it whirring uselessly, stuck in a hedge. Overgrown grass has absolutely no chance against its single spinning blade of doom.

What we don’t know, though, is how your house pets are going to react to this. Maybe best to keep them locked inside while it’s doing its thing.

LG’s robots aren’t just for the home, they’re out in public spaces too. In fact these mechanical guides will soon be scooting around your nearest airport.

What will they do? Well, you’ll be able to accost any of them for help should you need more information about your flight – simply slide your ticket into its neck-slot and it’ll rattle off the boarding gate, departure time and distance from current location. All it’s lacking is an actual finger to point you in the right direction. But let’s face it, that might be a bit freaky anyway.

Want to see one in action? Seoul’s Incheon airport is where you’ll want to head to.

Airports are clearly high on LG’s list of ‘Things that need making better via the addition of robots’, because this cleaning ‘bot is also designed to work in those strangely unsettling places where planes live.

Think of this as an industrial-sized Hom-Bot. It’s designed to clean across different types of surfaces such as carpets and tiles to leave the floor spotless enough that any transitioning flier could lay their weary head there.

Fortunately, the Airport Cleaning Robot is thoughtful enough to not get in your way; it’s as ninja-esque as possible thanks to light sensors, bumpers, and mapping capabilities. It’ll certainly be interesting to watch how it dodges the crowds during holiday airport traffic. We could use a tip or two.

Save time, save money and get incredible results with these high-tech helpers 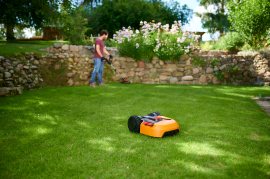 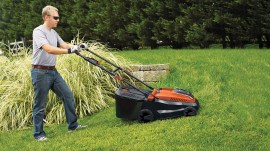 If you don’t love to mow, you’ll love this selection of the best robot mowers to buy today 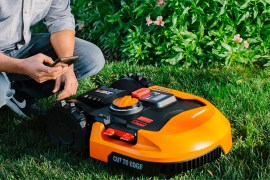