In recent weeks, rumours about the future of Lenovo’s Moto X line have ramped up, and the consensus is that it’ll have a new name – Moto Z – and bring along a wave of optional add-on upgrades.

Like the LG G5, you’ll be able to snap on additional hardware modules to expand the phone’s core functionality – only these larger modules take up the whole back side of each Moto Z model. Thanks to serial leaker Evan Blass (@evleaks), here’s our first look at the MotoMods.

The one in full view obviously turns your Moto Z into the spitting image of a classic point-and-shoot camera, complete with the center-mounted lens (purportedly with optical zoom capabilities), a flash, and a physical shutter button. It’s not as clear what the other modules here offer, although we’ve heard that Lenovo will offer a larger battery pack, stereo speakers, and a pico projector as options.

Lenovo is expected to reveal both a high-end Moto Z Style and a mid-range Moto Z Play, the former featuring a 5.5in QHD display and Snapdragon 820 processor while the latter trims down the specs with a 5.5in 1080p screen and Snapdragon 625 chi[. However, the Play is said to have a bulkier 3,500mAh battery, while the Style hosts a more modest 2,600mAh pack.

The MotoMods should work interchangeably between devices, eliminating any compatibility issues between device types, plus they should work with the expected Droid variants of each phone coming to U.S. carrier Verizon. Blass also shared the above image, which appears to show the back of one of the Droid versions in three colour options.

A Moto reveal is planned for 9 June at Lenovo Tech World, where we ought to see both Moto Z models and a host of different modules for them. Unless you really think Lenovo is about to release an upgraded RAZR flip phone, in which case… good luck with that.

This might be the best Moto Mod ever, but it’s coming after the phone 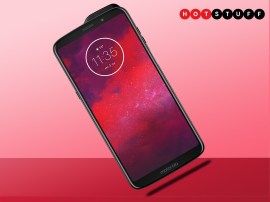