LIDAR – it shouldn’t work in the dark, right? After all, the clue’s in the name: Light Detection And Ranging.

Turns out that’s not entirely true. Ford just proved as much with its fleet of self-driving Fusion cars. They can now navigate the Arizona desert in pitch black conditions – hardly something you’d want to attempt yourself.

Lidar normally works by flashing lights and mapping the reflections in real time within the car to create a path, highlighting any obstacles on the road. Ford’s doing it without any visible light, proving its sensors are up to the job of keeping you safe on the roads.

The military has been doing this for a while, but it’s now filtering down to Joe Public.

Similar sensors were used in early self-driving prototypes from Tesla and Audi, but it turned out rain was disrupting the lenses – rendering them relatively useless.

Ford’s already proved it can handle a spot of snow at its winter testing ground in Detroit, and this latest test shows it doesn’t actually need daylight to keep on the straight and narrow.

Hopefully that should mean driverless cars will be on the roads sooner than later. It’s been enough for the company to triple its self-driving fleet, which are edging ever closer to a proper release.

How much you’ll have to pay to give up driving duties is still a mystery, though.

We’re still waiting for a midnight run around the M25 in the middle of an April shower – if one of the autonomous Fusions gets through that unscathed we’ll happily pass on all our city driving to Ford’s clever cars.

Tesla Autopilot vs Full Self-Driving: what’s the difference between the self-driving modes?

Is the future of Tesla’s self-driving all it’s cracked up to be? 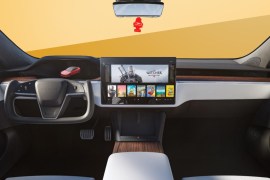