BBC Radio 4’s Today programme has announced the winner of its design-a-radio competition – and we have to say it’s rather snazzy.

Listeners were asked to design the outer skin of a DAB Radio that captured the essence of traditional radio but also felt contemporary – no easy task. The winning concept would then be brought to life by Tivoli Audio and put on shelves for a limited period later this year.

Well, the verdict is in – the winning design comes from Cardiff-based Today listener David Hampson. His design draws inspiration from the architecture of Broadcasting House – both the original 1930s Art Deco design and the curved glass that characterises its recent renovation.

Hampson’s design will be available in late Autumn, priced £50, with profits going to BBC Children in Need. A video showing some of the other competing designs, including the rather entertaining Pillow Radio, can be viewed here.

The evolution of motion control 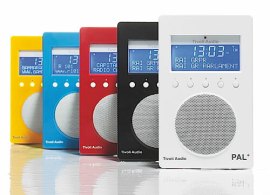