The words ‘iconic iPod dock’ immediately conjure up images of B&W’s Zeppelin, which joined the AirPlay party at the beginning of the year. Altec Lansing now hopes to take the title as king of the iSpeakers and judging by the recently unveiled inAir 5000, they’re going to do just that.

Its smooth curves and minimalist black and matte-metal colour scheme ooze class, but this AirPlay compatible beast promises more up its sleeve than just a pretty face – the shape is designed to radiate sound out at a multitude of angles to ensure that no sound waves are cancelled out by any pesky obstacles, including the speakers themselves.

Under the skin, the inAir 5000 packs in three separate amps, ensuring that the highs, the lows and everything in between are more than adequately covered. A USB port at the back doubles up as a charger/audio input for your iDevice of choice, which is an added bonus for those AirPlay-free moments when your battery is about to die.

Available from early October (for no small price, we imagine), the company that designed the sound system at Abbey Road Studios and Woodstock, as well as the first iPod dock for Apple, looks set to add an impressive new addition to its list. 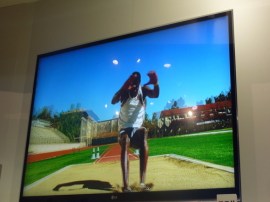