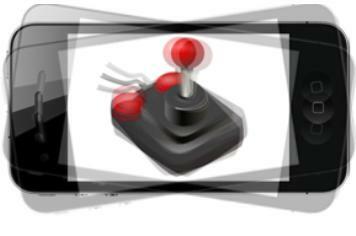 Simple. Genius. Brilliant. That’s all that really needs to be said about FixPix, a game that requires you to tilt your phone to arrange a skewed 3D world into its proper shape. Sounds less than enthralling, but give it a try and you won’t be disappointed. Innovative and costs less than your soggy lunchtime sandwich.

Ever dreamed of piloting a Wi-Fi-controlled hover-drone? Well naturally, there’s an app for that and this is it. This offering from Parrot enables you to pilot the Parrot AR Drone via Wi-Fi using the iPhone’s accelerometer. A future update will also let you battle other drones with virtual lasers blasting on your screen. Sadly, you need to splash out £300 on the AR Drone first.

Take the classic marble labyrinth game. Now throw in some monkeys, bananas, crazy mini games and every colour known to man and you have the insanity that is Super Monkey Ball. Hopelessly addictive and mind-meltingly frustrating, you will find yourself replaying levels over and over again just to finally see your monkey leap around in triumph.

More hectic and fast paced than a bunch of sugar-fuelled kids given electric scooters on Christmas day, Prism 3D requires you to navigate a bouncing ball through a 3D maze of coloured blocks at break-neck speeds. Random power-up blocks necessitate fast thinking and the visuals are smooth and slick.

You are the all-powerful Finger Deity and your aim is to guide the delightful little “Rolandos” through perilous terrain to their safety via a combination of tilting and tapping. Although simple, the gameplay is absorbing.

If your mind hasn’t been destroyed by videogames and reality TV, you may very well remember that Labyrinth was one of the first and best games for the original iPhone. Now Android users can get in on the throw-your-phone-against-the-wall-in-frustration fun with this classic puzzle game. Tilt your phone to navigate a ball around various holes and obstacles without letting it fall.

“BE WARNED: Insanely Addictive!” That’s the disclaimer developers Lima Sky have added to Doodle Jump – and after staying up till 2am playing it, we’re going to have to agree with them! Tilt your phone to guide the “Doodler” up and up and up, with the aid of various power-ups. The crack factor kicks in when you visibly shoot past other people’s score levels, laughing maniacally at your superiority.

It’s like the creators of Wipeout, Mario Kart and SpongeBob Squarepants were locked in a room with a ton of LSD. Tilt controls put you in the driving seat of a snail on steroids whose job is to collect packages dotted around insane tracks full of mental twists, turns, jumps and loops. Various undesirable characters dotted around the track try to hinder you, but naturally the snail has a cannon attached to its back to deal with such pesky situations. Naturally.

A classic driving game with sexy-sleek graphics and awesome motion controls. It boasts one of the most immersive experiences available on any mobile game by providing a realistic first-person cockpit view, enhanced by holding your iPad out at steering wheel length and turning it to steer. The only drawback is the strange looks you’ll receive on the train when you’re driving an invisible car.

Ah, Snake, we will never forget the countless hours of finger-bleeding joy you provided in the infancy of the millennium. However, it’s 2010 now and we’re afraid we’ve moved on to more sophisticated methods of control; one that saves our thumbs from being temporarily crippled. Best of all, this motion-controlled classic is totally free.

Tilt all of the red balls off the screen while saving the green ones. Sounds easy? Well initially, yes, yes it is, but in a game where the difficulty ramps up from easy to nearly impossible you’ll soon be swamped with the FAIL screen more times than you’ll ever care to admit. Graviturn demands quick-thinking, subtlety and sheer luck in the latter stages, but the sense of achievement is totally worth the effort.

The humble cube can play many roles, from seasoning soup to giving life to the entire race of Transformers. The cubes in Cube Runner fall neatly in the middle of these two extremes in terms of excitement. All you have to do is fly through a random assortment of them and try not to crash. Harder to put down than glue-covered bubblegum.

A gorgeous accelerometer-driven game with crisp, simple visuals and bold colours that sees you hurtling through all 360º of an obstacle-littered tunnel. Put your neurons to the test and see if they can fire off fast enough to keep up with the blurry mayhem. Crash, rinse and repeat until you’re satisfied with the all-important high score.

Yet another mind-bogglingly strange creation to hit our shores from Japan. You control a massive sticky ball that literally collects anything unfortunate enough to cross its path. Eventually you’ll end up with a huge cluster containing flowers, tables, chairs, boats, cats and cows and much more.

Android’s version of Doodle Jump, except you control a cow who must do its best to save the rest of its herd from the UFO that cruelly abducted them. On your ascent to the heavens you may encounter some of your brethren hurtling towards their doom (but not before kindly offering you bonus points) as well as other desirable and undesirable collectables. A great time killer at an irresistible price.

– 10 best Android apps of all time