Last year’s Bravia A1E was easily one of the best-looking TVs you could spend your hard-earned cash on – even if it did have a funky flip-out stand that not everyone was a fan of. Sony’s reigned it in a bit this year, turning its attention to image quality and HDR instead. The A8F gets Dolby Vision support, Google Assistant voice commands built-in, and an improved picture processing tech that could make it the best-looking OLED TV you’ll see all year. Oh, and it has a subtle stand that isn’t quite as bonkers as last year’s A1E. Sony’s acoustic surface sound tech still turns the whole screen into one giant speaker, though. There’s no word on price just yet, or when you’ll actually be able to buy one – hopefully it’ll arrive in time for the World Cup this Summer. 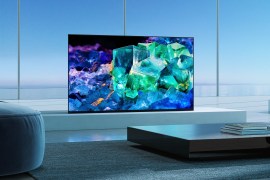