Until 120Hz mobile displays came along, the smoothest thing known to the human race was Tom Jones. Like 120Hz screens, the Welsh crooner doesn’t normally come cheap (just ask him to play your New Year’s Eve party) so Realme’s 8i (€199) is something of an anomaly in the world of slick stuff. As well as that velvety refresh rate, the 8i’s 6.6in FHD+ display has a 90.8% screen-to-body ratio, with a 5000mAh battery that Realme reckons will keep it trucking for up to 40 hours. Power is provided by a Helio G96 processor, which is a joint venture between Realme and Mediatek, and its 4GB of RAM can be upgraded to 7GB if you think you’re going to need some extra oomph. Round the back you’ll find a 50MP main camera and a pair of 2MP sensors, one for macro shots and one for depth, but you’ll probably be too busy admiring the silky screen on the front to use any of them. 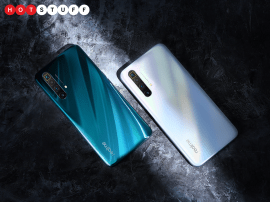