Since the Sony PlayStation 5 arrived late last year, there’s been but a single colour finish for its excellent DualSense wireless controller: the default white/black (with a subtle hint of blue for the beady-eyed). That’s about to change thanks to the imminent introduction of the rich crimson Cosmic Red and (err… black) Black options. Available from June (presumably for the same £60 you’d pay for the current controller), the new DualSenses also feature that tinge of blue lighting – and Sony says the new colours have been chosen because they complement each other and the original. Let’s hope they’re easier to get your hands on than the PS5 itself, which is still extremely difficult to come by. 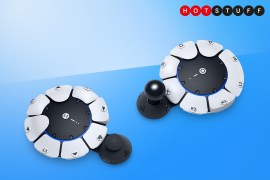