Cunningly tapping into the collector market, Evercade gave us a portable handheld with physical carts to plug in. It was followed by four-player telly console Evercade VS. Next up, Evercade EXP is ready to raid your piggy bank.

The new machine is an evolution of the original Evercade, dealing with that device’s shortcomings and adding one superb new feature. So you now get an IPS display, USB-C charging, built-in Wi-Fi for speedy updates, and L2/R2 triggers. And the new bit? Tate mode, which means you can spin your console 90 degrees and take on vertical games in the way they should be played. This will prove transformative to plenty of existing Evercade titles, including Burger Time, Centipede and Mysterious Stones.

The folks over at Evercade HQ add that the new device has beefed up specs too, gaining the 1.5Ghz processor and 4GB memory from the VS, potentially unlocking the means to play more ambitious titles. Natch, all this new stuff comes at a price – when the unit rocks up this winter, it’ll set you back £129.99/$149.99, but you will get the Irem Arcade 1 cartridge to soothe the pain. And a ton of Capcom classics.

A £179.99 limited edition unit’s also on the way, dressed in moody black. Its box includes a hard carry case, several art cards you’ll instantly lose and get annoyed about, a poster, a certificate of authenticity, a keyring and – most importantly – a second cart: Toaplan Arcade 1.

If you’re an existing Evercade player, you might be all HANG ON A MINUTE. And, yes, those two carts we’ve mentioned are new. The Irem one has six games: In The Hunt, seminal shooter R-Type, bonafide classic Moon Patrol, 10 Yard Fight, Battle Chopper (Mr Heli) and Lightning Swords.

With Toaplan’s, you get eight games: Flying Shark, Alcon (Slap Fight), Tiger-Heli, Truxton, Zero Wing, Guardian, Teki-Paki and Snow Bros – the last of which has co-op multiplayer that’ll be fantastic on the VS. We assume both carts will also be sold separately.

Can you play Capcom on EXP? Shoryuken!

The surprises don’t end there either. When it was originally announced, the Evercade folks talked about bonus content and we assumed that’d be the odd indie hit or something. Nope. Evercade EXP will now come with 18(!) Capcom hits built right into the unit. Which hits? These hits:

Blimey, eh? And if you’re worried about Evercade casually tossing aside the collectable carts element, in favour of digital, don’t be. On Twitter, the official Evercade account said: “For those that are asking, physical is still our primary outlet and we will continue to produce cartridges. This is specifically a bonus for the Evercade EXP and currently the only way we could bring Capcom to you at this time.”

Additionally, Stuff has been told the company is exploring ways to connect the EXP to the VS, so people can play all those Capcom goodies in multiplayer on the big screen.

Evercade VS brings retro to your telly, with plug-in cartridges and local multiplayer 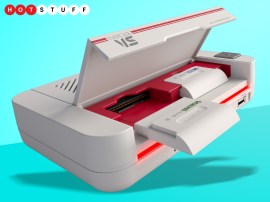 Plug (in) and play 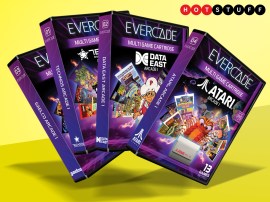