You can’t always get what you want, but if you’re after a record player that honours one of the biggest rock ‘n’ roll bands the world has ever seen, well, it just might be your lucky day. Following previous collaborations with The Beatles and Parov Stelar, Austrian brand Pro-Ject Audio Systems has launched its Rolling Stones Record Player. It’s essentially a special edition of Pro-Ject’s (very good) Debut III turntable, but with John Pasche’s iconic tongue-and-lips logo taking pride of place on the glossy base. Getting it hooked up to a high-end Hi-Fi system is a painless process, so you can a full blast Jagger interrupting the neighbours’ afternoon in no time at all. Pick one up now for £329. 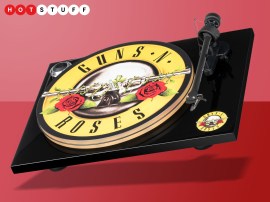