Just because you’ve given up on wired headphones completely, it doesn’t mean you have to put up with sub-par sound. Edifier’s latest true wireless in-ears have picked up two new high-quality codecs that promise high-resolution audio support on compatible hardware.

Not all phones play nicely with Snapdragon Sound, but given so many Android handsets are rocking a Qualcomm CPU, expect it to become more widely supported very soon.

The buds themselves have a dual-driver layout, pairing a Knowles balanced armature with a 10mm dynamic driver to cover a wider frequency range. Edifier says keen-eared listeners can expect 20Hz-40KHz coverage.

Active noise cancellation makes a return from the original NeoBuds Pro. Three microphones on each earbud are able to cancel out droning background distractions, so you can appreciate the finer details of your tunes without needing to pump up the volume. They’re also IP54 water resistant, so you’ll be able to take ’em out for a run and not panic should it start to rain.

Battery life should be between five and a half and six hours per charge, depending on if you’re using ANC or not. The charging case (which has a nifty customisable RGB LED for added style points) adds a further 16 to 19 hours before it too will need to top up.

You’ll be able to pick up the Edifier NeoBuds Pro S right now from Amazon, with prices starting at an Apple AirPod Pro-besting £149. 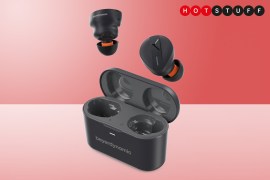