“Compact yet powerful” doesn’t really begin to describe the Phantom II, the insanely loud streaming speaker from French audio experts/neighbour haters Devialet. If the one thing holding you back from bass strong enough to rattle your building’s foundations was colour choice, the firm has a new special edition that might pique your interest. Or earn you an antisocial behaviour order.

The Phantom II Deep Blue is the second exclusive colourway from the brand, and was apparently chosen to “visually reflect the astonishing deepness of bass and the power of the sound waves” created by each deceptively small speaker. The unique styling remains unchanged, but the outer shell is now finished in a fetching, ocean-inspired hue.

Deep Blue has the same sonic punch as the standard Phantom II, meaning 98 decibels – not far off the levels you subject your ears to at a live music gig. You get the same 900 watts of peak power (400W RMS), same input selection (AirPlay 2, aux, Bluetooth, network, Spotify, UPnP, Wi-Fi) and same comprehensive smartphone companion app. All in a unit that clocks in at under three litres.

As before, you can hook up multiple speakers for stereo or multiroom audio.

To mark Deep Blue’s arrival, Devialet has drafted in ambient techno DJ Luigi Tozzi for an exclusive mix. The playlist is designed to show off the Phantom II’s audio abilities, which go a lot further than just seismograph-registering bass. The playlist is available on Spotify and Tidal, along with other streaming music platforms.

If you’re a fan of the new styling, you’d better move quickly: only 1000 units will be produced worldwide, and are on sale now. Prices are set to start at £1290 in the UK, either direct from Devialet or from Harrods, Selfridges and other authorised resellers.

Better than the Devialet you know 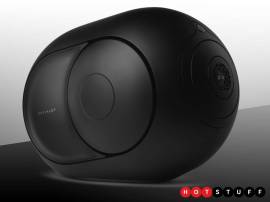