Home / Features / Sony PlayStation VR2 preview: everything we know so far about PSVR2 for the PS5

Here’s everything you need to know about Sony’s PSVR2 headset for the PS5. Sony’s PlayStation 5 was launched with plenty of promise and potential, but it had a question mark: would there be a new PlayStation VR2 headset to go with it? The answer was yes and now, the PSVR2 is imminent.

Sure, you can use the PS4’s PlayStation VR headset with supported PS4 games on the PS5. But the console headset, which was released in 2016, feels increasingly long in the tooth compared to other current virtual reality devices.

Finally, in February 2021, Sony announced that a next-generation PlayStation VR headset was on the way and the PSVR2 release date is soon – 22 February 2023.We now know most of the details. Here’s everything you need to know about PlayStation VR 2

In February 2021, a post on the official PlayStation.Blog broke the news that the PS VR2 wouldn’t be released before the end of 2022, quite a surprising prediction considering that was a full two years before launch. But it proved to be accurate…

An August 2022 announcement stated that ‘early 2023’ was now the release window for the new device, followed by an early November announcement that the launch date is 22 February 2023. For people in the UK, US, Germany, France, Belgium, Netherlands, and Luxembourg, the PS VR2 can be pre-ordered now from the Sony PlayStation Direct store.

Rumours have suggested that the continued shortage of PS5 consoles could be partly to blame for the delayed launch. After all, there’s no point in launching peripherals for a console that many people are still struggling to get their hands on. However, as of early 2023 it seems that the supply issues are finally easing.

How much will the PSVR2 price be?

The price is high at $550/£530. Yep, higher than the PlayStation 5 console itself. That is more than we were expecting – we thought it might hit the $499 price point. The original version was well-priced at the time, but the spec of the sequel is much more grand.

When the original PlayStation VR was released in 2016 it sold for £349 in the UK and $399 in the US, which was pretty reasonable compared to expensive PC-based competitors.

In the time since, VR headsets have become both more and less expensive. You can still shell out big for a robust PC VR system, such as the impressive Valve Index, but you can get the self-contained Meta Quest 2 for just £299, and it’s a big step up from the original PS VR hardware in many ways.

Sony PlayStation VR2 design – what does the headset look like?

Sony first unveiled the PlayStation VR2 on its blog on 22 February 2022. It turns out that was actually a whole year before the launch date. If you haven’t seen the original PSVR for a while you might struggle to tell the difference. Put them side-by-side, though, and the new version is undeniably sleeker and lighter than its predecessor. It certainly looks like it belongs with a PS5.

While it might not look dramatically different, then, on the inside the PS VR2 features some neat new tech to bring it in line with the competition. A pair of 120fps, 4K HDR OLED displays will combine with eye-tracking tech to do a better job of tricking your brain into thinking what you’re seeing is real, while four external cameras mean your head movements are more accurately reflected in the virtual world. There’s also a new vibration motor that will make you feel every bump, blast and bullet.

Setup should be simpler too, with just a single cable connecting the headset to your PS5, while there are more ways to fine-tune it to ensure it fits comfortably, including a new lens adjustment dial. There’s also a new vent design that should help to stop the screens fogging up and your bonce overheating during long sessions away from the real world.

“Our goal is to create a headset that will not only become an attractive part of your living room decor, but will also keep you immersed in your game world, to the point where you almost forget you are using a headset or controller,” wrote Hideaki Nishino, Sony’s SVP of Platform Experience, when unveiling the headset.

And while the outside of the headset might be pretty much what we expected, there’s a surprise on the inside.

While we will probably never find out what exactly is humming away inside the PS VR2 (Sony never publicly released that information about the original model), we do know that there will be one processor in the headset, taking the feed from the PlayStation 5 and sending it to the screens, and another in each hand controller. This is the first time MediaTek, a Taiwanese company that makes processors for phones by Honor, OnePlus and Xiaomi, has made a chip for a VR system (MediaTek’s involvement was announced in November 2022).

We knew what the PS VR2’s controllers would look like a whole year before the headset itself had been unveiled – and they should be a vast improvement over the repurposed PlayStation Move controllers used to interact with the original.

Not dissimilar in design to the Oculus Touch controllers, the orb-like handsets use some of the same technology found in the PS5’s DualSense pad, including analogue sticks and buttons, precise haptic feedback, and adaptive triggers that provide different levels of resistance depending on what’s happening in the game.

They’ll also be able to detect where your digits are positioned without even having to press a button, which should mean even more precise virtual interactions. We recently saw the VR2’s finger touch detection in action, via a Tweet embedded below, that seems to show how the VR2’s finger tracking will work in action. If the video is to believed, it looks like the VR2 will offer a big boost to hand gesture accuracy and interactivity by a decent margin.

Best of all, there’s no glowing ball on the top and no camera needed to track them – the PS VR2 headset will do that itself.

These are real deal and they’re sure to provide a dramatic upgrade versus the original Move controllers.

What will the Sony PlayStation VR2 interface look like?

While we’re yet to strap on the headset ourselves, Sony gave us the next best thing recently. In a post on the official PlayStation blog, product manager Yasuo Takahashi revealed See-Through view, which lets you toggle from your game to a view of your surroundings. We’ve seen similar on Valve, Oculus and HTC headsets, so it’s great to see Sony adding the function here.

You’ll be able to adjust your play area using the VR2’s remotes and cameras, expanding or restricting the space if it wasn’t quite detected automatically.

There’s also a broadcast function, letting you hook up a PS5 HD Camera and film yourself playing in VR. Streamers should be able to cut down on the kit needed to start broadcasting, as it can all be handled directly on the console rather than via a PC.

Sony confirmed this itself, so short of a few visual tweaks between now and launch, this is what to expect.

For all of its clunkiness and limitations, the PlayStation VR was ultimately saved by an excellent selection of games, bringing together VR faves like Beat Saber and Superhot VR with originals like Astro Bot: Rescue Mission, Tetris Effect, Blood & Truth, and quite a lot more.

Now, we’ve finally got a list of more than 30 games that will are lined up for release within one month of the PS VR2’s launch. Horizon Call of the Mountain, No Man’s Sky, Resident Evil Village and a free PS VR2 update for Gran Turismo 7 are set for launch day. Our stand outs so far include puzzle game The Last Clockwinder, the tripped out Rez Infinite and boxing sim Creed: Rise to Glory. 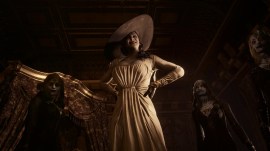