Home / Features / OnePlus 5 vs Google Pixel: Which is best? 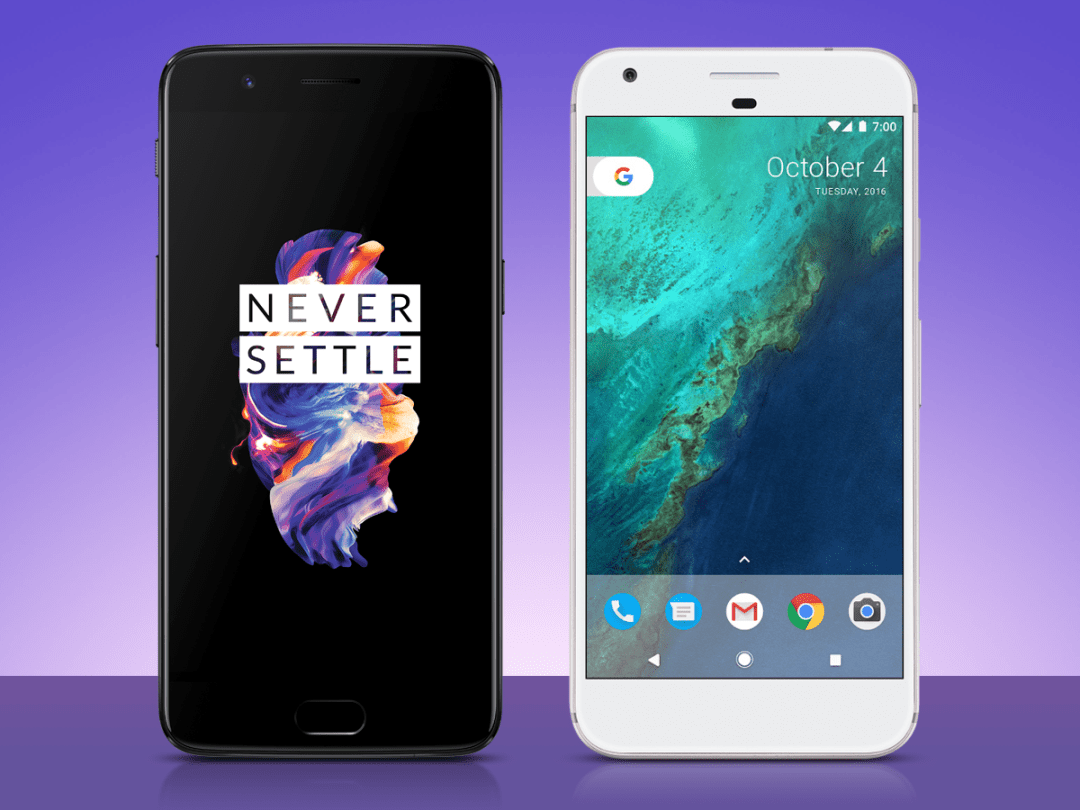 If you’re looking for an Android with an iPhone-like aesthetic, then you’ve got a new option: the OnePlus 5, which is the spitting image of the iPhone 7 Plus.

Of course, it’s not the only one out there: the Huawei P10 is another iPhone-esque Android that warrants a look, while the Google Pixel is surely the best-known of the bunch. The Pixel is Google’s attempt to deliver the ultimate Android experience, albeit with a pretty familiar silhouette from its biggest rival.

In any case, the OnePlus 5 and Google Pixel are two of the most notable Android phones out there today, but can the latest OnePlus really compete with Google’s own offering? Here’s how these top-tier options compare.

As mentioned above, both of these handsets might look familiar at a glance – and the OnePlus 5 is arguably the closer of the bunch to the iPhone aesthetic. It has a fair amount of top and bottom bezel, along with the fingerprint sensor on the bottom, while the back is also similarly styled.

The Pixel makes more tweaks to the iPhone formula, though, moving the fingerprint sensor to the upper back and also putting a glass cutout there for extra style points. But the Pixel feels a little less premium than the iPhone, while the slimmer OnePlus 5 doesn’t feel cheap at all. That’s surprising, of course, given the price point.

Neither phone has water resistance, meanwhile, so that’s no benefit to either. All told, while these phones have some visual similarities, we dig the look and feel of the OnePlus 5 more.

Unlike a lot of the top Android phones right now, the OnePlus 5 and Google Pixel both opted not to use Quad HD (2560×1440) displays – and instead use lower-resolution 1080p screens.

That’s not really a problem when it comes to relatively small devices, and a pixels-per-inch (ppi) count of 400+ still looks brilliant. On the OnePlus 5, you get a nice-sized 5.5in screen at 401ppi, while the standard Pixel comes in a bit smaller at 5in, but a crisper 441ppi due to the size difference.

We can’t spot a serious clarity difference between the two, and we doubt you will either. Both are AMOLED displays, too, which means you get excellent contrast and deep blacks. All told, both of these screens are excellent, and aside from the size difference, they’re comparable too.

Google does take one big win against the OnePlus 5 – and nearly any other handset available today – when it comes to the camera. Quite simply, the Pixel has one of the absolute best shooters on the market today, even after several months of release.

The Pixel truly lives up to the immense hype spouted about its camera, as the 12-megapixel (f/2.0) back camera takes fantastic HDR+ auto shots and has brilliant outdoors exposure. Between the phase detection and laser autofocus, you’ll get sharp results even without optical image stabilisation.

Meanwhile, the electronic image stabilisation is the best around. With just one back camera, the Pixel doesn’t have the party tricks of dual-camera setups, like blurred-backdrop portrait shots, but it excels as one of the top single shooters today.

On the other hand, the OnePlus 5 actually does have a dual setup, with a 16MP (f/1.7) main sensor and a 20MP (f/2.6) sensor alongside. Together, they grab really fantastic shots, with realistic colours and dazzling contrast, and the speedy HDR shooting mode doesn’t disappoint.

Unlike past OnePlus efforts, the OnePlus 5 can match up with almost any other phone camera today – but the Pixel wins out on a couple of key points: we saw a bit more clarity in still images, especially around the edges, and Google’s video stabilisation is still king.

They’re close, but spending extra cash for the Pixel can give you a small advantage in day-to-day shooting.

Since both of these devices rely on Qualcomm processors, the answer here is pretty cut and dry. Released last autumn, the Pixel uses the Snapdragon 821 chip, which is a bit faster than the previous 820 and proves to be super speedy with stock Android Nougat equipped.

Clearly, the 4GB RAM and Google’s harmonious marriage of hardware and software pay a lot of dividends here, and no phone we’ve used feels any faster than this.

However, the OnePlus 5 bumps up to the newer Snapdragon 835, which bests its predecessor in benchmark tests, and the handset has a whopping 6GB RAM on the base model, and an insane 8GB RAM in the £499 Midnight Black edition.

OnePlus doesn’t have stock Android, but the OxygenOS skin here is about as close to stock as you’ll find on a non-Pixel phone today, and it’s a winner in terms of look, usability, and speed. In day-to-day usage, neither of these phones is significantly faster than the other, and they can both handle whatever games and media you throw their way.

But in terms of raw power, the OnePlus 5 has the advantage – and all that extra speed could come in handy further in its lifespan, as processing needs increase.

Battery and perks: Plus more

Both of these handsets will give you a strong day’s worth of usage, with the Pixel packing a 2,770mAh battery and the OnePlus 5 going larger at 3,300mAh. The OnePlus 5 has a bigger screen to power, of course, but we’ve been just a bit more impressed by the battery life. It’s not as big of a difference as the raw size numbers might suggest, however.

When it comes to storage, both of these phones skipped out on microSD support, which is disappointing. You’ll get 64GB inside the base OnePlus 5, or 128GB (alongside the 2GB extra RAM) if you spend the extra £50 for the pricier edition.

Meanwhile, the Pixel offers only 32GB in the base £599 model, and you’ll have to pay a staggering £100 more to knock that up to 128GB. So yes, the OnePlus takes this comparison.

In terms of bonus perks, the Pixel has a big one in the form of Daydream VR support for its Daydream View headset shell. That’s great, and certainly worth considering if you’re spending several hundred quid on a smartphone.

But if we’re talking about day-to-day usage and value for money, we’d still give this category to OnePlus.

When you factor in value, the OnePlus 5 clearly takes this comparison at £150 less for the base model. But even if you don’t think about the asking price, we’d still rather use the OnePlus 5.

It’s the more stylish phone, it packs a bit more power, and it gets the edge on battery life and storage. The Pixel nudges ahead on camera quality, but the differences are pretty small – not enough for the average user to spend another £150 on.

Look, we were slightly underwhelmed by the Pixel when it came out, especially compared to other Android flagships that fell into that same £600-and-up price pocket. But when you put it up against a similarly-equipped Android that costs so much less, well… it’s not a great result for Google.