We’ve spent enough hours in front of the telly to know what makes good watching. Naturally, we reckon we could have a pretty decent stab at producing our own shows, so we’ve compiled a list of guaranteed hits.

They’re all remakes designed to breathe some fresh air into some bona fide classics.

Why is it always foreign shows that get remade in English? Why not vice versa? Breaking Bad in Flemish tells the story of Wilhelm White, a teacher from the Belgian city of Genk, who turns locally grown poppies into heroin, which he sells to support his family after he’s diagnosed with a terminal illness.

Five Children and IT

A loosely educational show about a group of school children who discover a mysterious creature in a local park that assesses their levels of computer literacy and then teaches them how to code. Their newfound skills lead to highly lucrative jobs at Facebook. Zuckerberg promptly buys the land housing IT and fills it with adverts.

Stuff’s very own Laurence Llewllyn Bowen lookalike, Tom Parsons, spends the weekend in a stranger’s house sorting out the patchy Wi-Fi in the back bedroom, installing a decent surround sound system and ripping all their DVDs to a 5TB NAS drive (for their own personal use you understand), while subjecting them to his awful taste in music.

Gentle, time travel comedy about a social media evangelist (played by Paul Danan) who lives a double life, travelling through a wormhole in the airing cupboard of his Dalston flat to the first Gulf War. There he falls in love with an Iraqi market stall owner who fails to understand the importance of engaging with brands and refuses to ‘like’ any of his Instagram posts.

Halo’s near-mute hero swaps his plasma rifle for a miniature blowtorch and shows viewers how to cook various delicacies from the Halo universe, including slow-roasted Grunt with a pea foam. At the end of each episode he tries to feed his culinary creation to Guilty Spark but always fails because Guilty Spark is a computer that doesn’t have a mouth.

Live-action remake of the ‘90s cartoon about a superstar football team made up of slightly offensive national stereotypes. Similar to WWF wrestling each game will be scripted, with real-life professional footballers filling each on-pitch role. Well, they’re so accomplished at pretending to be hurt during real games, why not put those skills to good use?

The APPrentice with Steve Ballmer

5-minute ‘interactive webisode’ in which Microsoft’s bellowing ex-boss, Steve Ballmer, pitches you a selection of the best apps from the Windows Phone store in his own unique way. At the end viewers can use an on-screen voting system to pick their favourite, with the rest consigned to the internal memory of a Nokia Lumia 800 and buried in the Finnish tundra. Part one of one.

Antiques dealer and professional Ebay user Jack Lovejoy (played by Danny Dyer) tracks down rogue sellers while making last-second bids on vintage furniture. Rather than making all episodes available to watch at once, Netflix-style, the viewer will have to pay over the odds for them to be delivered individually, or hire a van and collect them from the studio.

Using state-of-the-art CGI techniques Lenny Henry plays all characters (including animals) in this remake of the ‘90s sitcom, with the original’s barbershop setting changed for a budget hotel, owned and run by Mr Desmond. In this pilot episode he hires a pig to run the hotel bar but its lack of opposable thumbs proves to be an obstacle and chaos ensues.

The Killing for Kids

Animated remake of the Scandinavian murder mystery with all characters replaced with talking sheep. Morten Sheep has lost his favourite wooly jumper and, fearing it dead, enlists the help of Jan Sheep, Ann Sheep and Lars Sheep to track it down. So slow-paced it’ll send even the most hyperactive child to sleep, it’s perfect bedtime TV for little Tarquin and Ocado.

For more on Netflix and the future of TV, pick up the May issue of Stuff magazine. On sale now.

READ MORE: Stuff at 15: future tech predictions for the next 15 years

Feel like a binge-watch? Here are some Prime Video box sets to get you started. Updated for January 2023 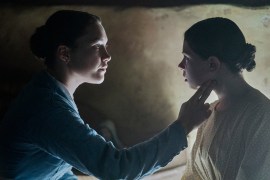