You are a tiny, utterly infinitesmal, insignificant spec of nothingness. But it’s okay. So is everybody else.

There’s no greater reminder of just how small we all are, than craning our faces towards the heavens and drinking in the starlight.

If you fancy a sobering but spectacular reminder of your complete insignificance in the universe, there’s plenty of gear out there to help oblige and capture your astronomic curiosity.

Here’s everything you need to become a budding astronomer:

For earth-bound cameras, invisible wavelengths of light like ultraviolet are a distraction, so they come with coatings and filters to remove them.

But in astrophotography, photons of any persuasion are welcome, with some of the best detail in deep space objects found here. Canon’s special full-spectrum DSLRs can’t be beaten for what they capture, and the 60Da is their current Milky Way master.

Go for the body-only option, using the savings to get an eyepiece adaptor to suit you.

Though your brain is excited about the idea of standing around for hours and staring into the dawn of time, your feet aren’t quite as keen. And your back isn’t too happy about it either. For long stargazing sessions a seat is mandatory, and they don’t come much better than this one.

Made from a single sheet of durable, weatherproof plastic, the Flux packs flat to a highly portable envelope, but magically expands to a proper seat in seconds.

Sure, onlookers will assume you are off to the opera, but these super-compact widefield binoculars are highly useful when it comes to looking at some of the universe’s big-scale phenomena, like constellations or those never-know-quite-where-they’ll-be meteors.

A respectable 2.1x bump in eye-power gives you extra detail without having to sacrifice seeing the big picture. And they do work pretty well at the opera.

This is an obliging robot butler of a telescope:the motorised, battery-powered Go-To mount has Wi-Fi and GPS, so you can pick a star or planet in the iOS or Android app and have the scope find and track the object.

And such gadgetry doesn’t come at the expense of optics: the 8in Schmidt-Cassegrain scope picks out planetary details like Saturn’s rings and Jupiter’s spots. It’s about the best, easiest to use multi-purpose telescope you can buy.

How to spot shooting stars

The annual Taurids meteor shower will be at its peak on 11-12 November. Your ideal viewing spot will have little light pollution and a wide view of the sky. Check out darkskydiscovery.org.uk for somewhere near you.

2. Look in the right place

The Taurids will appear to emanate from the Taurus constellation (above and to the right of Orion). They can appear in any part of the sky, but you’ll have the best chance of seeing them some 15° from the centre of Taurus.

For bonus points, print out a constellation map and try to plot any meteors that you see on it. Recording observations is fun, a habit of good astronomers, and sometimes useful.

Any camera with a long exposure time can be set up to take good pics. You will need some luck, but take some test shots that expose the stars correctly. Use a large memory card and take as many snaps as you can.

Focusing perfectly on a tiny point of light that’s so far away it can barely be expressed in miles is often tricky. And having to re-adjust everything just because you want to swap an eyepiece or cue up your camera is beyond annoying, which is why the simple but amazing Q Turret deserves some sort of award for making the blindingly obvious work so very well.

It’s effectively a carousel of four 1.25in eyepiece mounts to which you may attach your optics of choice – each is then a simple swivel away.

Improve your focus › Get your Baader Q turret (£70) here

Take the entire sum of human knowledge about the universe: that’s 25 million stars, 750,000 galaxies, over half a million other celestial objects, detailed maps of the moon and Mars, hi-res images from NASA missions, calendars of events including meteor showers, encyclopaedic entries on just about everything related to the heavens and plenty more.

Now bake that into a single, offline, easy-to-use and breathtakingly gorgeous app. There are cheaper versions of the app available, but why compromise on the universe?

Fancy playing among the stars?

Read more › All the hottest stuff, on one scorching page

Stuff’s Guide to Photography: how to master astrophotography

Because nothing would make Brian Cox happier… 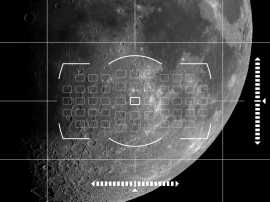