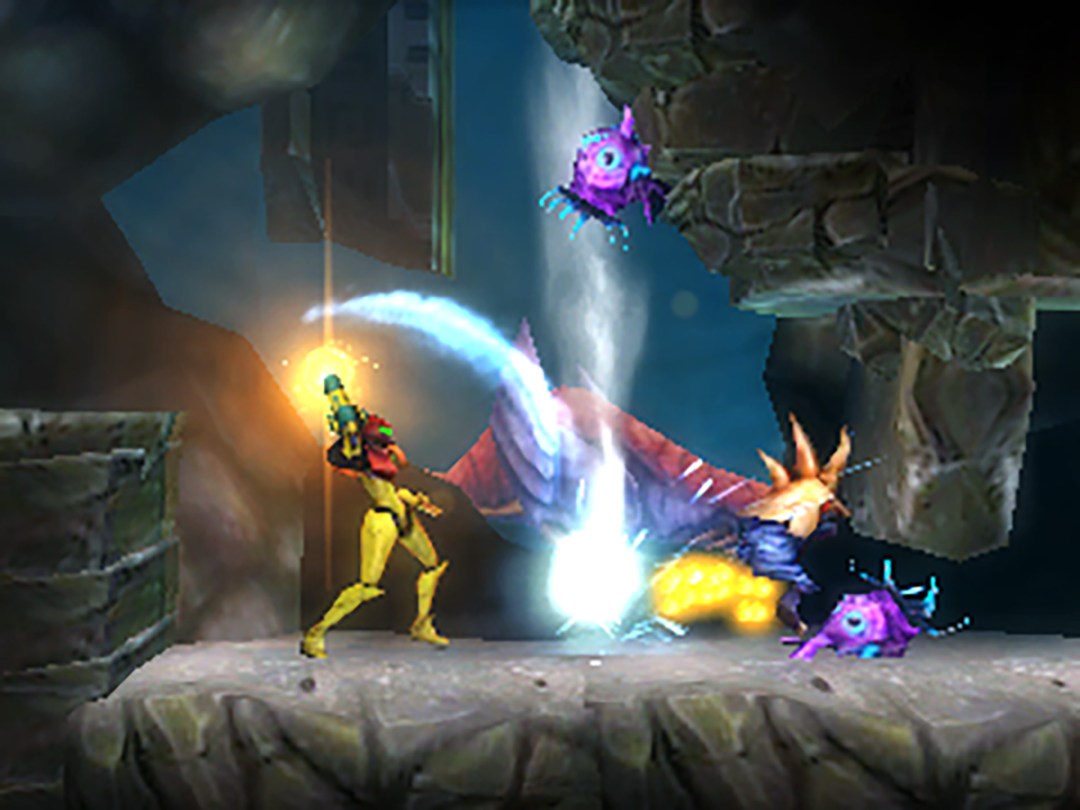 With Nintendo’s Switch having well and truly taken flight, the 3DS is now entering its distinguished twilight years. Given just how many brilliant games have seen release for this portable marvel, it’s never too late to start enjoying the best of them.

Nintendo’s quirky little handheld boasts quite the library of miniturized classics, and they’re all available to play whether you have the standard 3DS, the streamlined New 2DS XL, or the enhanced New Nintendo 3DS, but there’s plenty more worth investigating.

Yes, classic series like Super Mario and The Legend of Zelda are present and accounted for, but dig a little deeper and you’ll find more reasons to stay glued to this dual-screened device. Especially now Metroid has made it’s grand return to a Nintendo console. Here are 13 of the absolute top games you can play today on Nintendo 3DS.

A remake of Metroid II for GameBoy, Samus Returns reimagines almost every aspect of the portable favourite for its 3DS debut. Combat is now focused on countering your many foes, a new sprawling map has been crafted for the adventure and those pesky Metroids have never looked more resplendent in the palm of your hands.

As the intergalactic bounty hunter’s first turn on a Nintendo console for seven years, Samus Returns unsurprisingly sticks to the same schtick that made its predecessors so beloved. That means exploration around a hostile alien landscape is very much the order of the day. The more you indulge your curiosity, the more health and weaponry you’ll have to slay the game’s many fearsome bosses. It’s a thrilling – if familiar – routine and one that ensures Samus Returns is a welcome revival for this uniquely feted franchise.

Got Pokémon Go to thank for your newfound (or revitalized) interest in monster-bagging? It’s time to turn your attention to Pokémon Sun and/or Pokémon Moon instead. These fully-fledged series entries augment the classic collecting and battling approach with some nice tweaks.

The tropical Alola region and its inhabitants give the game a sunny disposition, while dozens of new monsters, glossier graphics, and fresh Z-Move attacks boost the familiar formula. While not a dramatic change from the classic template, it’s arguably the best Pokémon has ever been.

Finding the perfect middle ground between the series’ equally brilliant 2D and 3D platform-action templates, Super Mario 3D Land is bursting with creative stages and scenarios. It effortlessly shifts between side-scrolling and free-roaming moments, with the camera framing the action a little differently in each new area, making the whole game feel fresh – and really tailored for the 3D effect.

It’s one of Mario’s top adventures, even in a series marked by some of the best-loved games of all-time.

The Legend of Zelda: A Link Between Worlds

Rather than release another Zelda remake for 3DS, Nintendo opted instead to return to the world of fan-favorite A Link To The Past from the SNES and design a whole new adventure.

A Link Between Worlds has the familiar charm of the 16-bit entry, but also modern touches, not to mention a big twist: the ability to turn into a 2D drawing and slide along walls and around hazards.

The less-linear quest is bright and memorable, making for yet another classic action role-playing entry. And if it’s remakes you want, don’t miss The Legend Of Zelda: Ocarina Of Time 3D and Majora’s Mask 3D, which update the respective beloved N64 adventures.

Download The Legend of Zelda: A Link Between Worlds from the Nintendo eShop

It’d be difficult to describe Animal Crossing without it sounding like a lot of time wasting and busywork, yet Nintendo’s adorable life simulation manages to suck players in for hours and hours.

New Leaf is arguably the best of the series, with the handheld design making it easy to pop in and out of your colourful city, increased social functionality adding to its appeal, and your new role as mayor giving you more say over the town’s development. Among addictions, it’s an awfully cute one.

Also Read › Nintendo Switch: Everything we know so far

Amidst all of these games with colourful characters and blistering action, a title like Picross 3D: Round 2 shouldn’t stand out, right? Well, puzzle games are perfect for the intimate experience of handheld gaming, as we all know from Tetris on Game Boy, and time hasn’t dulled that fact.

Picross 3D is all about using number logic to chip away at blocks, thus revealing the hidden item within, and the 300+ puzzles are tricky but highly rewarding to solve. Don’t worry if you missed the DS original: Round 2 scales well from its lower difficulty levels to its toughest challenges. It’s out in the States now and launches across Europe on 2 December.

While its Wii U successor is a more memorable affair, Mario Kart 7 remains an essential play for 3DS owners of all stripes. As ever, it’s about whipping the portly plumber and his allies and enemies alike around cartoonish racetracks, with a nice selection of new locales and remastered favorites from past entries.

You’ll occasionally glide through the air or propel ahead underwater here, but although neither option hugely changes the familiar formula that isn’t a problem when it’s this much fun.

Pullblox – confusingly known as Pushmo in the States – is probably the least known of the bunch, but it’s one of the best original titles on the 3DS. This inventive puzzle game sees you pulling out differently shaped blocks from a wall (often shown in pixel-art patterns) to create pathways to the top, whereupon you’ll rescue a kid and reach the goal.

It has more than 250 stages, plus the ability to create and share your own, and best of all it’s a dirt-cheap download. Just a few quid for many hours of fun.

Same-screen multiplayer brawler Super Smash Bros. hardly seemed worth bringing to a handheld, but credit Nintendo for proving naysayers wrong. While it lacks that hook of having a bunch of friends crowd around a console and a TV, you can take the battle online and command a corral of classic Nintendo characters in combat.

The 3DS version also has single-player modes for solo play, and while the fighting gameplay is simple, the abundance of fan service is nearly impossible to dislike.

One of the finest modern tactical role-playing games on any platform, Fire Emblem: Awakening delivers turn-based battles with real stakes: if you play on the "Classic" setting and lose a character in combat, he or she is gone forever. Simple as that.

Of course, you can settle for an easier route, but the extra investment in your heroes adds weight to this fantasy experience, which also shines thanks to an intriguing narrative and ample character customisation. And if you like Awakening, be sure to check out the also-excellent Fire Emblem Fates, as well.

There’s a long tradition of fighting games being neutered for handheld release, but Super Street Fighter IV bucks that trend on 3DS, delivering an essentially complete version of the revitalised modern favorite.

True, die-hards aren’t going to settle for tiny buttons and no arcade stick, but for the common gamer, it has everything you need for fighting action on the go: finely tuned fighting mechanics, a massive roster, smooth presentation (with a nice 3D effect), and even on-the-go online play.

The 3DS eShop has plenty of old-school games available to purchase, but if you’re seeking something that looks and plays like a retro classic, but is actually totally new, grab Shovel Knight.

It’s one of the best games to attempt a total throwback design, delivering not only pitch-perfect NES-level graphics, but also the kind of simple-yet-challenging platform-action that evokes all kinds of memories from nostalgic gamers. It’s a great fit for a portable screen, too.

Generations is the apex of Capcom’s hack-and-slash favourite, pulling together top content from the entire series to create the ultimate, on-the-go action role-playing experience. And it’s a lot friendlier to newcomers than past entries, in case you’ve been stymied before.

You’ll also find a lot more customization as you choose from Hunting Styles and specialize your character, but the series’ main thrill remains teaming up with online allies to take down hulking beasts – and then collecting the loot.