Home / Awards / The Stuff Gadget Awards 2022: Speaker of the year

Here at Stuff, we spend a lot of time flirting with noise complaints – it’s all part of the job, and with so many speakers coming through the door there’s rarely a quiet moment. Now it’s time to celebrate the very best of them.

Picking this year’s winner involved sifting through a lot of Phil Collins albums (hard life, we know), and as you’ll soon find out we eventually went with an update to one of our all-time favourites, which once again places sound quality and portability above all else.

If this was a fashion contest, the runner-up would have won at a canter, but it’s not all about good looks.

Another great year for our grateful ears, then, even if the neighbours and certain relatives would possibly disagree.

Speaker of the year: JBL Flip 6

It takes confidence to be a straight-up, no-frills Bluetooth speaker in 2022, but given that JBL has been on such a winning streak with the Flip series that it’s now arrived at the sixth edition, it’s no wonder that such confidence exists.

The Flip 6’s highly rubberised rugged design is very much in keeping with every Flip before it, but crack it open and you’ll find notable enhancements. A new tweeter joins the racetrack-shaped driver and dual passive radiators, resulting in detailed mids and highs to go with a generous helping of bass. Or in plain English, it’ll handle anything in your party playlist with aplomb. Bluetooth 5.1 connectivity, 12 hours of battery life and an improved IP67 waterproofing rating mean we’re still not over the Flip series half a dozen speakers later.

The original Marshall Emberton is one of our favourite Bluetooth speakers of recent years, so it was really going to have drop the ball if we weren’t going to be just as taken by its sequel. Happily, the Emberton II is just an improvement on the first model, retaining the same amp-like good looks and 2in full-range drivers, but boosting battery life to up to 30 hours and upping the waterproofing to IP67 so you can listen to Metallica in the bath without panicking.

If you’re after beefy wireless stereo sound, we were rather taken by the Mitchell Acoustics UStream One in our five star review at the tail end of 2021, while the Sonos Sub Mini is an ideal add-on for owners of Sonos’ smaller soundbars looking for a bit more bass.

Wireless speaker tech explained: should you go for Wi-Fi or Bluetooth?

Ciao, cables! Here’s everything you need to know about cord-free audio in the form of wireless speaker tech 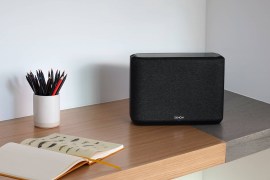