Wolfenstein: The New Order probably isn’t the game you’re expecting. Sure, it’s got lots of Nazi-killing, just as the 1992 original did. It’s also got cyborg Nazis and the ability to dual-wield machine guns.

What’s unexpected is that it’s also got a heart and an often sombre, melancholy tone and a preoccupation with the pointlessness of war.

Don’t worry, it’s also got carnage by the panzer-load, and even if it doesn’t quite get the balance between its thoughtful and action-packed sides quite right, it does provide a very effective distraction from the big lull in the next-gen release schedule.

Once again you’re cast as American-Polish muscle-bound hero and one-man army, B.J. Blazkowicz, but after an initial (and actually rather dull) mission set during WWII you find yourself in an alternative 1960s where the Nazis won the war, enslaved the world and gave referees the right to shoot uppity footballers who object to getting a yellow card; we’re not joking, just check this trailer.

The setting’s allowed the designers to go full-blown bonkers with the technology and machines of the now advanced Third Reich. There are now genetically-engineered super-soldiers, giant mech-like robots, little flying robots, cyborg-dogs and EMP grenades.

There are also insane characters. Deathshead returns from the last couple of (largely ignored) games, and the deranged, sadistic Frau Engel and her toy-boy Bubi are introduced.

Is any of it realistic? Heck no. But it is fun and fairly inventive. The problem is that this insanity and lack of grounding is rather at odds with the sombre mood. The game wants you to reflect upon the horror of war while giving you ever more mental and gruesome ways to kill your enemies.

And there really are loads of ways to kill your enemies, from fairly standard assault rifles to rapid-firing lasers and huge gun turrets. But it’s also possible to tackle the vast majority of the game in a more stealthy manner, sneaking around enemies, stabbing them in the back or shooting them with a silencd pistol.

The stealthy approach is encouraged by the presence of radio operators who’ll raise an alarm and call reinforcements if you’re spotted. The trick of sneakily finding and despatching of these guys before going all-guns-blazing on the reinforcement-less leftovers is probably the most satisfying way to play The New Order, but you are fairly free to play your own way, and your play style is rewarded with relevant perks – keep performing silent kills and you’ll be granted the ability to move faster without creating noise, go machine-gun crazy and you’ll be given faster dual-wield reloads.

READ MORE: Alien: Isolation will have you weeping with space terror

A trip down memory lane

There's a barely-hidden Easter Egg in The New Order that lets you play levels from the original Wolfenstein game. The blend of modern controls and old graphics and level design makes for a really fun distraction, but if there's any reward other than the nostalgia we haven't been given it.

Where is it? You really don't need our help finding it.

Pretty as a (really gory) picture

It’s not the most spectacular game in existence, but if you buy the next-gen version you get a clearly next-gen experience, with loads of detail and realistic animation to character models, bright, dynamic flashes as bullets ricochet off armour, and some brilliantly bombastic sound effects. It ran judder-free for the duration of our playthrough, too.

Cutscenes are brilliantly detailed and directed, too, even if the content sometimes jars – the sex scenes feel rather crowbarred in while the gore can be a little too nasty at times. This certainly isn’t the most tasteful gaming experience around and the 18-certificate is well earned.

I am death incarnate

There’s a bit of an issue with the difficulty level, too. The normal, “bring ‘em on” setting is far too easy most of the time and then very occasionally really chuffing hard. Similarly, respawn points are generally very forgiving but every so often rather unkind. Combine one of the unkind ones with one of the tough bits and you’ve got a recipe for occasional frustration.

But overall the new Wolfenstein game is a pleasure. There’s variety in its levels and flexibility in the way you approach combat. There’s gore, insane set-pieces and obvious-but-effective scares. And while it doesn’t do much that’s particularly new, it will keep you entertained from start to finish even as the silliness struggles against the sincerity. All in all a very effective plug for the next-gen gaming gap.

READ MORE: The 200 Greatest games of all time

It doesn’t hit every mark, but when it works Wolfenstein is an absolute blast

The balance between silly and sombre isn’t quite right 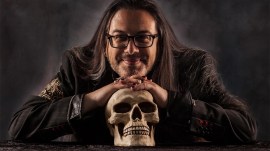