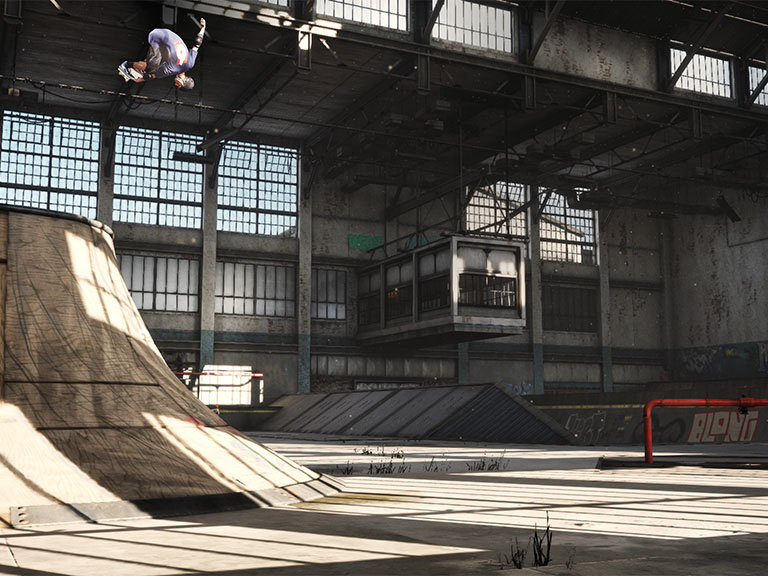 In this very occasionally lazy pop culture age we live in, news of yet another remake is often met with a collective sigh.

But when we heard that Activision and Vicarious Visions were doing a ground-up remake of the first two Tony Hawk’s Pro Skater games, we and (possibly) many others kicked on a pair of Vans, queued up some Reel Big Fish and beelined for the nearest skatepark to high five every perplexed teenager we could find.

In the late ‘90s, the now legendary arcade skateboarding series took a then pretty niche sport and transformed it into a mainstream phenomenon. But each new entry got further away from what made the early Tony Hawk’s games so good. We had downhill racing games, throwaway storylines and malfunctioning skateboard peripherals before what was supposed to be a return to the series’ roots with Tony Hawk’s Pro Skater 5. And we don’t talk about Tony Hawk’s Pro Skater 5.

Eventually, the Skate series arrived with its more simulation-based approach, and while it was brilliant in its own way, it was, like real skateboarding, humbling in its difficulty. Only Tony Hawk’s let you dress up as Spider-Man and 900 off the top of a building before landing comfortably on the roof of a moving taxi. For years, there has been a Hawk-shaped hole in our hearts.

Sometimes, the best course of action is to go right back to the start, and Tony Hawk’s Pro Skater 1+2 proves it. This is THPS as you remember it, the first two games in their entirety but with a stunning HD paint job and a few modern additions that make them feel brand new.

If looks could thrill

Like many of their early 3D era contemporaries, the first two Tony Hawk’s games are not all that easy on the eye these days. But it’s a testament to the designers that despite their low-res blockiness, so many of the iconic levels are still burned into our brains.

It’s nothing short of breathtaking, then, the first time you drop into the first game’s opening Warehouse level and feel like you’re revisiting an old friend. The layout remains broadly the same, each quarter-pipe, rail and pile of smashable boxes in its right place – but every surface your wheels hit is textured and full of detail.

The sun-kissed Venice Beach level from THPS 2 looks incredible on an HDR telly, while the semi-hidden Brookyn Banks section of NY City actually resembles its grimy real-life inspiration. And the cars are still inexplicably determined to run you over at every opportunity.

The levels in the THPS 1+2 remaster now look like you probably imagined them to when playing the originals 20 odd years ago, a similar graphical magic trick to the one Final Fantasy VII Remake pulled off earlier this year.

Just as impressive are the skateboarders themselves, who in 2020 look like human beings rather than a collection of baggy jeans-wearing shapes. Seeing a very obviously middle-aged Tony Hawk pull off his trademark trick, perfectly animated, hasn’t stopped making us grin after 20+ hours of play.

Most of the original lineup remain (all portrayed as their current age), and are now joined by a modern-day roster that includes Leticia Bufoni, Lizzie Armento and Nike SB poster boy Nyjah Huston. All are customisable with new outfits and boards that you purchase with cash earned in-game, and you can create your own skater too, with optional face mask – naturally.

In the THPS games, the music has always been nearly as important as the skating itself, and most of the first two games’ classic songs are back for the new instalment. A mixture of hip-hop, rock and pop-punk, it’s a delight to revisit even the naff tunes (of which there are several), and Activision has even managed to secure a number of more contemporary songs to complete the soundtrack. Chances are you’ve never heard Less than Jake and Skepta on the same playlist before. Reader, you’re in for a treat.

If THPS 1+2 looks a bit different, it plays exactly the same – gloriously so. In the single-player Skate Tours portion of each title (you can hop between both freely), you still have two minutes in each run to hit a series of goals that unlock new levels, a mixture of high score-chasing and increasingly tricky collectathons. In addition, there are hundreds of new challenges to tick off in each level, ranging from the laughably easy to the almost comically impossible.

The Tony Hawk’s games aren’t totally removed from real-life skateboarding, but their arcadey addictiveness still lies in pulling off ridiculous combos to build your high score, with a single mistimed button press resulting in sometimes hundreds of thousands of points being lost. It’s a risk-reward setup that can be just as pad-breakingly infuriating now as it was back then, but you’ll keep hammering that retry button well into the night.

Game-changing mechanics like manuals, reverts and acid drops, gradually introduced in each THPS instalment and crucial to maintaining combos for the big scores, are all available from the off in both games here, though purists can turn them off in settings.

Given that we’ve been known to forget which cupboard pans live in in our own home, it’s amazing how much we were able to remember from the original THPS 1 and 2 games when playing the remake. How to get the secret tape in 2‘s Hangar level, for example, or where each of the S-K-A-T-E letters can be found in School II.

And remember Office Dick, the skater-hating cop who chases you around the latter in a golf buggy? Well he looks and sounds a whole lot like a certain Tenacious D frontman now. A brilliant touch.

When you’re done with Skate Tours you’ll want to check out the Create-A-Park, another Tony Hawk’s staple.

The park editing tool is easy to get to grips with, letting you cycle through different ramps and features and place them on a large flat area until you have something resembling a skatepark.

You can then share your creations with the game’s online community, as well as test the levels others make. The game shows you newly uploaded and the highest-rated levels currently playable, and we’ve already stumbled upon some both quite clever and pleasingly stupid ideas.

As with Super Mario Maker, Dreams and other user-generated games, the long-term success of this mode will depend on how big the playerbase is and whether developer Vicarious Visons can keep it invested, but the early signs are good. If you’re lacking inspiration, Vicarious has volunteered some of its own example levels, such as the ridiculous Roller Coast with its entirely grindable roller coaster, and er, a skateable recreation of Tony Hawk’s face.

Classic split-screen multiplayer is as good here as it ever was, although we did notice a considerable framerate drop from the silky 60fps the PS4 Pro effortlessly maintains in single-player.

You can seemingly play any level in the game from the off, whether unlocked in single-player or not, and choose between a relaxed free skate mode or various competitive formats.

And as THPS is a 2020 game now, there’s also online multiplayer, but it’s pretty bare-bones right now. You select either casual or ranked play, competing in a rotating playlist of score-based modes against people from all over the world in a level the game chooses at random. It doesn’t feel like this portion of the game was given as much attention as the single-player mode, but hopefully Vicarious adds a bit more meat further down the line.

If you have fond memories of playing the early THPS games for countless hours back in the ‘90s, it’s difficult to see how you’d be anything other than head over heels in love with what is one of the most accomplished remakes we’ve ever played.

THPS 1+2 looks and moves like a game in 2020 should, while losing absolutely nothing of what made the originals so fun and vital to skateboarding’s growth as both a sport and a subculture.

It’s unashamedly old-school but somehow manages to feel fresh, and the slightly undercooked online multiplayer features are the only real disappointment.

Well done, Vicarious Visions. Now, not to be greedy, but can we possibly have THPS 3 and 4 too? Pretty please?

All the songs you remember, plus some worthy additions

A few performance issues in split-screen

Now we really want remakes of the next two games