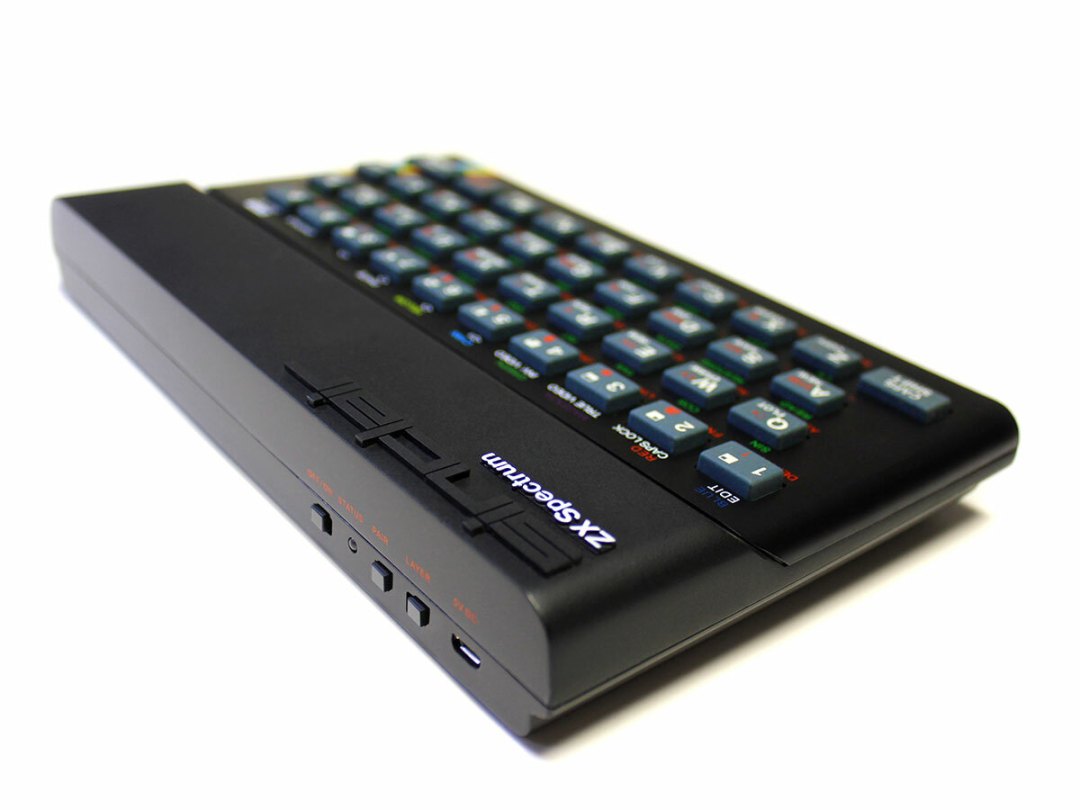 The ZX Spectrum was a curiously British invention.

At the time, Americans were designing computers as massive slabs of plastic, with chunky typewriter keyboards. Ancient Ataris, the Apple II and Commodore’s VIC-20 faced-off, like grizzled, brawny American Football stars, eager to smash each-other’s ports in. Back in Blighty, Sir Clive Sinclair and his merry band of engineers instead embraced the kit-obsessed nature of the British.

The tiny DIY ZX80 was first out of the blocks, soon succeeded by the ZX81, and then the ZX Spectrum. Sinclair’s devices were all physically dwarfed by US rivals, but the ZX Spectrum in particular had much to offer: it was (relatively) cheap; developers claimed it was flexible to work with; and all you needed to play games (which in those days were released on cassette) was a tape deck.

Now, the ZX Spectrum is back. Well, sort of. Elite’s gearing up to release what it dubs ‘The recreated ZX Spectrum’, which, if anything, is at least as bonkers as its rubber-keyed ancestor. It’s a Bluetooth keyboard that happens to look and feel very much like a Spectrum. Like we said: mad.

Those with long memories may fondly remember Elite, then primarily a purveyor of arcade conversions that ambitiously attempted to squeeze complex coin-ops into 48k. Today, the company is still helmed by the same man, Steve Wilcox, although it’s unclear if anyone else is involved.

As he sets up in Stuff HQ’s meeting room, he seems to embody the quiet, slightly eccentric games industry figure of old – the antithesis of the shouty entrepreneur.

He dutifully and briefly runs through a sales pitch on an old laptop, a classic ZX Spectrum unit lurking nearby, before unboxing the ‘recreated’ Spectrum. This isn’t an Apple moment – it arrives without ceremony from the plainest possible brown cardboard box.

However, the resemblance to its forebear is striking. It has the same lines, logo and coloured stripes; the dead-flesh keyboard feels exactly as you’d expect. Only when you look closely do you see the units aren’t identical.

The subtle mottled texture at the top of the original Spectrum is absent, and the font used for the key labels is skinnier. On flipping the unit, you note further changes: the base houses an opening for rechargeable batteries, and the rear dispenses with the original inputs and slots, replacing them with an on/off switch, a pairing status light and button, a ‘layer’ button, and a USB port.

Related › 10 classic coin-ops you have to play right now

Wilcox explains that the ‘layer’ button switches between ‘game mode’ and Bluetooth mode. He proffers that you could use the device as a keyboard for typing emails in Outlook or for playing modern games.

Quite how it would fare is unclear (given that the Spectrum lacks quite a few important keys PCs and Macs tend to rely on), but then it’s really there to play games.

A deft bit of gaming time-travel is achieved via Bluetooth and an Android, iOS or web app (Chromecast and AirPlay are also supported), and we get a chance to play Chuckie Egg on an iPad, rapidly discovering the relative stiffness of a new Spectrum keyboard by repeatedly sending Hen-House Harry to his death. With a bit of imagination, it could be 1983 again.

We rue not wearing fluorescent green socks for the occasion. And Wilcox isn’t blind to the device largely being about revisiting the past: “Spectrum games were designed for use with a physical controller, and try as you might, apps on tablets and phones just don’t give you the same experience. But here you get authentic rubber-key play control over original Spectrum games.”

Chuckie Egg and equally highly regarded classic Manic Miner, we’re told, will be exclusive to the recreated device (in legal form, at least), and the initial app will ship with further titles, with more added during updates. This inevitably leads us to a question about Elite’s troubles in 2014, resulting in the company pulling dozens of iOS retro-gaming apps, allegedly due to not paying some developers.

Wilcox appears contrite and quietly notes a "statement and apology was made at the time,” explaining reparations were being made, and that “we withdrew the apps”.

Any games in the new app will be subject to existing or new licensing deals. Rather more cheerily, Wilcox is hopeful apps will go beyond Elite this time round: “We’ve published a developer guide, for anyone with their own apps they’d like to modify to work with the controller. That could be people who’ve published Spectrum games, or anything else. We’d encourage that.”

So he still has decent relationships with developers, then? “I think that’s for them to decide.”

Yet despite Elite’s successful Kickstarter to fund this device and some other renewed interest in ancient Sinclair hardware (the Vega also aims to resurrect the Speccy, albeit, curiously, without a full keyboard), why should anyone really care about ancient, frequently unforgiving, and often ugly games anyway?

“Well, I think there are a couple of things to bear in mind. First, these games were successful despite having almost no audio and limited graphical content, and so they had to offer challenges and rewards that have really stood the test of time,” argues Wilcox. “The second thing is pure nostalgia. People played these games when they were younger. They have a game memory, if you like. And it’s fun to just come back and revisit that.”

The Recreated ZX Spectrum will be available in Spring 2015.

Related › Sinclair Spectrum Vega is bringing ZXy back to gaming