Sometimes we gamers are an awfully cheap date. Slap a couple of Ewoks and a jetpack in a pre-rendered trailer and our hearts are all aflutter.

Since that fated teaser was released last year, the Star Wars: Battlefront hype train has been a force stronger than we could possibly have imagined. E3 2015 saw journalists clambering over each other to steal a few precious moments with the multiplayer shooter. As each further detail has continued to emerge the internet has tried to maintain its composure and utterly failed. AT-ATs! X-Wings! Controllable Palpatine!

This is the stuff that PR and marketing execs dream of and the waking nightmare of games journalists who must inevitably negotiate the community’s collective crash back to Earth. Battlefront has set expectations stratospherically high but must now face an obstacle course of its own making. It’s time for a reality check.

A long time ago in a galaxy far far away…..

More than any other gaming release this Christmas, Battlefront is selling a fantasy. Mess with Hoth, Endor or Tatooine (yes, I know there were no laser battles on Tatooine, smartass) and you’ll find yourself unceremoniously slung into the belly of the Sarlacc by spurned gamers.

Fortunately DICE won’t find itself walking the plank any time soon. Battlefront delivers a Star Wars experience that is frighteningly authentic. Every audiovisual element is crafted as if under the ever critical gaze of George Lucas himself.

It’s not just the awesome attention to detail that will keep you slackjawed, but the sheer beauty of each creation. Having played almost every major release this holiday season I can safely say that Battlefront is the best looking game of the bunch. The vistas on offer are utterly sublime. Towering AT-ATs survey a landscape teeming with stormtroopers, rebel scum and the odd mechanical wonder.

A lot of love has gone into recreating the universe of Luke, Leia and that creepy dude with a black cape.

Occasionally Battlefront places this sense of spectacle over other concerns like, errm, shooting people.

Most of the game’s smattering of maps are examples of first-rate environmental design, except in the case of Endor, which wants too readily to emulate the scenes we so enjoyed in Return of the Jedi. There’s cinematic magic to behold as troops weave in and out of the endless foliage and sparks burst from bark in all directions, but the map’s jagged ravines and impenetrable greenery makes for a large-scale battle that is often organised chaos. My encounters with the Supremacy game mode, in which capture points must be taken in sequence, were almost always on Endor and almost always left me frustrated.

A rebel facility for all occasions

The other three principal locations – Sullust, Tatooine and Hoth – fare far better, it’s just a shame that there aren’t more of them. Battlefront may deliver nine game modes but these are hosted by just a handful of maps, most of which are consistently re-used again and again.

This isn’t to say that any of the maps (with the exception of my gripes about Endor) are poorly designed. Each environment provides ample opportunities for cover with pleasant variety between linear segments and more open arenas. I’d even say that there’s a degree of technical flair in the balance between aesthetics and mechanics in almost every single one.

With the exception of Walker Assault’s lengthy arenas, no environments are so specialised as to be highly suited to one game mode alone, and this lends a certain similarity of feeling to each one.

The same can be said of Battlefront‘s game modes. Technically there are nine, but that number could easily be reduced to six.

For instance, Drop Zone and Droid Run are slight variations on the same idea – teams must capture objectives across the map in order to claim victory. In Drop Zone those might consist of pods that fall one by one, and in Droid Run three slow moving rustbuckets at once, but the principle is similar.

The same can be said of Heroes vs Villains and Hero Hunt, which are both little more than an excuse to give players up-close and personal time with Battlefront‘s six supercharged characters.

I suspect that the appeal of half of these modes will be short-lived. A few rounds of Hero Hunt was more than enough before the gimmick gave way and I’d had enough.

But someone does deserve a special mention…

There is one clear, outright winner in the contest of game modes within Battlefront and that is Walker Assault.

Not only does the constant movement across the map make the most use of DICE’s sprawling designs, but the alternating objectives for both teams, be that defending activating an uplink or defending a walker, make for a superb balance of straight up shooting and objective based play. You can choose how you want to engage in the fight: whether you’re simply going to sit on a distant peak and snipe to keep the enemy numbers low, or whether you’ll nest yourself in the front lines to hold an objective for as long as possible.

The sense of scale on offer here is never more apparent than with two gargantuan AT-ATs looming over the carnage below. It’s a thrill that you’ll want to come back to again and again, and is without a doubt Battlefront‘s greatest sell.

And someone else is going home empty handed…

Walker Assault might win the title of class clever clogs, but sat at the back wearing an exceedingly large dunce’s hat is Fighter Squadron mode.

It’s another prime example of where the hype surrounding Battlefront begins to bite hard. Many swooned at the idea of a dedicated vehicle mode and what aerial thrills it might entail. What’s been delivered is a single severed limb, cruelly sliced from other game modes that can’t survive by itself.

Fighter Squadron extends the one or two minute stay in an X-Wing featured in Walker Assault over a period of roughly ten minutes and does very little else. The experience was intended as a distracting mini-game to augment the main action on giant battlefields and it should have remained that way. I won’t speculate as to why DICE felt the need to take a minor feature and explode it into a ‘full game mode’ but the result is severely disappointing.

It’s not how the blaster looks, it’s how it makes me feel

Others I’ve spoken to have been equally disappointed with the game’s ‘vanilla’ mechanics and lack of hardcore appeal. On this topic I have only one word to say: tosh.

Battlefront might not be as silky smooth as Black Ops 3, but it’s a well-rounded FPS that handles well. The game’s success as a shooter was always going to work in slight opposition to its success as a Star Wars game: blasters are terribly unsatisfying when compared to conventional weapons and every weapon must be a blaster.

But given the heavy constraints of its well-known universe, Battlefront affords players a varied arsenal that tries its best to lend some individuality to a galaxy of seemingly identical blaster fire.

What I will concede is that in moments where special abilities or power-ups are unavailable, combat can occasionally feel flat. Several times I found myself aching for a thermal imploder to spice things up more often than they were available to me.

In other words, this probably isn’t the game that hardcore FPS fans were looking for, but that’s no great loss. Why not keep things simple? Battlefront is a Star Wars game first and foremost, and that means that accessibility is at the top of its list of priorities.

Your decision to snog, marry, or avoid Battlefront will more likely hang upon your own affection for the franchise it’s based on. If seeing X-wings career through the skies above is sure to induce a warm glow of nostalgia, then this title comes thoroughly recommended. No Star Wars game yet has realised our most treasured science fiction with such aplomb.

The Empire strikes back. Top-form Star Wars and a fine FPS.

You can relax, it’s not a trap

May lack depth for some 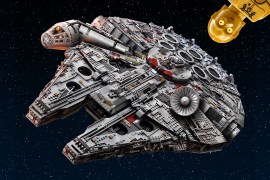