Sony Ericsson is taking a well-earned siesta from amassing its world dominating army of Walkman and Cyber-shot handsets to take a shot at the fashion phone fandango. Its music and camera phones aren’t exactly elephant men, but with its resuscitated T-Series and, in particular, new S-series, Sony Ericsson is really giving its designers carte blanche to get creative.

The first to flounce into view is the EDGE-enabled S500i. It appears Sony Ericsson has gone a bit Midsummer mad (more Shakespeare than Murders, mind) and taken nature and all things woodland for inspiration.

This mid-range slider arrives in Spring Yellow and Mysterious Green finishes and, judging by the colour schemes, themes and light show, is destined for a home in a lady’s clutch bag. Our Mysterious Green review sample gleams like Blackpool Illuminations, sporting side bar reflectors that, with the centre navigation buttons, glow and pulsate emerald green every time the slider is opened.

Sony Ericsson would be foolish to rely on this light show and floral themes to seduce the female fraternity because the handset design is a little humdrum compared to more delectable rivals like the LG Chocolate, LG Shine and Samsung E900. Granted, the chassis is very lightweight, but it creaks and isn’t very robust.

However, the spring assisted slider action is sprightly enough and the S500i has been sprinkled with Sony Ericsson’s renowned and faultless user-friendliness.

Sony Ericsson has also kept the 2MP lens au naturelle, leaving off autofocus, macro focus for closes up and any type of flash. It shoots in a 1600×1200 pixel resolution and you still get to tinker with white balance settings, effects and shoot modes. For a simple point and shoot scenario the S500i copes well, with strong colour rendering and some good detail, although it can lose focus around the edges.

The built-in music player is Sony Ericsson’s standard issue non-Walkman variety (as seen in the K810i) and it remains an accomplished operator. The intuitive Walkman Disc2phone desktop software is bundled to transfer your CDs and digital music library over to the phone and the music player throws up a five-setting equalizer to ramp up the audio.

Music sounds surprisingly vibrant with the boxed earphones and all your tuneage and multimedia gubbins can be stored on the top located hotswappable MemoryStick Micro slot.

Despite the Mother Earth influence and light display, the S500i is still missing that X-factor design gene rooted in the touch-sensitive LG Chocolate and Samsung E900 and the metallic-armoured LG Shine. Sony Ericsson clearly needs more practice at this fashion phone thang.

Feel the beat, not the pinch 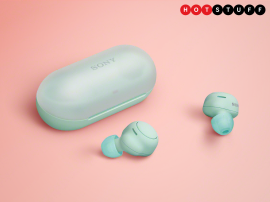 This ain’t your grandaddy’s candle 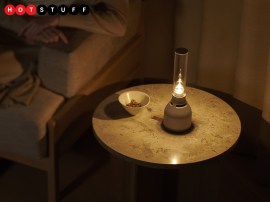