If you think tech reviewers live in gadget-packed homes and do very little real work while hi-tech gizmos serve them, you’re not entirely wrong. When testing the Samsung NaviBot CornerClean robot we spread talc on the floor then sat on the sofa with its remote control, watching it tidy up our intentionally created mess. We’re not proud to say we also occasionally threw popcorn in its path, but it was all in the name of testing. With its much-hyped cleaning and navigation abilities, could the new NaviBot be the robo vacuum to beat all other robo vacuums? And does it signal a new era of robot-enabled laziness for us fleshy meatbags?

The robot with hairy arms

The slim (8cm) NaviBot CornerClean sits discretely on its charging base without imposing into the room. But fire it up and you see its unique new feature: a pair of pop-out arms at the front, each with three rotating brushes. That’s right, this mechanical servant has hairy arms. They’re designed for cleaning into corners, but in fact get constant use, sweeping dirt into the middle to be sucked up.

We tested the brushes’ abilities by idly flinging popcorn into the NaviBot’s path. It snapped them up as eagerly as a toddler at the Saturday morning pictures. Impressive. Less impressive was how scrappy the brushes looked after a small amount of use – they’re going to need frequent cleaning and replacement.

In the powder room

Next we put cleaning abilities to test by sprinkling talc on the floor until it was as slippery as a Northern Soul dancefloor. The ‘bot found it very quickly. Rather than bumbling around the room for half an hour, NaviBot methodically vacuumed back and forth in parallel lines, getting it fairly clean within 5-10 minutes – a big improvement on the more random approach of the iRobot Roomba range.

But we did say “fairly clean”. Results weren’t amazing – you could see where the brushes had swept up a fair amount, but much of the powder remained. Suction-wise it can’t compete with the dust-eating power of a mains-powered vacuum, or even one of the better rechargeable stick cleaners. The Northern Soul night was go!

The NaviBot has a ceiling-facing camera that allegedly maps your room to aid navigation. We saw no evidence of this; it just seemed to clean back and forth methodically, its direction based less on room shape, more on which way it was pointing when it started.

But more important is its hazard detection. This ‘bot has the spirit of a cheeky puppy. If it comes up against a minor hazard it uses brute force to budge it out of the way, while major hazards are either detected and avoided or grumpily headbutted before it admits defeat. In the dining room it looked like a poltergeist was visiting as NaviBot cleaned underneath, bumping chair legs with enough force to move the furniture around.

One place you don’t want your pricey robotic helper to be wilful is the top of the stairs. So it was with trepidation that we tested its cliff sensors, designed to stop it falling off steps and suchlike. Our fear was misplaced: it stopped perfectly at the stair top and turned around. Even in manual mode, using the remote control to direct it over the top stair (into us, poised, just in case) it refused, rolled back 1cm from the edge and awaited instructions that didn’t contravene its non-suicide directive. That said, as with other robo-vacs the Navibot can’t actually clean the stairs, or even climb them to clean another floor.

NaviBot comes with two battery-powered Virtual Guard gizmos that use an infra-red beam to fence off no-go areas. We used one to good effect keeping the cat’s bowls protected. The one time we forgot to switch it on, NaviBot rolled neatly up the slope of the food bowl and into the water bowl, giving itself a wheel wash.

It’s on the ball

The aforementioned manual mode lets you control your ‘bot’s precise movements. A tedious way to clean the house, but ideal for navigating it out of trouble if it gets stuck in a tight spot. We tried shouting “you got in there, so you can bloody well get back out again!” across the room, but it just plaintively beeped. The mode also proved excellent for playing footie – NaviBot loves knocking smaller obstacles out of the way, so it enjoyed a good kick around.

More useful is the timer, where you use the remote to preset the times and days of the week you’d like NaviBot to automatically clean. This is simple to set and vacuuming is quiet enough that you could easily have your robo helper clean in the early hours without disturbing a soul.

The NaviBot CornerClean is the best robotic vacuum we’ve tested. Impressive features and it needs virtually no setup. It can’t clean stairs and its cleaning power can’t compete with a mains-powered vacuum or even the better rechargeable stick cleaners, so as with its robo-rivals the Navibot is more of a helping hand than a complete replacement for hands-on, grime-busting action. Still, if you live in an uncluttered flat with hard floors, it could be your new best friend. Hell, it will even play footie with you.

It’s not a total replacement for a traditional vac, but the Navibot is the best robo-cleaner yet

So slim it often fits under furniture

Doesn’t clean as well as a mains vacuum

eufy RoboVac: the smarter way to keep your home clean

From low-flying robo-vacs to hi-tech handhelds, these ace eufy devices make it easy to keep dust and pet hair at bay 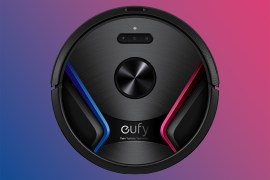 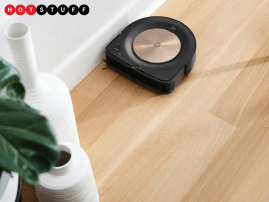