We’ve seen many a budget DVD recorder, and most of them aren’t a pretty sight. LG and Alba have both released models under £100, and we wouldn’t really recommend either as bargains – they’re just too flawed.

The Samsung DVD-R150, though, is much more promising. It’s a little more expensive at £130, but out of the box feels exceptionally well built and has slick and responsive controls.

Most appealing, though, is its ease of use. You’ll only be recording one of five channels through the Samsung’s analogue tuner, but at least there’s no degradation of the broadcast signal with any of its four recording modes.

You can record to DVD-R/-RW, DVD-RAM and DVD+R/+RW and the connections are, as you’d expect, not exactly cutting edge: two Scarts and an S-Video socket sit alongside a set of component video outputs.

Off-air performance is impressively stable and solid – there are traces of noise and grain, but it’s noticeably better than other budget offerings we’ve looked at. As a straight DVD playback machine, contrast and colours avoid the gaudiness of some other budget players and fast-motion is handled well, which is good news for sports fans.

There are some visible picture flaws and at times the DVD-R150 suffers from dot crawl, but it’s far from unbearable. If you can prise your wallet open a little more we’d recommend auditioning Panasonic’s DMR-EZ27, but otherwise this is a decent recorder for the money.

Compact system cameras supertest: Which mirrorless cam should you buy?

There’s never been a better time to ditch the bulk of a DSLR and go mirrorless. But which is the best? 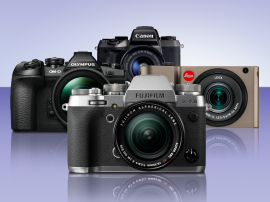