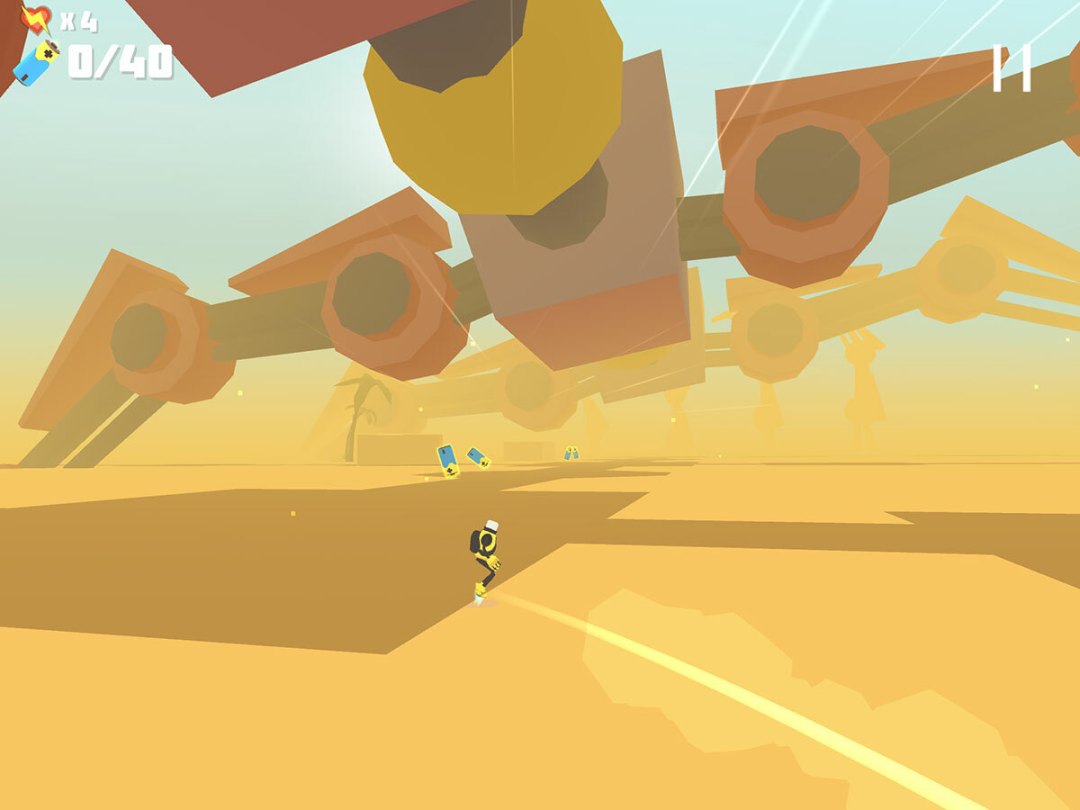 We’re not sure what’s gone on in the world of Power Hover, but it’s nothing good.

Human society has vanished, leaving a desolate planet of robots and things designed to smash robots. The second of those is a big problem for your particular robot, aiming to save its village from darkness after a metal bandit stole the batteries that power everything.

As is law in arcade games, the thieving git leaves a trail of goodies for you to collect. And as with many mobile titles, it also initially seems simple and throwaway. The game appears to be yet another runner, albeit one where you’re on a hoverboard, and so swoop left and right across the landscape. There are jumps to leap and rails to grind, but that’s all done automatically.

Quickly, though, Power Hover grabs hold and never lets go. The visuals wow — all-the-rage low-poly designs whizzing past as you grapple with the hoverboard and try not to slam into a wall. The floaty, dreamlike controls initially frustrate, until you realise they’re unique by design. Their frictionless nature (rather than you turning on a dime) means you must get used to how the board handles. Everything boils down to ‘left’ and ‘right’, but precisely when you change direction is key to success.

What a wonderful world

But it’s the world itself that propels Power Hover from nice curio to must-have install. There’s nothing so clunky as a story — you merely glimpse snatches of what might have been, getting a sense of the strange world through what you see. There are deserts infested with giant sandworms, and huge expanses of water peppered with mines. A dead, grey city exists in stark contrast to sun-drenched landscapes populated by colossal spider-like drilling apparatus, spiked legs determined to stab an inconvenient hole in your droid.

Power Hover‘s level-based structure is perhaps its smartest move, though. In a gaming ecosystem awash with procedurally generated fare, having something concrete today becomes a differentiator. Each level can be learned, enabling you to perfect your route and snag more batteries; and as you progress to tougher challenges, often in pursuit of the thieving android, you discover how clever some of the optimum routes are, and how difficult it will be to ace them, even when every turn and obstacle is committed to memory.

The only real question about Power Hover is its brevity. Assuming you can best the tough boss levels (in effect, tunnels that spew robot hell in your general direction) and a few seriously tricky levels late on, your journey will last a matter of hours. But as you carve yet another sweeping path along the terrain, you experience an elegance that evokes a stripped-back mobile-oriented Journey. And during the more frenetic moments, Power Hover resembles the hard-as-nails Boson X.

Those are good titles to bring to mind, but Power Hover is also very much its own beast — and one that never tires of shaking things up, or sending yet another dazzling set-piece your way, despite being ‘just a mobile runner’. So if you fancy playing something with a certain familiarity but also the capacity to surprise and delight, immerse yourself in Power Hover‘s strange world immediately.

Power Hover is available for iOS from the App Store. Update: the app arrived for Android (from Google Play) on 9 Feb, 2016, and the game on both platforms has since received content updates.

Looks gorgeous and the soundtrack is superb

Challenging but not overbearing

Keeps shaking things up as you progress

The controls take some getting used to