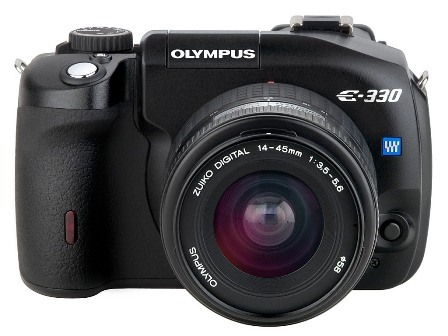 This is officially the first DSLR camera that can perform the most basic compact-camera function – producing a live image on its pop-out LCD screen. The optical viewfinder is the preferable choice, but if you’re moving up in the camera world, it’ll suit you until you get used to setting up shots through the smaller ‘finder.

Eye-candy certainly isn’t a word you’d associate with the E-330, but we’ve fallen for it in a big way. We don’t mind the more challenging looks of Gerard Depardieu compared to the obvious qualities of Brad Pitt. The fallout shelter build and magnificent array of lenses, too, are good points but the most staggering part is the image quality. Pictures are well detailed with sharp edges, and colours are vivid and realistic, even if the price tag is a bit steep.

Olympus is one of those brands that’s fondly thought of among photography enthusiasts, like Farley’s Rusks and Big Trak. Loads of snappers start