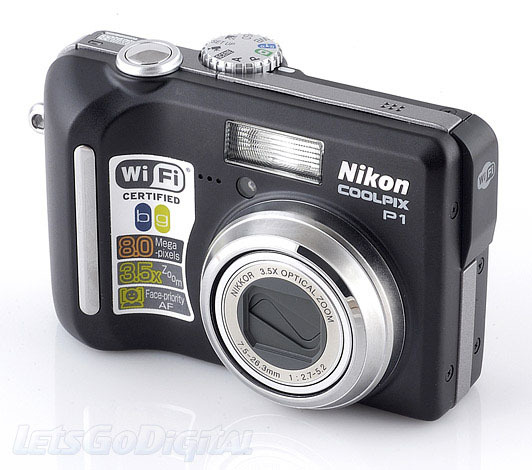 USB cables are the 21st-century equivalent of coat hangers: turn your back for a minute and the damn things breed like rabbits.

The Nikon P1 promised to cut through our cable-related confusion, packing a full-power Wi-Fi system that could beam its 8-megapixel images direct to our printer and PC. So could we finally bin our trippy-up, ever-tangled, socket-hogging cables, or were there strings attached?

A scarcely noticeable bump on the right-hand top corner of the P1 houses the 802.11b/g Wi-Fi antenna, which flashes blue when transmitting. Range to our router faded at about 10m, after two thick walls. You’ll soon be able to send your snaps directly to (almost) any photo printer, without involving your PC at all, using a plug-in USB Wireless Printer dongle that costs around £50.

The VGA-quality movies are large enough to watch on TV, although we weren’t keen on the reddish vertical smears that appeared whenever conditions got too bright. But the 30fps clips are smooth enough, and the Nikon positively laps up shots in dim or artificial light.

For a compact camera, 8-megapixels is a lot of resolution, especially when it uses a small 1/1.8-inch sensor. Squeezing so many pixels onto a tiny chip can make for ugly, noisy images in the dark. Luckily, there are few such problems with the P1: its photos are punchy, sharp and full of life. Avoid the maximum ISO 400 sensitivity, though.

Griping about large LCDs is like whinging about having too much chocolate ice-cream, but some cameras focus on size at the expense of quality. Not the P1. Its 2.5-inch display is crisp and colourful in bright sunlight and handles dim, smoky rooms with ease, although it does go a bit grainy. We loved the menus, too: you can choose between clear text or one-click icons for access to advanced features.

There are plenty of creative features inside the P1. Aperture-priority mode lets you tinker with exposure settings and many of the 16 scene programs come with extra digital effects to tweak sharpness or colour. Hi-tech features include a useful D-Lighting setting to boost contrast in images after they’ve been shot.

Not everything was just peachy, though. Setting up any Wi-Fi device can be a chore and the P1 is no exception. And even once you’ve domesticated it for use at home, the camera can’t currently use any of the thousands of public hotspots to upload snaps while you’re out and about.

Despite all that technical wizardry inside it’s not going to win any design gongs: the boxy, matt black housing manages the neat trick of looking like cheap plastic while actually being made of tough metal alloy. Although the P1 is pretty responsive (especially the lightning-fast 3x zoom lens), its lightweight plastic controls don’t inspire much confidence, either.

Having had a moan we can’t resist getting back to the P1’s good points. You won’t get much better (or bigger) images than this from a compact camera. The P1 masters its massive 8-megapixel resolution, delivering rich, accurate colours and fine print detail.

Icon-driven menus and a help button smooth off the edges but getting the P1 to work with a typical home Wi-Fi system requires patience. The paper instruction book is excellent, though.

Basically, a high-quality compact camera with Wi-Fi functionality stuck on. Printing and streaming images to your PC at home has never been easier but you’re stuck with memory cards outside.