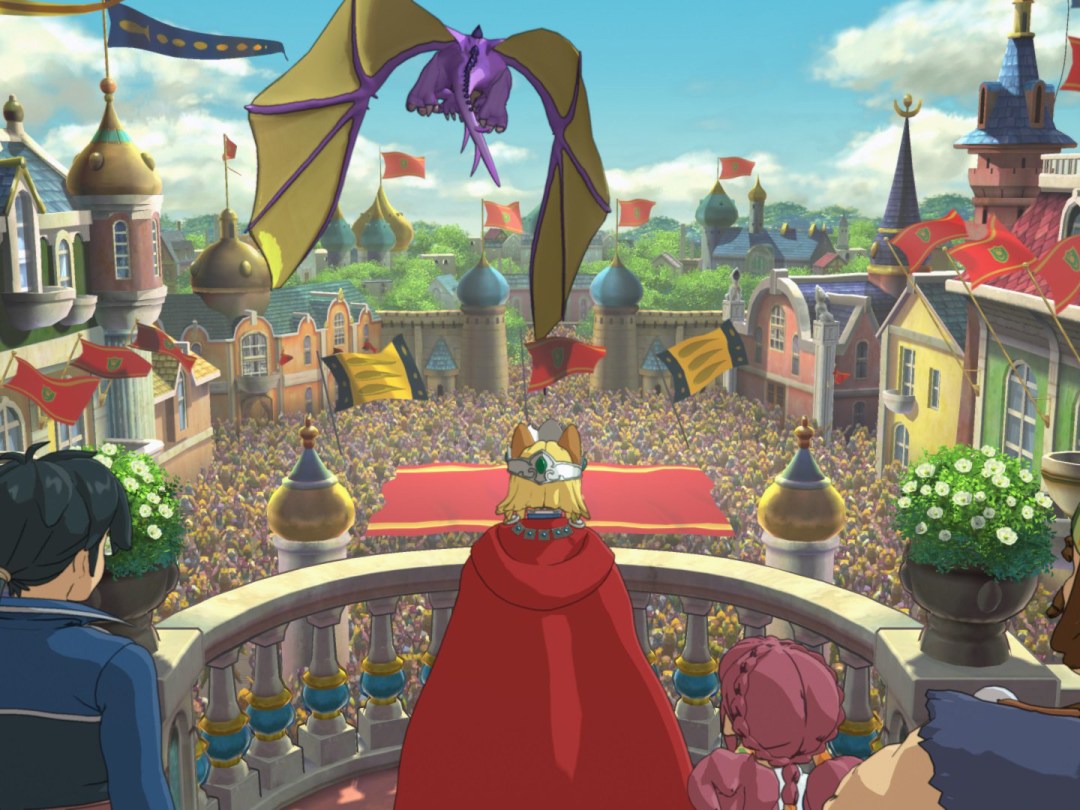 Imagine being kicked out of your home by your own dinner.

While the likelihood of a roast chicken springing to life and leading a mutiny against you is thankfully slim, Ni No Kuni‘s protagonist Evan – a descendant of cat royalty – is embarrassingly usurped as king of Ding Dong Dell by a band of rebel rats.

Most video game plots would then see you formulate a revenge plan, but in this JRPG adventure you’re instead tasked with building a new kingdom and achieving world peace. Don’t worry, though – this no boring tale of diplomacy.

With a fantastical world full of wacky characters, a revamped combat system and an abundance of new features, Revenant Kingdom is aiming to displace its wonderful predecessor as the new king of JRPGs. But is this a feat too great for young Evan and his motley crew?

World peace – as we all know – is no easy feat. Still, Evan is determined to complete this quest as he travels the world to get every kingdom’s leader to sign up to a peace treaty. Yes, that even includes the evil blighter who usurped you.

This is a refreshing change from the typical hot-headed heroes found in most JRPGs. Of course, there’s still many monsters to kill and kingdoms to save, as a mysterious villain keeps stealing control of powerful beasts called Kingmakers and wreaking havoc on the realm.

While the story is enjoyable, it doesn’t quite live up to the grand adventure or emotional resonance of its predecessor. The absence of the world-class Japanese animation studio Studio Ghibli is very noticeable – not just in terms of storytelling, but also because of the lack of stunning anime-esque cutscenes that we saw in the original, Ni No Kuni: Wrath of the White Witch.

Revenant Kingdom is successful at recapturing its predecessor’s wacky and loveable charm though. Almost every character you meet has a unique quirk, while every kingdom you visit feels completely different to the next with its own colourful sub-plot. One of my favourites include the ongoings at the canine-controlled kingdom Goldpaw, where every government decision – including the increase of taxes – is determined by a dice roll. Sounds bonkers, but even this is less chaotic than Brexit.

The world of Ni No Kuni has clearly cracked down on animal cruelty laws, as Revenant Kingdom ditches the Pokemon-styled combat in favour of a more traditional real-time system.

When confronted by a monster, Evan and his party will jump into an enclosed arena and duke it out with their weapons, magic spells and army of higgledies. These Pikmin-esque creatures provide various power-ups and attacks during battle. Collecting ones that can give you health boosts or are capable of dealing devastating damage on enemies can be hugely beneficial.

Overall, this revamped combat is a big upgrade on the one found in the previous game. It’s not without its flaws though. Fights are rarely well-weighted. If enemies are a couple of levels below you, a couple slashes of the sword or one flaming tornado spell will quickly put an end to those fiends. Even the boss battles rarely troubled me, especially since the game highlights their weakness.

But if you go looking for a challenge and come across grunts that are 10 levels higher, they’re capable of dispatching you in a couple of shots. Avoiding their hits is tough too, as the battle arenas are fairly small. On numerous occasions I was killed because I had rolled straight into an invisible wall. I feel that most fights come down to your preparation, gear and level. Skill has little to do with the outcome on the most part. It’s a good job, then, that the upgrade system is amongst the best I’ve ever seen in a RPG.

“We built this city!”

Most levelling-up systems in RPGs feel ridiculously artificial. If we truly gained XP points every time we cooked a meal, we’d all be opening Michelin-starred restaurants by now. Japanese developer Level-5 has pulled off a masterstroke with Revenant Kingdom in this regard though, creating a progression system that ties in with the story, offers incredible depth and gives the player a huge incentive to undergo side quests.

By putting you in charge of a new kingdom, you can build the likes of a weapon workshop, spellwork and higglery. These give you access to more powerful swords, magic spells and higgledies, which will all give you a significant boost in combat. Or you can build farms and markets that gather useful resources for you.

The catch? You need to persuade other characters to join your kingdom in order to build and operate these facilities. You can do this by completing side missions, which usually involve defeating a particularly nasty beasty or giving them a specific item. Recruit enough people and you’ll soon see your settlement grow from a small town into a bustling city that would even give Game of Thrones‘ King’s Landing a run for its money.

I can’t tell you how rewarding and addictive this process is. It’s like a miniature Clash of Clans has been seamlessly sewn into the heart of a traditional JRPG and made every other feature in the game better for it. Plus, it’s really heartwarming to see outcast civilians become vital members of your kingdom’s community.

So bountiful is the content in Revenant Kingdom, that it often feels like multiple games have been bundled into one. You’ve got your typical JRPG with the combat, one of those addictive PC strategy games with the progression system and then there’s skirmishes.

In what feels like a simplified version of Dynasty Warriors, you can take part in battles where you assume leadership of four small armies. Each platoon has a specific weapon type ranging from swords, hammers, spears and bows, which use a rock-paper-scissors system. The aim of the game is defeat all of the enemy troops and take over their bases. This mode is too simple to be a whole game in itself, but as a mostly optional side-activity, it’s a welcome respite to the normal combat.

There are many other things to do in Revenant Kingdom too, such as beating especially powerful monsters, completing dungeon-esque labyrinths and expanding your kingdom. Do absolutely everything the game has to offer, and you’re easily looking at 100-hours worth of content.

So has Revenant Kingdom usurped Wrath of the White Witch as the new king of JRPGs? Personally, I don’t think so.

While developer Level-5 has to be applauded for taking risks by overhauling the combat system and introducing the absolutely fantastic kingdom-building feature, it hasn’t quite hit the heights of its predecessor. The loss of Studio Ghibli as a collaborator has been a big blow, but underwhelming boss battles and an inconsistent difficulty level doesn’t help either.

That said, Revenant Kingdom is still a great game. There’s plenty here for fans of the orginal to have hours of unrelenting entertainment. It’s not for everyone, but if you’ve a sweet tooth for the adorable and wacky, you’re going to fall madly in love with the world of Ni No Kuni.

Not quite the new king of JRPGs, but this charming tale is great fun nevertheless

The kingdom-building system is incredibly addictive and hugely rewarding