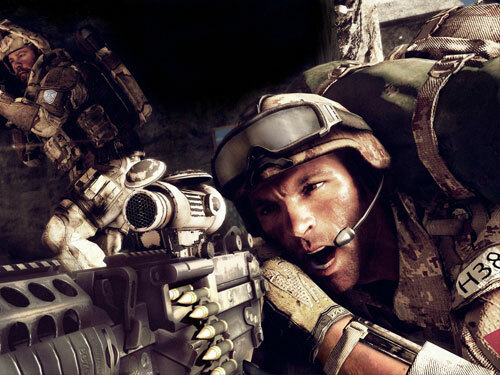 It’s time for the annual first-person shooter shoot-out as the game makers at Electronic Arts try yet again to go head-to-head with the gaming superpower that is Call of Duty. This year they’ve married the tech that powered Battlefield 3 with the attention to military detail of Medal of Honor to create Medal of Honor: Warfighte,r but does the result have enough firepower to outmaneuver Black Ops 2?

Usually this is where we’d tell you all about the scenario, but Warfighter’s got a story that’s as ill-explained as it is ropey. It’s got some personality-free soldiers racking up the air miles while fighting Islamist terrorists around the world, mixed up with a family drama straight out of a daytime telly soap. Oh, and more switching back and forth in time than a Doctor Who box set. We weren’t expecting Shakespeare but having some idea why we’re spraying everything in sight with bullets would have been nice.

Medal of Honor vs Call of Duty

Once the story stops and you’re let lose with a gun things improve… but only marginally. The guns feel good and the peeking out of cover works very well, but elsewhere Warfighter’s aim is wide. The game clearly aspires to match Call of Duty but while Activision’s bombastic series keeps its action nippy, Warfighter plods, marred by paint-by-numbers gunfights, hunts for the invisible magic spots that trigger the next bit of action and a door-opening mini-game in which you choose whether to kick in the door or whip out an axe and do your best impression of Jack Nicholson in The Shining – this isn’t exactly envelope-pushing stuff.

The single player mode might be a dud but the meat of modern military shooters is online. So what does Warfighter have in its multiplayer kit bag? It’s got the familiar choices of deathmatch, capture the flag and a version of Battlefield’s popular Rush mode, plus plenty of gun customization options, but the game does also have some tricks of its own. One is a tough-as-nails variant on capture the flag called Home Run, which ditches respawns to create tense life-or-death struggles within claustrophobia- inducing maps.

Another of Warfighter’s multiplayer tricks is the Fireteam system that applies to all of its online game modes. Fireteam pairs up players during matches as in-game buddies and awards extra perks for those who do work together as well as letting them respawn next to each other. It’s a great and well-executed feature that pushes players to work as a team, which is exactly what should happen in a military shooter.

Warfighter is also hooked up to Battlefield 3’s Battlelog system, an in-game social network that tells the world about your latest kill streaks while keeping you posted about who’s online and what they’re up to in the Medal of Honor world. And since players also pick which country their online soldier is from, the game uses individual players’ data to create a league table of nations based on how people playing characters from that country are performing in its multiplayer warzones.

Medal of Honor: Warfighter’s single-player mode drops the ball so badly that it threatens to overshadow the clever buddy system and tense Home Run mode that enliven its otherwise predictable selection of multiplayer options. But while these features deserve acclaim, neither one is strong enough to make Warfighter the Call of Duty beater it so badly wants to be.