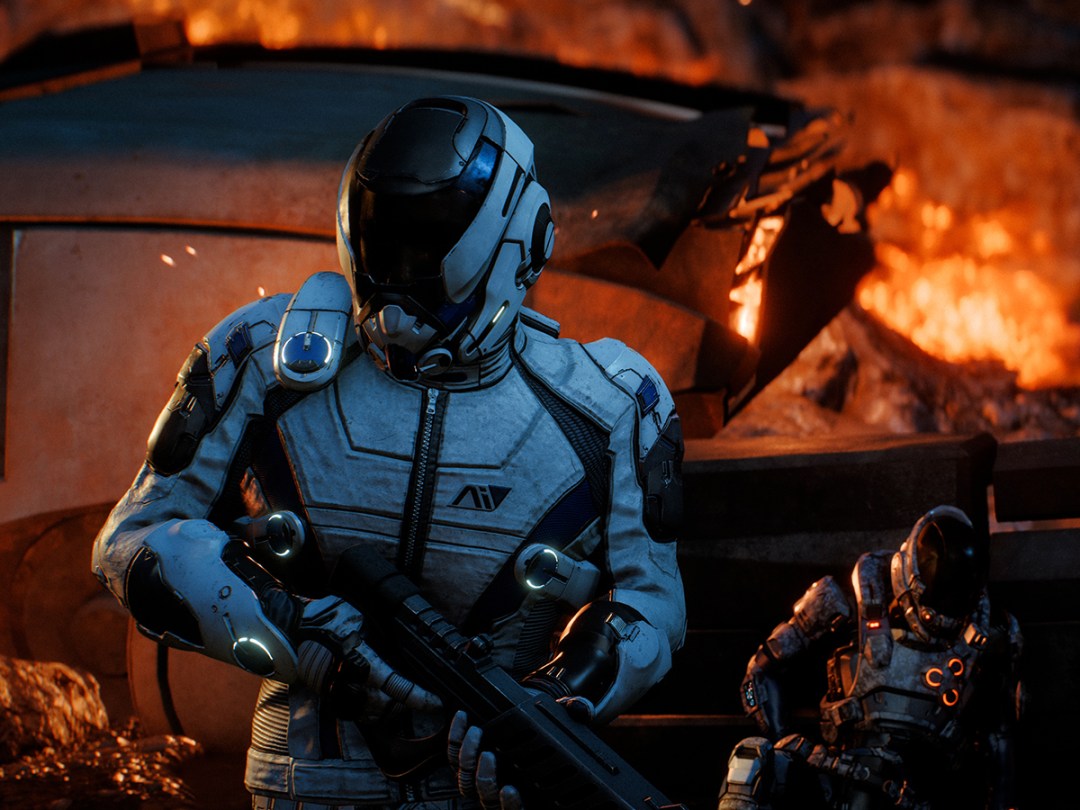 How do you follow what was arguably one of the finest gaming trilogies of the last decade? The answer, if you’re BioWare, appears to be “to do more of the same – only bigger”.

Is that enough, though?

Mass Effect: Andromeda is a game that comes with a lot of baggage. When I think of ME, I think of an epic struggle against almost insurmountable odds, full of rich emotional beats and satisfying narrative decisions (ignoring, for now, the infamous ‘three colours’ anticlimax), that filled up my gaming hours and made me understand that love between a human and a Turian is not only normal – it’s very, very special.

With a background like that, how does Mass Effect: Andromeda stack up? In pure scale it’s bigger than the three titles that went before it but, as it has no sequels planned, is also effectively a standalone game that will find itself measured against the depth and growth of a series that had three games with which to find its voice. That seems a tall order.

And yet, it stands up – but not without a few knocks along the way.

Allow me to explain (without spoilers)…

As you’re almost certainly already aware, Andromeda stands apart from the previous games in the Mass Effect series in that it occurs in a completely different galaxy.

At some point between the second and third games in the original series, humanity banded together with the other alien races of the Milky Way and sent a fleet of ships on a mission to find a new home in the Andromeda galaxy.

600 years later, this rag-tag band (read: thousands of beings from a number of species) finds itself in the Heleus Cluster, where the glorious future of the ‘Golden Worlds’ (planets perfect for colonisation) awaits.

As you’ve probably predicted, the worlds turn out to be anything but golden – and the cluster actually turns out to be the new home of the biggest, most evil form of candy floss ever. This ‘scourge’ does exceptionally nasty things, such as damage ships, mess with the whole ‘being alive’ thing, and take the last Rolo without even a hint of apology.

In your role as offspring-of-a-galactic-figurehead, you spearhead the reclaiming of these blasted worlds through a series of missions, each aimed at improving the chances of an outpost surviving. For example, you might have to restore peaceful relations with the Krogan, or deal with exiles – those who have left the initiative to create their own border town.

One of the most important tasks you can undertake is the exploration of the Remnant Vaults. These alien tech systems are found on planets and are incredibly destructive. They need to be discovered and investigated in order to progress both the story and the chance of outpost survival.

Bioware has done a great job of making each vault interaction a joy. These could’ve so easily been cookie-cutter experiences, but instead you get variations on a theme, which keeps things fresh – and you on your toes.

Pure anticipation › 5 reasons to be excited about Mass Effect: Andromeda

To assist you in your galactic endeavour you have your ship, the Tempest, and your ride, the Nomad.

The Tempest is a lovely craft, distinctly reminiscent of the original series’ Normandy in design, but better laid out internally. The Nomad, though, is the real star, particularly when it comes to racing across sand dunes or sliding across ice like an intergalactic Colin McRae.

Far less helpful are the Kett, a race of bone-friendly aliens that have had access to the cluster for a while now and have their own plans for the vaults. It’s your interactions with them, along with the settling of the worlds, that acts as the main spine of the story.

This feels like as good a time as any to admit that a single review can’t do Andromeda justice. With a purported non-player character cast of roughly 1200, you can walk around, talk to and interact with so many people and things that it becomes somewhat bewildering.

The original trilogy, complete with side missions, is a drop in the ocean compared to the range of missions available in Andromeda. Sure, you could knuckle down and smash through it, but there is so much to see, to do, and to explore that if you don’t savour it, follow the side quests and interact with the locals, you’re doing yourself – and the game – a disservice.

But there is something we need to discuss…

When I play a Mass Effect game, four things usually pull me in. The first is the decisions I make in interactions and combat. The second is the narrative: how the story unfolds and how well that is written. The third is the voice acting, and the subtlety of the delivery – the emotional beats and warmth that help define characters. The last is the graphical character model and its relationship to the voice acting.

Mass Effect: Andromeda has some of the worst character models I’ve seen in recent years. The human facial animations are a mixed bag between ‘acceptable’ and ‘I cannot believe this has made it into the final game’. It’s more than a little disconcerting when, in trying to have a conversation with an NPC, your character looks as though they’ve just relieved themself.

For a game with the goal of total immersion in a sci-fi fantasy, it’s a big issue. Thankfully, the more you play the less important it becomes, as the voice acting and story get to the point of overcoming the animation issues and selling you on the characters as a whole, but it’s not unreasonable for people to complain about the immovable, dead-eyed faces that BioWare has given us here.

There’s more to characters than faces, of course, but Andromeda falls down here, too. I’m not sure about you, but my hands tend not to clip through my skin and into my internal organs, and yet that’s exactly what happens to almost every character in almost every conversation scene.

Games are about suspension of disbelief. We agree to engage in the illusion, and when it’s broken through poor delivery (Fallout‘s rotating heads; Assassin’s Creed‘s eyeball face), the victim is immersion. It’s not just arms, either: the mapping of clothing to frames is generally done with too few points, so you see patches of model breaking through the clothing. And it takes time to overcome that – time that could be spent becoming more invested in the Ryder storyline and the future of all the races in the Heleus Cluster.

We’ve seen all of this before in too many games to name, but the fact that it happens here and with such regularity reeks of a lack of attention to detail that you’d have thought BioWare was above.

That being said, these are very rough spots on an otherwise impeccable visage. The graphics as a whole are stunning. Absolutely breathtaking, in fact. Both the in-game graphics and the cut-scenes deliver. So, too, does the level-design. Yes, there are waist-high obstacles everywhere, as well as ammo and health spots, but it’s testament to the world-building that you don’t immediately recognise these things as indicators of an imminent firefight, but just accept them as entirely convincing bits of furniture of the world.

Combat is highly enjoyable, too, with an organic cover system in place, as well as an intelligent AI system that makes your squad more aggressive and therefore more useful.

A new jump mechanic throws something new into the mix, allowing you to seek out different forms of cover – which is now destructible – as well as bringing a novel dimension into levels, where advancing might mean hopping onto a ledge or boosting across a crevice.

As a result of this, the flow of the conversations was better signposted. It lead to far more enjoyable interactions, which is a very strong plus in comparison to the original trilogy where that wasn’t always the case.

Indeed, I’m fairly certain that the more I played, the more the ‘off book’ conversations I had with my squad (the conversations while driving the Nomad, for example) reflected in my conscious language choices. There was something delightful in hearing Ryder goof off and wondering if that was a result of the decisions I’d made.

The companions you pick up along the way who become part of your team are delightful, too. If you’ve come from the original trilogy and think you have a handle on the various race/character archetypes, Andromeda has fun mixing it up.

Mass Effect: Andromeda, then, despite its flaws, is a must-buy.

This a vast game, with a vast tapestry of play on the cards and, indeed, a vast potential for character development – all delivered in a way that properly pulls you in. In fact, the more you play, the more you’ll never want to stop.

Yes, those graphical bugs break the illusion and are a frustrating presence in a package that’s otherwise completely immersive, but I feel that the rest of the game does enough to make up for and ultimately overcome those.

This is a brilliant game as it is and, if BioWare fixes the facial animations and NPC physics, Andromeda will be topping many game of the year lists – and sitting pretty in ‘top 5s’ for years to come.

And, if it never gets that patch, we’ll complain and moan about it but ultimately still love the game – because a flawed Mass Effect game is still an amazing game.

The glitchiest Mass Effect to date, but also the biggest, most beautiful and most action-packed – and in the end those are the things that you’ll remember

Myriad things to do and explore

Can be overwhelming at the start

UI can be glitchy at times