Android isn’t an elitist system. But it still has a pure-breed strain. We’re talking about the Nexus family, the official ambassadors of Google’s mobile republic. Phones like the Nexus 6P aren’t made in Google labs by Google robots, though.

The Nexus 6P is made by Huawei, which has clawed its way up from making budget phones, often for other companies, to produce this. And it is one of the lead Android phones, regardless of brand.

After the Nexus 6, which not everyone loves, the Nexus 6P sees the series get back on track. Starting at £449 it’s a bit cheaper than the ‘intended’ prices of the other flagships, and really aces a lot of phone side attractions as well as the main events, like the speakers, battery, fingerprint scanner and selfie camera.

It’s one of the best all-round phones money can buy.

Huawei used to make pretty awkward-looking phones. Like a teenage boy trying to grow out his hair, there were some questionable moments in its design history. Before it starting coming up with stunners like the Mate S. The Nexus 6P is perhaps not quite as much a beauty as that phone, but it’s certainly smart-looking.

The Nexus 6P has a slim aluminium body and ours features a dark grey finish that takes the edge off the often-sparkly look of anodised aluminium. There’s a little raised lip at the top, a phone-wide bar covered by glass that makes the 6P appear a bit less of a stunner than something like the Samsung Galaxy S6 Edge. However, we’ll take it. It lets the rest of the body stay a trim 7.3mm thick.

Phones don’t get points just for being slim, but a giant-screen phone like this needs to lose bulk wherever it can. One of the big problems with the original Nexus 6 is that the thing just feels huge.

By slimming down the frame and reducing the screen size a bit, the Nexus 6P is far more manageable. I found its size makes both hands gravitate towards the screen rather than just the one, but it’s not the thumb workout the Nexus 6 is. It’s more a Samsung Galaxy Note 5-a-like. You’ll need to treat it pretty nice, though. After accidentally keeping it in a pocket with my keys for about 45 seconds, it had already scraped off some of the outer dark finish. Oops.

This is just the nature of dark-coloured aluminium devices, though. So if you don’t fancy treating your Nexus 6P like a newborn you might want to consider the lighter silver and Frost white versions. All three look great.

Back to the good stuff: Huawei has handily bunged all the on-body buttons on the side, right where your thumb lands naturally, and the rear fingerprint scanner gives plenty of room for the front-facing stereo speakers. It’s a pretty successful case of phone Tetris.

While the finger scanner is part of the new Nexus Imprint team, it actually feels just like the one on the Huawei Mate S. It’s fast, it’s accurate and it works even when the phone screen is off.

Good fingerprint scanners have gone from being a rarity to the norm among top-end phones, but this is among the best. It seems to be able to deal with wet fingers far better than most too. Being on the back, the Nexus 6P wants you to use your index finger rather than your thumb. But you can train the little guy to recognise up to five fingers. Just like other finger scanner phones, then.

The speakers are just as worth noticing. The Nexus 6P has two front-facing speakers for a proper stereo effect while you play a game or watch a bit of Netflix. It’s a decent-sounding duo.

I put the Nexus 6P next to the BoomSound speakers of the HTC M8S and found the 6P is just as loud, just lacking a bit of the mid-range padding that makes HTC’s phone speakers so special. Google says the ‘P’ in the name stands for premium, and it’s pretty clear there are no half measures in this phone. This stands with the screen too.

The Nexus 6P has a Samsung-made Super AMOLED screen of 2,560 x 1440 pixels. It’s probably a very similar panel to what we saw in the Galaxy Note 5. Very big, very sharp, bright and with immense contrast, it’s a terrific screen. 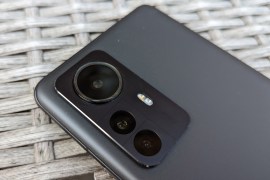