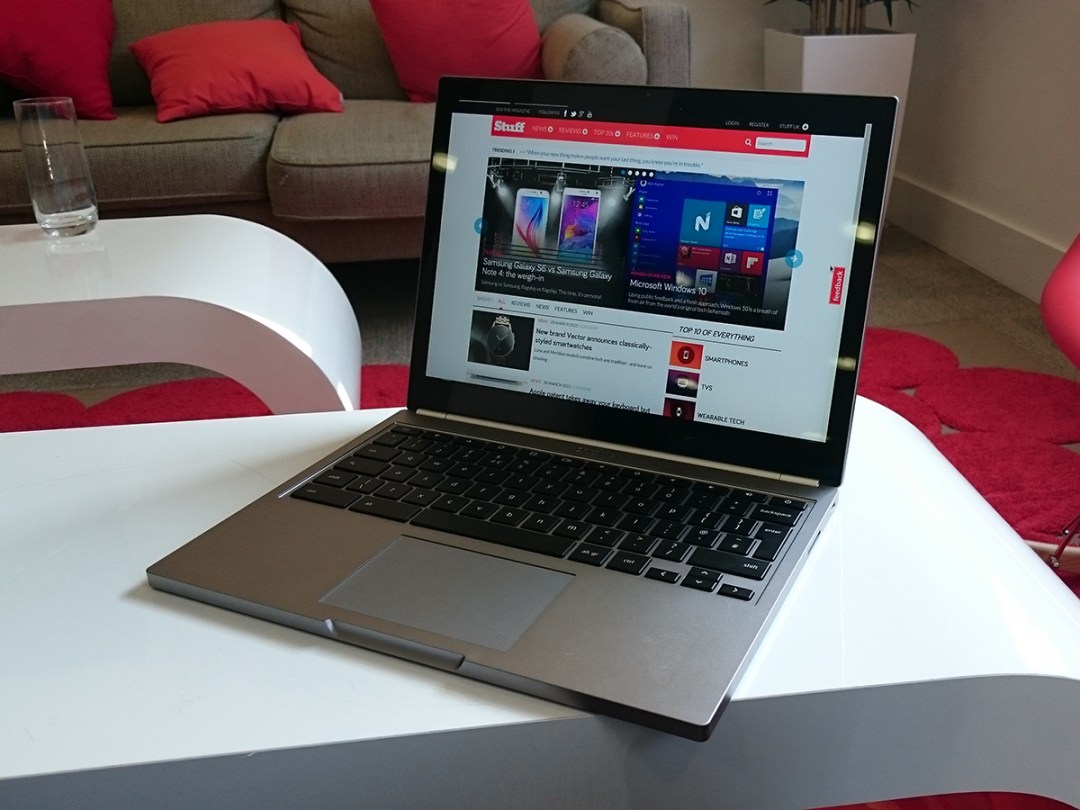 Before we get into this review, I should explain that I’m a fan of the Pixel.

I’ve been using the original for over a year now. I use Macs for work, because magazines are almost all made on InDesign, but I default to the Pixel for most of my writing and web browsing, because the keyboard, touchpad and (touch)screen are the best I’ve used on a laptop.

I’ve always thought that if it had better battery life and cost a bit less, it would be the ideal porta-puter. And whaddaya know…

The design is still very attractive indeed, with a lighter hue than the previous Pixel. The light bar on the lid was previously just Google’s classy little riposte to a glowing fruit, but now you can give it a soft tap and it will give you a subtle-but-smug display of how much battery is remaining.

Because it uses USB C charging, and because there’s a USB C port on either side, you can charge it from left or right.

Once you realise how useful and sensible and neat that is, you will experience a few moments of intense rage thinking about the years you’ve spent not being able to reach power points and spilling drinks over carelessly draped cables.

Screen of dreams (also keyboard and trackpad of dreams)

Let’s sit it next to its closest rival in price and specification, the most basic 13in MacBook Air. They have the same battery life and they cost about the same (the MacBook is £50 more expensive). They trade a few blows – the MacBook is a little lighter and has twice as much storage; the Chromebook has a newer, faster processor and twice as much RAM.

On the keyboard, the trackpad and the screen, however, the Pixel gives its rival a sound thrashing. The MacBook’s display has 1.3 million pixels; the Pixel, true to its name, has 4.3 million. Not only is the screen much, much sharper, it has better colours and it’s designed for the web.

Think about the shape of this web page: if it was made of paper, it would be one long sheet, and accordingly the Pixel’s designers have made a taller screen with 3:2 aspect ratio. The MacBook Air’s display is a 16:10 widescreen that works for movies, but makes you read websites in smaller chunks.

With its huge resolution the Pixel’s screen is still good for films, although you’ll get black bars above and below, but it makes websites look beautiful. And you almost certainly spend more time on the web than you do watching films, especially on your laptop.

It’s got the power

The new Pixel is noticeably more powerful than the first model. The old Pixel was, thanks to the lightness of its operating system and apps, ferociously quick, but it would get rather toasty when you showed it something demanding, the fan was eager to kick in, and it did so audibly.

The new machine runs a great deal cooler – we’ve struggled to find anything that can get the fan to kick in – but the real benefit of its new innards is in battery life. Our experiences so far have roughly matched Google’s 12-hour claim. It’ll easily do a full day’s work on battery alone, maybe two.

It’s not just a browser

Of course, the main reason everyone says you should just shut up and get a Mac is the software. After looking at several top 10 lists of the most downloaded and most pirated programmes, it becomes apparent that there are three things people want. They want antivirus (apparently, huge numbers of people don’t see anything ironic in downloading cracked antivirus software); they want Microsoft Word; and they want Photoshop. ChromeOS doesn’t run any of these.

But wait! Before you drive to the nearest cliff and, bellowing with rage, throw your Chromebook into the heaving sea: it has Word and Excel in the form of Office Online and Google Docs (guess which one your Chromebook wants you to use). If you’re lucky enough to be using Adobe’s closed beta trial of cloud apps, it does have the latest version Photoshop; but as you’re probably not, Pixlr Editor is about level with Photoshop CS2, and it’s free.

As for antivirus, people don’t really write malware for ChromeOS. There are some dodgy Chrome extensions (although they’re not generally more malicious than a bit of adware), but if you use two-factor authentication on your Google account and keep an eye on what you add to Chrome, a Chromebook is generally more secure than a regular Windows or OSX machine.

Google hasn’t done a great job of pointing out how well Chromebooks work offline: everything in Google Docs can be worked on offline and backs up to the cloud when you reconnect. Apps such as GMail Offline download your inbox like a regular email client, and you can work on pictures, videos and play games without a connection.

But it is a one-way ticket to Castle Google

So what’s the catch? It’s this: ChromeOS is great for simple utility and nice free software, but if there’s one thing it excels at, it’s gluing you to Google like you’re a deep-sea male angler fish mating with, and slowly being absorbed by, a much larger female deep-sea angler fish. Like using Firefox or Opera as your browser? Not happening. Need Exchange email for work? Sorry.

And even if this doesn’t affect how useful the Pixel is to you, it’s still a slap in the face; there’s a big difference between using Google’s services because they’re great, and using them because Google gives you no choice.

If you're the sort of person who likes to invalidate a warranty, the Pixel could be for you. Thanks to the efforts of the developers of Crouton, it’s an afternoon’s work to convert a Pixel or other Intel-based Chromebook to run Linux, giving you a ‘proper’ desktop OS that runs Steam, Open Office and a huge selection of other software, including powerful (and free) alternatives to Photoshop, Final Cut and others.

This also frees you up to use any browser or email client you like, and you can keep ChromeOS running alongside Linux for extra convenience. This effectively turns the Pixel into a lighter, Linux-running MacBook Pro Retina – although I repeat that it may invalidate your warranty and make Google angry with you.

So that’s what the choice boils down to. If you need specialist software to do your job, you need a computer that runs that software. But for a great many people, the most important things about a computer are how you put stuff into it – the keyboard, trackpad and touchscreen – and how you get stuff out of it – the display and speakers.

On these, for £800, the new Pixel cannot be beaten. The new Pixel comes within a hair’s breadth of five stars. It is a superb laptop. But it’s a superb laptop that still only lets you run one browser, and until ChromeOS becomes less Googtastic, developers won’t make nice apps for it and it won’t realise its potential.

The hardware is stunning, but the total commitment to Google will be too high a price for some

Far from limited to online use only