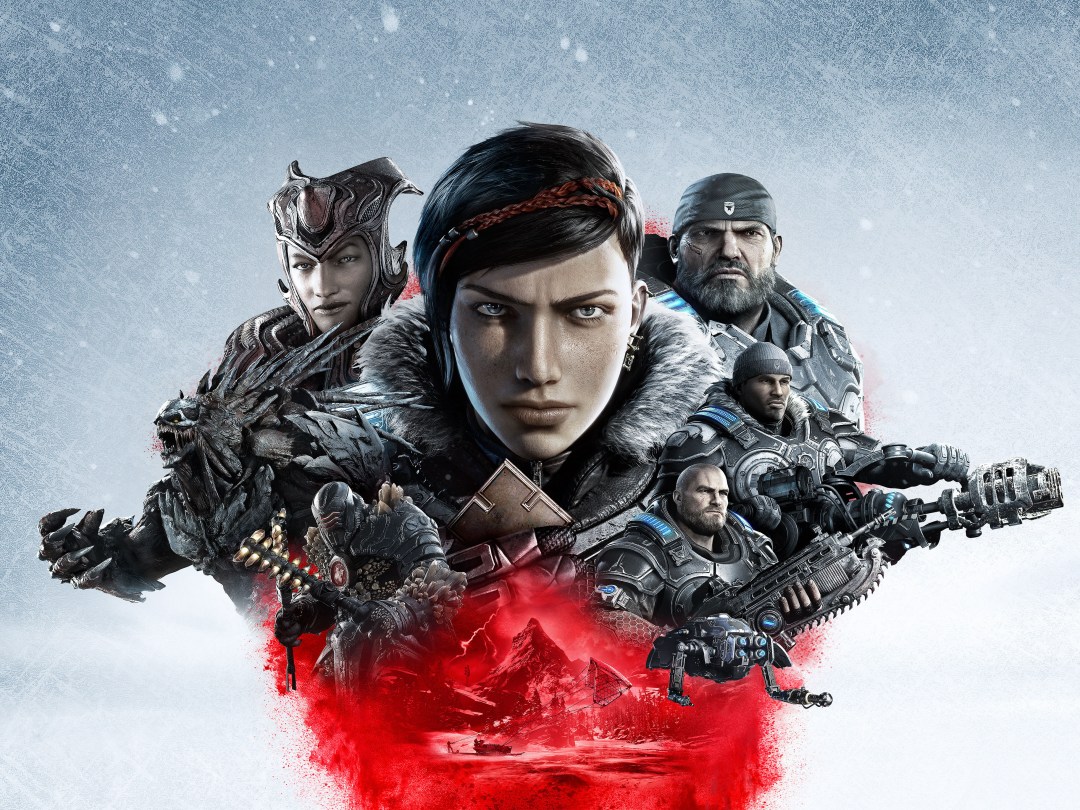 And now with Gears 5 (confusingly, the ‘Of War’ has been chainsawed off the game’s title), new series developer The Coalition is making a statement about what a Gears game can actually accomplish. This is a bigger, more expansive and broader game than ever before, but also tighter, smoother and more refined. Congratulations, Game Pass. You’ve got your big ticket item.

After a breathless first act (of four) where you control Gears of War 4‘s JD Fenix, as he and the crew battle the encroaching Swarm and push them back out of the imaginatively-titled Settlement 2, Gears 5‘s campaign takes a turn for the… bigger. For the first time in the series, open world elements are introduced, although don’t worry, it hasn’t turned into a Ubisoft game.

Instead, you’re given huge areas to explore on a Skiff – essentially a land-boat – and while you’re constantly directed towards story objectives, there are little side missions to discover and complete. It makes the world feel so much larger than before and helps significantly alter the pace of the action.

If Gears 4 felt like a new studio trying its hand at one of gaming’s most established franchises, then Gears 5 is a much more confident team planting its flag in the blood-soaked ground, and truly redefining what these games can be.

The skiff itself is a joy to control too, shredding across ice and drifting through snow and sand, and while the open areas aren’t packed with icons and endless activities, there’s enough to make exploration feel worthwhile. Indeed, some of the most tense combat encounters in the game are actually hidden away in small side quests, so it’s well worth spending the time to follow those question marks on your map.

Despite the new open approach, this is still a cover-combat game, and the action has never felt slicker. Seriously – if you’re not playing this on Xbox One X and in 4K (or a beastly PC), you’re missing out – just the sheer responsiveness alone makes such a difference when bouncing between low walls and severing Swarm heads from meaty bodies.

But it also looks absolutely stunning – a showcase for the power of the box (one that really makes you wonder just what Scarlett is going to deliver next year), and a gorgeously gruesome combination of HDR-strewn vistas and chunky, grisly bad guys.

One true twist to the gunplay, though, comes in the form of robot ally Jack. This guy’s been around since the early days, but now he’s Jack 2.0 – a genuine support character with upgradeable skill tree, and who can actually be controlled in combat. Jack can be used to send a pulse out across the battlefield to scan enemies, drop an electric trap to stun Swarm, or cloak the Gears as they scoot between cover.

There are more abilities to unlock as you progress, and each can be upgraded using components found throughout the campaign. It adds a new layer of strategy that Gears has never had before.

Once the campaign is dusted in ten-or-so hours (a little longer if you’re searching out every side quest), there is so much more to sink your Gnashers into. Competitive multiplayer has changed a lot since the original game’s tense single-life scraps.

Here, the 60fps action keeps things moving fast and furiously, and if you’re coordinating with a good team, it can be extraordinarily satisfying, especially as each team now has characters with specific traits and abilities.

However, be warned. People have been playing Gears since 2006 and know their way around knee-high cover. Getting squashed by a good team can be horrendously demoralizing, as those FPS skills you’ve honed over the years aren’t all that useful if you don’t know the intricacies of Gears’ movement, cover-smashing and dodge-rolls.

Matchmaking will be crucial here. With a host of new players coming in from Game Pass, hopefully the elite will be kept far away from those just starting out – otherwise Gears 5‘s multi will once again be kept purely for the hardcore.

Here, three new characters, all with their own abilities, must escape a Swarm hive, all while the venom bomb they planted creeps through the hive behind them, Hang about too long and you’ll die, rush ahead too quickly and you’ll… yeah you’ll die.

Each mission becomes a puzzle, as you figure out the most efficient way of clearing each room, using each character’s abilities and taking out enemies without running out of ammo, or dying.

Areas are broken up by safe rooms so you can catch a breather (and restart if you wipe), and each mission culminates in an epic firefight that’ll push you and your team to its limits. Victory unlocks new ways of making the challenge even trickier, which in turn unlocks more rewards.

It’s a fantastic new mode and breathes life into the package – especially if you’re tired of Horde and lack the nerve for multiplayer.

Truly the main event the Xbox One desperately needed after years of disappointing or underwhelming exclusives, Gears 5 is significantly better than the enjoyable Gears Of War 4, and a reminder of the power of a console exclusive that’s given the full backing of its platform holder.

And amazingly, if you’re paying the 7 quid a month for Game Pass, you get it for nothing else. An astonishing value proposition, and the title Game Pass needs to take it to the next level. Fantastic.

Absolutely packed with the highest quality content. Gears 5 is huge, thrilling and feels expensive and luxurious at every turn. Absolutely essential.

4k60 takes Gears to the next level

Escape mode is a fantastic addition

Multi still has the potential for horror