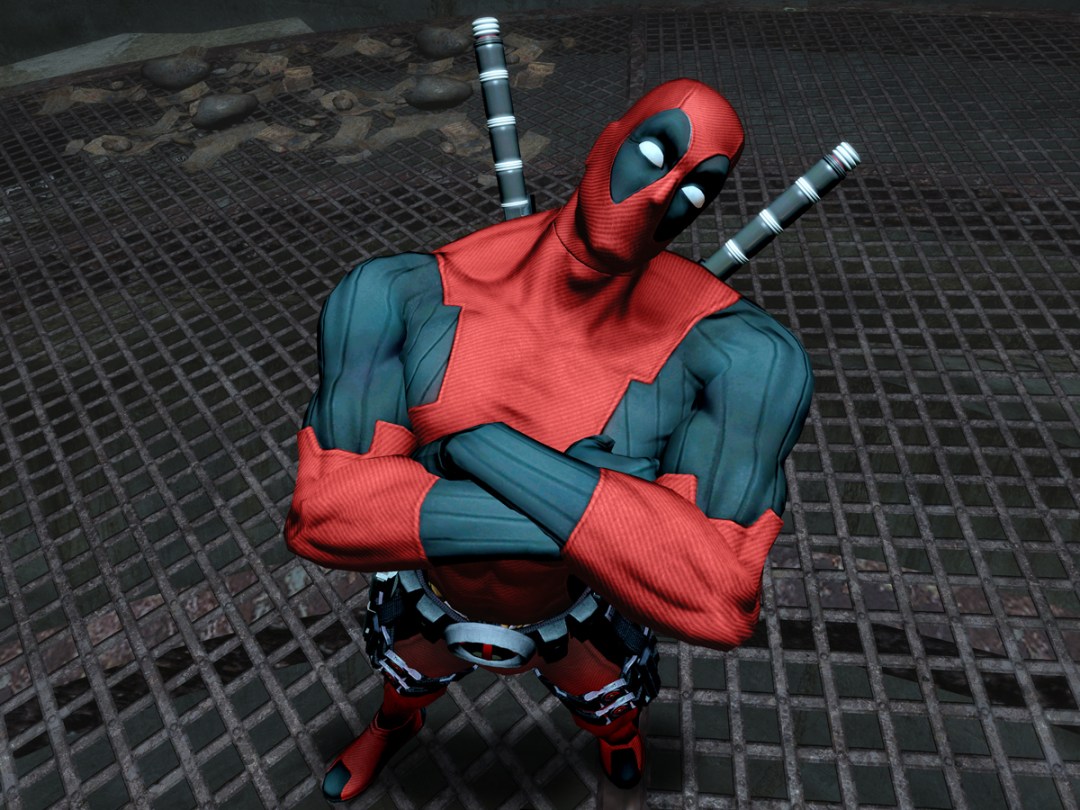 Marvel’s Deadpool character has become a bona fide fan-favourite – not bad given the label’s extensive roster of much-loved superheroes and that he’s only been around for 20 years. The villain-turned-hero combines many of the X-Men’s best abilities (rapid healing, teleportation, superhuman strength) with a unique sense of humour and the ability to “break the fourth wall”, addressing his audience directly in a series of witty one-liners. All of which is crammed into the Deadpool game from High Moon Studios, the team that made the recent (and surprisingly decent) Transformers games.

To say that Deadpool nods and winks to the audience would be a massive understatement; it’s undoubtedly the most tongue-in-cheek videogame ever made. It starts with Deadpool actually pitching his own game to developer High Moon, and then blowing up the studio when they turn him down. Deadpool constantly speaks to the player, calling out clichés in the script, making lewd jokes, and berating you if you’re performing badly. There are some extremely funny moments, and the script tries its best to keep the one-liners fresh, but there’s still a great deal of repetition, and the crassness will tire even the most juvenile of players after a while.

Deadpool’s gameplay could be described as a cross between Batman: Arkham City and DmC: Devil May Cry. Individual buttons are used for light attacks, heavy attacks, and counter-attacks, as well as firing your weapon and throwing a grenade. The idea is to chain together different moves without taking a hit, and if you’re successful you’re rewarded with special momentum attacks that take out multiple enemies at once.

Sadly, the combat system doesn’t have anywhere near the depth or complexity of the games previously mentioned, so combat quickly becomes a repetitive exercise in button mashing. Deadpool’s platforming sections are also particularly weak – there’s little precision so the light and floaty physics mean you never feel like you’re going to land exactly where you want to.

Every now and again Deadpool will initiate a stealth section, where you have the option of silently killing your opponents. The takedowns are stylishly executed; Deadpool will spin around the enemy and lop his head clean off or smash his head between a pair of giant hammers. It’s amusingly fitting for the character, and not at all stealth-like, but it works well within the context of Deadpool’s universe.

The man who plays Uncharted’s Nathan Drake, Spec Ops: The Line’s Captain Martin Walker and Assassin’s Creed’s Desmond Miles adds another leading videogame role to his credits list in Deadpool. It’s not the first time North has voiced the character – he was the first person to portray him outside a comic book for an animated series. He does a fantastic job here, voicing the demented sides of Deadpool’s psyche with aplomb, which are miles away from the more serious work he’s commonly known for.

Deadpool starts out with his blades and a couple of pistols, but as you progress you can unlock hammers, shotguns, grenades and lots more by spending the points you collect from fallen enemies.

This adds a bit of variety to the combat, but we found it more efficient to spend all our upgrade points on one set of weapons as quickly as possible. Especially as we weren’t able to max out all weapons and abilities in one playthrough.

In comic books, Deadpool is notorious for playing with the conventions of the medium, and he does exactly the same with videogames. There are 8-bit homages, side-scrolling platform sections, demented fairground rides. There’s even one section in which Deadpool’s head gets snapped round 180-degrees and you have to navigate using a reversed control system. These moments are the best thing about the game; the genuinely insane surprises mean you always want to see what’s next.

Deadpool doesn’t offer amazing value-for-money: our playthrough clocked in at a little over six hours on medium difficulty. There’s a challenge mode to play through if you want to get competitive, but there’s no multiplayer mode. We were also disappointed that there wasn’t an option to restart the game with all your unlocks intact.

The only extras to speak of are the character cinematics that play through the game – they’re funny, but you’ll have little reason to watch them for a second time.

Deadpool’s inventiveness, humour and voice acting just about make up for its repetitive combat and short length. The outlandish set pieces and comedy cinematics are excellent, but they’re only modest rewards for slogging through the action and platforming that make up most of the game. It’ll keep fans of comic books and toilet humour entertained for a weekend, but not much longer than that.